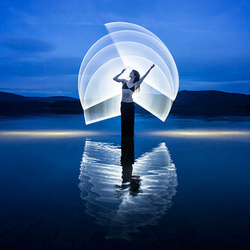 "Visual artist Eric Paré toys with the concepts of time, light, and space with his signature light photography. Each enchanting image is expertly brought to life through long exposure. Paré’s portfolio showcases a bewitching collection of images that explore the delicate beauty of the human body hypnotically paired with light and movement."
- My Modern Met

Eric Paré is a Canadian light-painter. His work has been featured on CNN, MTV, BBC, Vice and TEDx. Over the last years, he did workshops and conferences in cities such as Dubai, San Francisco, Mexico City, NYC and Toronto. Most of his pictures are lit by hand in a single second with no intentional external source of light. When he is not traversing deserts or traveling by sea, he can be found in his studio in Montreal where he creates 360 degree images using 84 cameras. His most recent international projects were made in partnership with Adobe, Twitter, Intel, Canon and Microsoft. He’s also behind the concept of the “Tube Stories” which consists of doing light-painting using a simple plastic tube. Thousands of people have joined this movement, and this forms today a strong community of photographers.