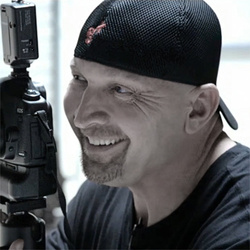 Tony Mandarich has always aspired to greatness, and fervently believes that to do exceptional, extraordinary things, you have to be willing to break the rules, and go where others won't.

He played college football in the mid-1980's, was twice named All American & twice named Big Ten Lineman of the Year. In 1987, his team won the Big Ten Championship & the Rose Bowl.

Tony was the second player selected in the 1989 NFL Draft. He was an offensive tackle whose pro football career with the Green Bay Packers & Indianapolis Colts spanned a decade.

All the while, Mandarich was thinking big, crazy creative thoughts. His love for photography began in 1989 in Venice Beach, CA. Tony himself was being photographed for the cover of Sports Illustrated Magazine and was fascinated by how photographer Gregory Heisler "shaped light" to create his images.

After he retired from football, and after years of perfecting his own craft as a professional photographer, Tony Mandarich achieved prominence and renown for his uniquely compelling images...sought-after by art directors, ad agencies, and digital marketers.

These pictures are uniquely his, and all are images that make viewers stop, take notice and pay attention.

"Tony uses his vivid imagination to create composites that grab viewers by the knees."