A photographer has captured footage of an intense bear fight from just feet away, which saw the two animals growling, launching at, and attacking each another.

The incredible footage was recorded by nature photographer and guide Tero Pylkkanen, who was camping out in Kuhmo, Finland. Simply titling the video "Best bear fight ever," Pylkkanen uploaded the footage to YouTube.

The three-minute long incident took place just 33 feet (ten meters) away from where he was situated. He says he waited around an hour before the first bear showed up. It was upon the arrival of the second, another hour later, that the brawl broke out.

Speaking of the lucky moment to PetaPixel, he said:

I was in the bear hide with my family and these two bear were following each other maybe a couple of hours, and then luckily they took action in front of our hide.

Pylkkanen was also keen to establish that the aim of the bears is merely to establish dominance, not necessarily to mortally wound each other.

It seems the long wait was worth it, since the end result was such a close-up perspective of n intense fight between the two creates. Check out the clip to see the action for yourself.

Education / November 8, 2017
Making Unique Pictures in a Location That You Have Shot Many Times

Was this the Toon Town re-enactment?

I am not completely sure I would like to be there and see it in person, these animals are a little bit to powerful for my comfort, I think it is amazing to see this, a big thank you to the photographer that shared this.

Great video. I'm not challenging that this is a fight, but it seems pretty similar to what my two cats do a few times every day, and they are best buds. I'm wondering if the experts would say this was more of a domination dance and back-and-forth dynamic rather than a true fight. Nonetheless, great to watch -- thanks!

It was certainly a dominance disagreement. Neither beast was actually looking to seriously injure the other but it also wasn't play. There is a reason the smaller fella ran off with blood pouring from his nose. Had the little one not backed down quickly once it realized how much it was outmatched, I imagine this battle would have turned a lot more violent and possibly led to the death of the smaller bear.

It was a real fight. Dominance fights are real fights. In nature, very rarely do animals actually take things to the point of serious injury, neither side wants to get actually hurt, although serious injuries and even death can occur. I am not sure what you mean by "real fight?"

If you mean that one bear was trying to eat the other, and that is the only real fight, then no, that was not the case. But pretty sure if someone came up to you and started beating on you, and then said "I wasn't fighting, I was only trying to show you how dominant I was," that you might take issue with his definition of fighting.

wow. That was incredible! Such massive and powerful creatures! Terrifying.....but cool.

It's funny how the little bear that got beat was holding onto that tree while bleeding, like a boxer on the ropes. This was amazing although it was obviously a territorial or dominance fight. Must have been awesome to see that up close and personal, hope they had a gun or bear spray ready.

Do the Fstoppers writers also work for petapixel, or do they just wait a few days to a week after an article is posted there and then "write" one up for here? 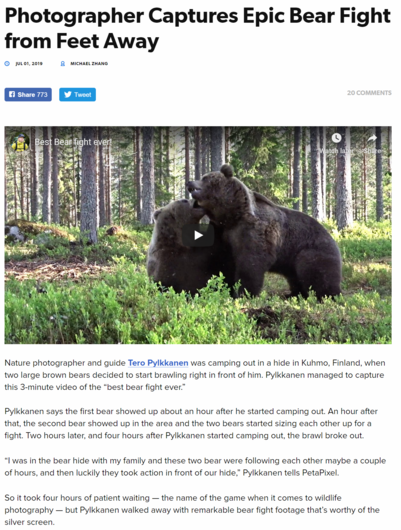 I was in the right place at the right time once and photographed a grizzy bear fight right to the death where a boar killer a sow. People alway ask to see the photos but a lot of times can't get through them they are very bloody, it is nature raw and uncut. The fight lasted 20 minutes and it was savage. I also was only a few feet away but I was in the boat and kept the engine running. They didn't even notice me while they were fighting but I have a picture from after he killed her where he looks straight at the camera and it's defiantly a threat.