I was recently hired by the team over at TheRealMach5.com to shoot new marketing images of the "the only officially licensed Mach 5 in the world that was built to the Speed Racer cartoon Mach 5 specifications". As you can see from the video, it was a hot hot day. I was probably suffering from heat stroke and a wicked farmer's tan by the end of the day, but I got to tear around in the Mach 5 on Florida back roads after the shoot (thankfully she's street legal if you don't drive with the spinning saw blades on it haha), so it was completely worth it.

I originally met Len Mosco, the owner of "The Real Mach 5", through my personal "Unicorn" photo series dedicated to TV and movie cars. Len is one of the sweetest guys you will ever meet. I say this honestly. The guy is just so very enthusiastic about his friends and family as well as any project he touches. One of Len's biggest motivating factors in having this car made was to have something he and his son could bond over and enjoy. Makes me wish I had a cool dad like that!

"The Real Mach 5 is the only officially licensed Mach 5 in the world that was built to the Speed Racer cartoon Mach 5 specifications and includes a wrap around windshield, cartoon body lines, working saw blades, working periscope and special illumination headlights. It is a fully functioning, street legal car that has been driven at high speeds and on super speedways. The Real Mach 5 was built exclusively for Len Mosco by California custom car fabricator, Mark Towle and was signed by the voice talent of the original cartoon series including Peter Fernandez, who was the voice of Speed Racer and Racer X. ( Mr. Fernandez passed away July, 2010 ). The Real Mach 5 was featured on NBC TV in The Macy's Thanksgiving Day Parade and featured narration by Matt Lauer, was seen on the TV show, Gearz, with Stacy David."

My buddy and amazing car photographer, Garrett Wade, came out to the shoot to help out and teach me how to do my first rig shot (the rig was made by: Rig-Pro), as you'll see in the video and the first image below. I will preface this, as I have in previous blog posts here, I am a portrait guy that loves to shoot cars, not the other way around (I mean I enjoy photographing people a lot, but I believe I'm better at that than I currently am with cars). I really enjoy learning new skills with every car shoot and do my best to push my boundaries a bit creatively. I still really get inspired by the work of some of my  car photographer buddies: Garrett Wade, Nate Hassler, Webb Bland, Andrew Link, William Stern, GF Williams, and a bunch others. Car photography combines my love of automobiles and offers this old dog some new creative challenges. 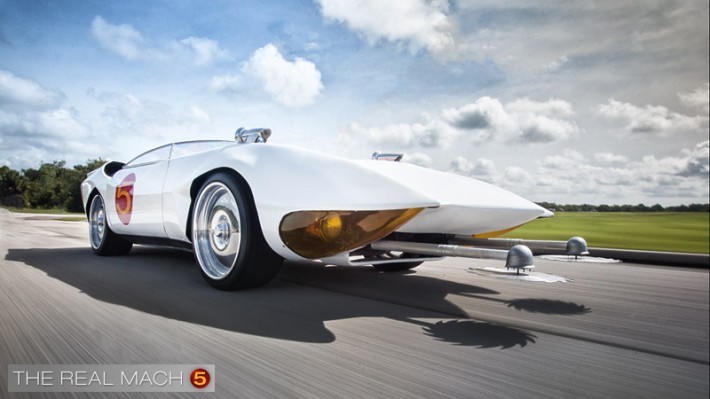 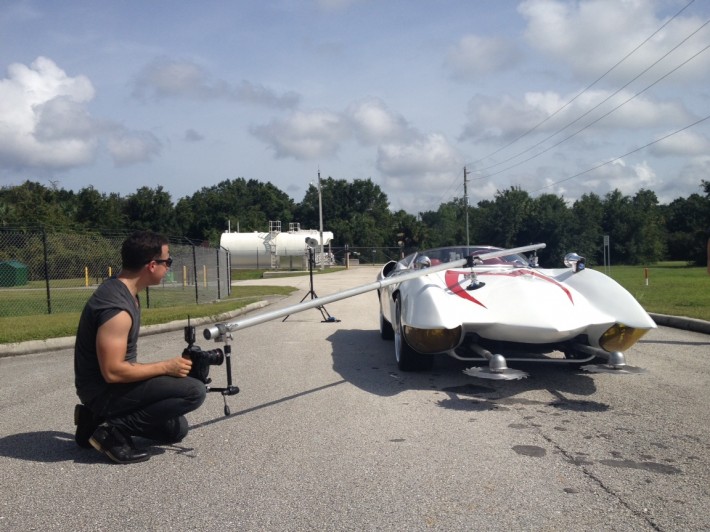 Setting up the Rig-Pro that Garrett was teaching me to use, working on that farmer's tan

I brought along my Phase One IQ160 medium format to do this shoot (aside from the rig shot... didnt want to risk the camera). It's 12.5 stops of dynamic range and cinematic-style large sensor was fantastic for pulling details out of my highlights and shadows and offering a nice depth to the photos (below is a good example). I used my trusty White Lightning strobes and a few Vagabond Mini battery packs, which seemed to hold up for the entire shoot. We had a generator on hand just in case. 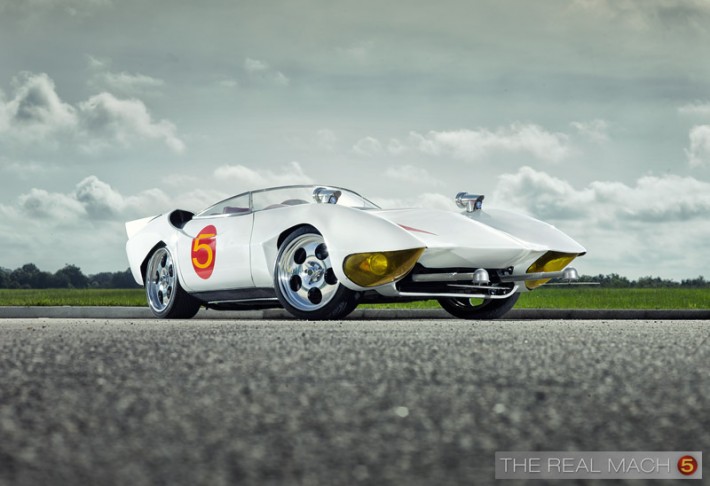 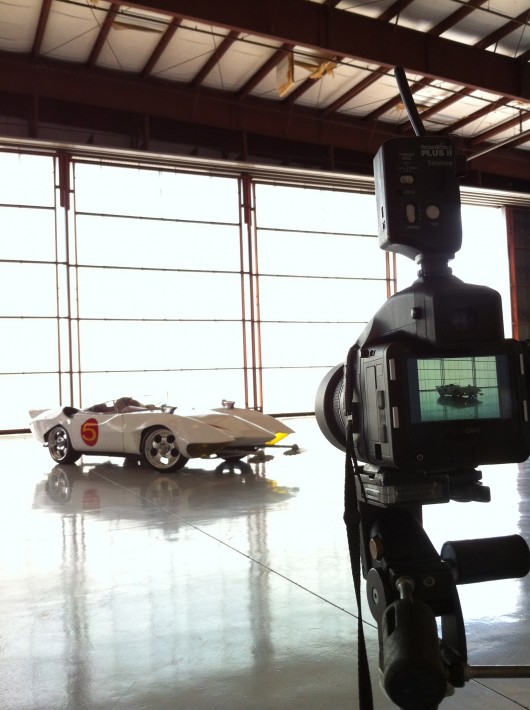 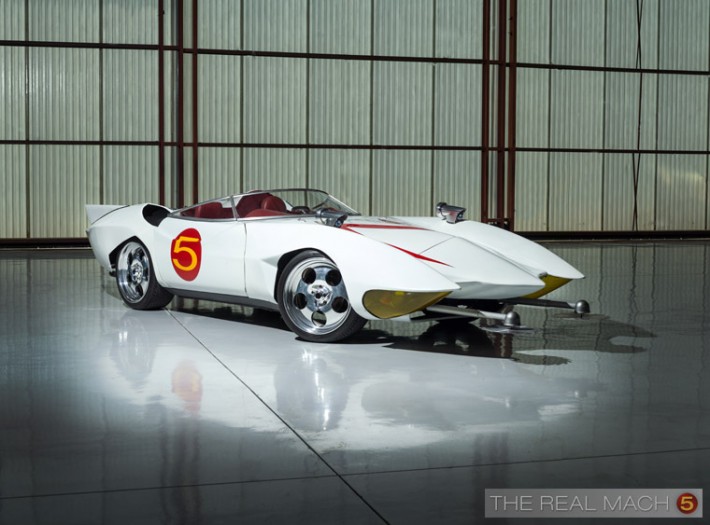 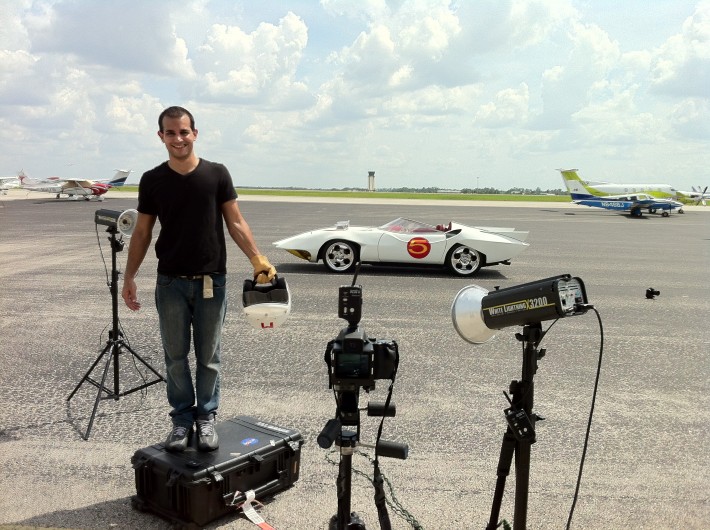 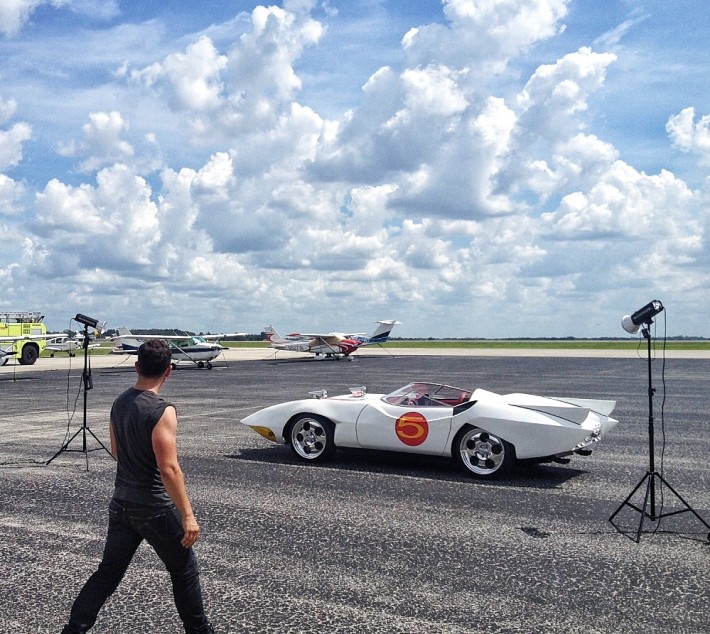 You can see the clouds are pretty epic. By using high powered flashes and closing down my aperture and ISO to compensate, I was really able to create a moody image. This is a technique I often employ with my people portraits. Farmer's tan in full effect. 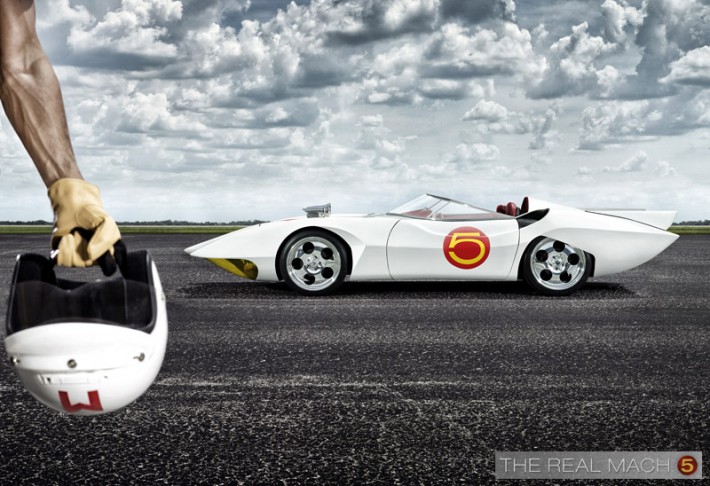 My favorite of the set. Almost doesn't look real, but those clouds, the car, and the arm are all real.

Driving the car was quite a memorable experience to say the least. It's based on a Corvette chasis and is capable of high speeds, although I was honestly very cautious to push the vehicle to its limits. This is despite the fact that Len Mosco handed me the keys and told me to really go crazy with the car... I mean... he really wanted me to push it hard. He just shook my hand and sent my assistant and myself on our merry way. Len's last bit of advice as I drove away in his one-off priceless hand-built vehicle? "Have fun!" It's moments like this that I question when my life and career had become so surreal.

In true movie and tv car fashion, it's made to represent a cartoon vehicle which isn't always the most ergonomic design. Speed Racer was not a tall guy, so I don't know how he could see over that long hood or behind him without the help of a rear camera, which this car actually has (it pops up electronically like a periscope... pretty awesome). Although, the feeling of dropping the pedal down to the floor and hearing the V8 engine roar and seeing confused/horrified/shocked faces of pedestrians as the actual Mach 5 flew past them became quite hilarious and addictive very quickly. You find yourself gripping the steering wheel and looking at the true-to-tv buttons and wishing if you pushed one, that you would actually fly up in the air. Take THAT New York City traffic! Now, I've been very very lucky to drive a wide variety of high end exotic vehicles, and this has to take the cake as one of my favorite driving experiences. In the end, for me, its not always how fast you go... it's how young and alive you feel doing it. 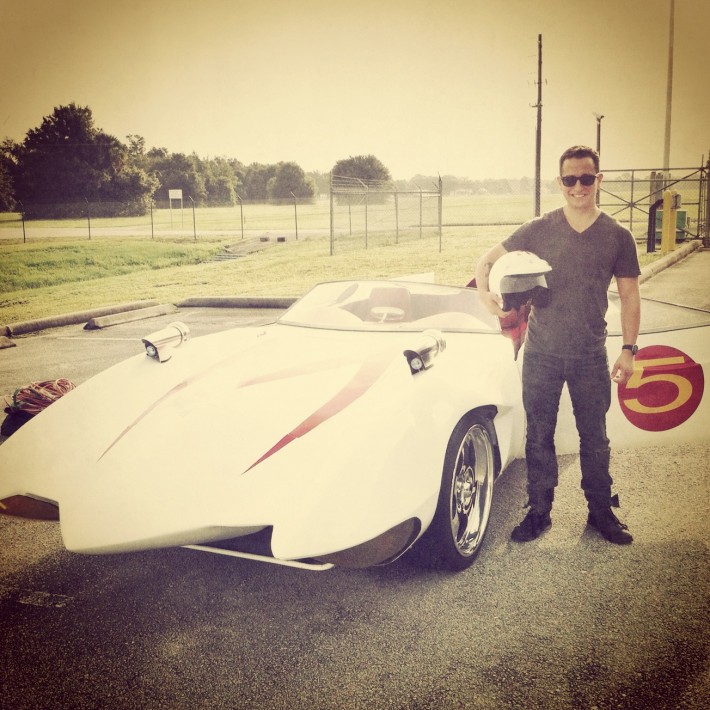 Look at this dummy. Like being 16 years old again. Right before my drive in the Mach 5.

To learn more about the vehicle and how you can get a chance to see it, go to TheRealMach5.com

You can see more of my work here: www.SondersPhotography.com

He did a great job. The post looks perfect.

Fun stuff.  thanks for sharing Douglas!   Love your BTS stuff.  There is always something to learn from.

Excellent post and video!  Seeing the behind the scenes footage on how you photographed the car and also what you guys did on your down is pretty awesome!  I definitely dug the rig shot a lot and the tip you gave for that is awesome.  I'm going to have to try that out.  The post overall is great.  The cool thing was you got this job by building a relationship and from working hard with your craft.  It goes to show that with hard work and building great relationships goes along way!  Cool to see that you had a blast!  Keep rocking it!

its funny how your processing/shots always gets me swinging from one opinion to another. I love the image from the tarmac and the shot in the warehouse is wonderful.... but i really cant stomach the shot with the arm in it, yet this one is the one you said is "all real". Always a joy to see your set ups and work though. Really interesting and i love photographers that make me go from one feeling to another :)

See I thought that was the most killer shot. It reminds me of this advert done for the HYPER EXPENSIVE Richard Mille watch.

I wonder if the saw blades actually spin fast enough to cut anything hahaha or is it just a prop? ;)

wow, i really like them! specially the one with "the arm in it"
How is this "look" called? tony