Fan of the TV show “Doctor Who” and the Beatles? Well then, last week was your week indeed. The cast and crew decided to recreate the legendary 1969 “Abbey Road” album cover along with two prop Dalek cyborg aliens (always thought they were robots, but upon further fact-checking, they are in fact cyborg aliens). The actual road itself is in a busy portion of London, so you will feel completely under the gun if you attempt to do any shoot there while completely blocking it, which is why they took less than a minute to do it. Read below to see the lightning fast behind-the-scenes video.

When the previous generation Acura ZDX debuted, one of my ad agency clients wanted a photo of the car in New York City's crazy busy Times Square. They only had a vehicle for a few days and called me last minute to make the shot happen. If you know anything about permits in N.Y.C., I had no time to get a permit to shoot at this busy intersection before we lost our chance to shoot with the car. Although, the nice lady at the city permit office suggested that if we never put light stands down, we would only risk a parking ticket at the most.

We parked the ZDX at the W Hotel the night before, which is on the same street, and chose to wake up at dawn on Sunday morning to make the photo happen. All we had to do was back it up half a block from the hotel valet stand and place it right in the middle of Times Square. I had two assistants with flashes on transmitters powered by battery packs walk around and light paint the car in between red lights while I also stood in the road. Probably had four to five minutes total and then quickly got out of there. We got the photo and escaped with no tickets or brutal vehicular injuries! (Note: I know the car above is an MDX. After we succeeded with the ZDX photos, we snuck an MDX in there and got a quick few photos of that too).

So what's your fastest location shoot story? Would love to hear in the comments section below.

My "fast shoot" was not anywhere near as troublesome at Times Square. Just tried to get a car shot in a cool alley in a crowded mall. Got beeped at a couple of times... and had to have my son drive around and around for each try. Here's the shot. 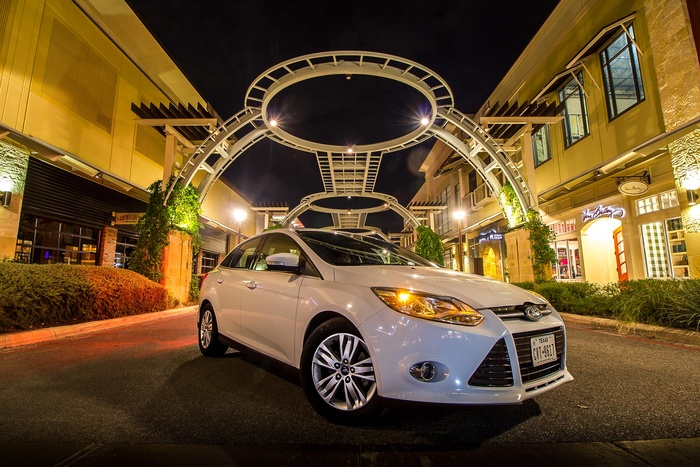 I shot from a crane hanging over a freeway offramp to get photos of a Harley Davidson Love Ride. Dip low for the bikes, then up quickly as trucks passed just a few feet beneath us.

In hindsight, this was not the brightest idea, but I got some cool shots. Ironically, none of them got published, but the very first frame I shot in the crowded streets did.