Storms are either captivating or terrifying, depending where you stand on the subject. Sometimes, the literal place in which you stand can mean the storm is both captivating and terrifying. That was the case here.

I love storms, but here in the U.K, they are rarely big enough to frighten you. I remember as a child sitting by the double glass doors at the back of my house watching as a storm lit up the sky while I eat my dinner. However, the storm we have just had here packed a little more punch than we're used to. We've had an uncharacteristically long heatwave this summer, and just when we had reached the point of moaning about it every other sentence, it broke in the form of gale force winds, hail, torrential rain, and widespread thunder storms.

Photographer and videographer Thomas Heaton ventured out to storm chase (as much as you can call it that here in England), but got a little more than he bargained for. Initially, the storm was manageable, but as these things tend to happen, it escalated very quickly and Heaton had to flee to shelter. Sometimes videos like this don't do real justice to just how bad the weather can feel. While in Iceland, I was on one of their black beaches trying to capture a long exposure of the sea during a storm. I buried my tripod in the sand so it stayed still, and I covered my whole setup with a rain mac designed for this sort of situation. I grabbed my mobile phone and attempted to film just how horrendous the weather was but it largely just sounded windy as it didn't pick up the rain and sleet. It really gives you stronger respect for the storm chasers over there in the U.S and tropical climates; the mood can change in a heartbeat.

Have you ever been caught while photographing a storm, and left more shaken up than you had expected?

I really like Thomas, both for his work and his humility. It was nice to see him try something new, not necessarily get the results he was hoping for but still share the adventure. I think it's important for photographers to try something new once in a while. It's a nice reminder that you may be an expert in one area, but a total novice in another, which gives a new respect for that style of photography. This is one of the reasons why I often try different styles.

I've never been caught photographing a storm, but I've walked to work in a typhoon more times than I can count, and went to an izakaya (a kind of bar) in a thunderstorm... because Japan.

100%, refreshing to see in today's tsunami of hype.

Several years ago I set out to shoot some amazing clouds that were being generated by unsettled weather in the Norfolk, Virginia area. I went down to a beach access where I had a good shot across the Chesapeake Bay, and shortly after I set up I noticed a cloud that seemed to be tumbling across the sky. I switched to video, and was very pleased to catch a waterspout that formed and went through its entire life right in front of me. I'm attaching an image just to show how close it was. 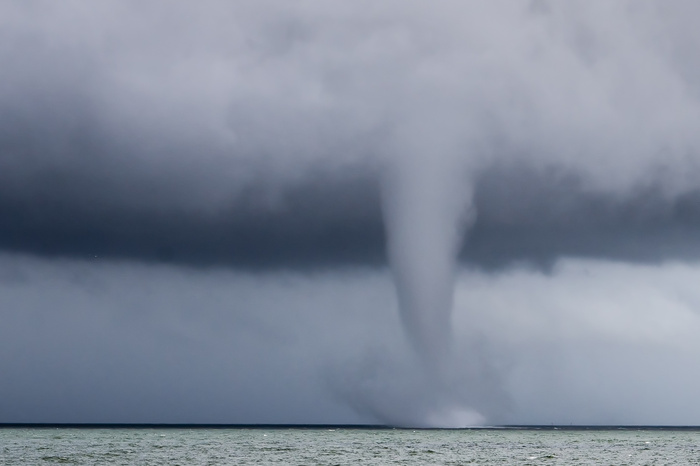 Such a likeable guy.