Build and Photograph Your Own Miniature Set Using Only Household Items

With the holiday season in full swing during December, I decided to put my camera down and focus on coming up with new ideas and concepts rather than just shooting straight away. Being a big fan of Felix Hernandez Rodriguez and the miniatures he brings to life through his photography, I decided to build my own set and photograph it.

Starting off with just a table in my studio and a rough idea of what I wanted to create, I started looking at references online, and soon the image I wanted to produce became clear. As this was my first attempt at creating a realistic looking scene consisting of miniatures, I decided to keep it simple: two old cars driving down a dirt road at night during a snowstorm.

Next up was the execution. I only needed some basic materials. I needed to create a landscape, and I needed to create snow. Luckily, I have a whole garden from which I can source soil and decided to use some of it to fill my table. After I was happy with the way the soil was laid out on the table, I used standard baking powder and carefully sprinkled it across my landscape, creating snow.

Pleased with the results, I set up my composition, placed two small toy cars on a dirt road I built down the middle of my landscape, and proceeded to photograph the foreground image. For the background, I added a green screen to make the postproduction a bit easier. I kept the lighting very simple, by using one light from above, bouncing against the white ceiling, and another light to fill the green screen material. The key light was enough to sell the illusion of a lit sky dome. The rest I'd leave up to Photoshop.

Once I was happy with the results of my test shots, I started shooting the final image. I decided to use the focus stacking technique to get both cars in focus, as my Canon 100mm f/2.8 Macro doesn't give me deep enough depth of field in one shot and thus, wouldn't sell the illusion that it's a life-size image. I proceeded to focus on the front of the set and take a shot. Once I was satisfied, I adjusted the focus ring of my lens to focus a bit further back and took another shot. I repeated this until the focus was at the rear of the set.

After importing all my images on to my computer, I opened up Photoshop and started stacking them to create an image where both cars are in focus. Once the images were stacked, I added my backplate and special effects to the scene before saving and exporting it for online use. 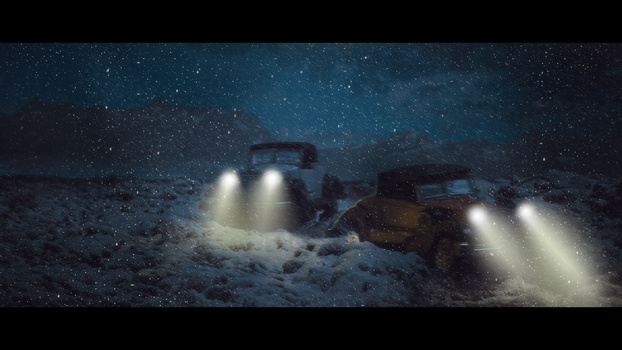 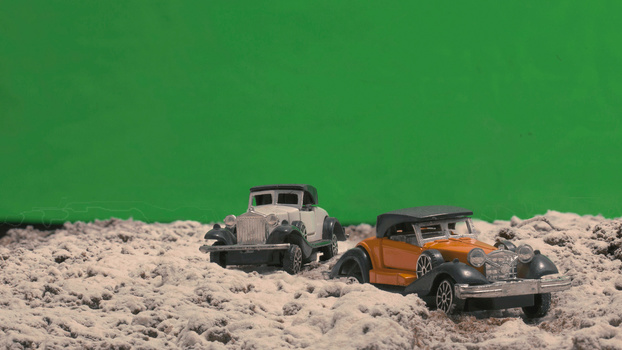 If you want to learn more about how I created the set and the entire process in Photoshop, have a look at the video below.

What's your experience with small-scale sets and miniatures?

Almost everything is computer generated, I don't know why he even bothers in photographing the cars.
And the final image is bad, so artificial.

If someone is interested in this thing, here you can really see it done correctly:
http://www.hernandezdreamphography.com/work

Not everything needs to look like Hernandez's work. It may not be 100% photorealistic, but it has an artistic flavor to it that makes it work.

Thanks for your comment! Yes, I merely took inspiration from his work. My intention was not to copy. I wanted it to look more like an illustration rather than a photo. The point was to have fun in studio and not take it too seriously :)

Thanks so much Bob!

Fun little project to try while we are in a deep freeze.

It definitely is! Hope you are staying warm!

Oh my gosh I love this!! So cute but also great for commercial portfolios, I see so many commercials and ads with mini sets. Tiffany Co's entire winter campaign was miniature.

It opens up a whole new world for photography. I can honestly spend hours in the studio just building sets and photographing it. I didn't realise Tiffany Co also used miniatures, I'll definitely check it out. Thanks so much for checking it out and commenting!