Avoiding Catastrophe While Flying a Drone

I’ve had a change of heart about how I feel about the law and operating a drone. A few months ago, I would have done a basic risk assessment and then flown, even if it was illegal. These days, I will only fly if I can operate entirely within the law. In this article, I’ll explain why.

The below video has proven to be very controversial among British drone flyer circles. It is from a BBC television program called “Casualty.” The program is a medical drama that was first broadcast in 1986. For the context of this clip, consider the opening scenes in a TV series like “House M.D.”; the scene that explains the injuries and problems that the doctors solve for the rest of the episode. It is not an anti-drone campaign or a warning about the potential consequences of drones.

The reason it has been controversial is that in recent times, drone operators have received a lot of negative press in the U.K., especially since the Gatwick incident where the airport was closed for two days due to an alleged drone sighting. If the general public were already suspicious about drone operators, they are now hostile towards them. The main objective to the “Casualty” video is that there is no evidence that a plastic drone would destroy the rotary blades of a helicopter. It causes unnecessary worry among the general public and adds to the negative public sentiment about drones.

I take the opposite view however. Although this clip is clearly over the top, it does get me considering what would happen if I caused an incident with my drone that lead to serious injury or even death. The chances of that happening are extremely slim, but if it did, the consequences would effectively ruin my life. The video below shows my first and only drone crash. I flew my drone around a hill where it lost signal. As soon as it did, it tried to return home and for some reason, did not bother avoiding obstacles. Although this crash proved harmless, imagine if something similar happened and it crashed into a moving car on a highway.

Consider home insurance for a minute. The chances of your house burning down or being destroyed in a natural disaster are relatively slim, yet most of us take out home insurance, because the consequences of such a disaster would be catastrophic without insurance.

This brings me back to flying a drone. The law in most countries around the world states that any commercial work with a drone requires public liability insurance. This is also true for many commercial shoots done with regular camera equipment in the public realm. In the U.K., you are required to have a Permission for Commercial Operations (PfCO) in place before doing commercial work which also includes a flight manual stating exactly how you will be using your drone. If you do not follow this procedure, your insurance is invalidated.

A couple of years ago before I bothered with the law or insurance.

A few months ago, I couldn't fathom why you needed a PfCO to do commercial work. My argument was that there is no difference between taking a photo and uploading it to Instagram versus selling it to a client. I’ve come to appreciate that the answer is insurance. By getting the PfCO, you’re able to take out insurance that will cover you should you cause some catastrophic damage.

There have recently been a number of incidents of people getting hurt or dying while taking selfies. The general agreement is that it no photo is worth injury or death. I’ve taken that approach with flying my drone. Unless I am covered by insurance, I will not fly it where it could cause an injury. This basically leaves me with open water or secluded wilderness.

This is the sort of location I fly now. The closest person is at least 4 miles away.

If you have a drone, how have you approached flying it? Do you make sure you are covered by insurance or are you prepared to risk flying it in certain situations?

No insurance yet, but I make sure I am safe and legal. Makes me crazy all the hobbyists who think the laws don’t apply to them because they aren’t licensed. I’ve had to quit a couple drone groups because the clearly illegally taken photos were making me angry. Ruins it for everyone.

There is a lot of illegal content being created that has gotten the creators a lot of positive attention, however, one major incident and I’m sure a lot of it will disappear.

in germany you can (and should) include yor drone for personel use in yor personel liability insurance. This cost additional 20€/year. Lufthansa offer online training for drone pilots under https://www.safe-drone.com. Airmap app gives you a detailed map of restricted areas. If you follow this guidlines, you shouldn’t harm anyone. A drone business is an other game...

Sounds like a very sensible system. The UK makes it quite a bit of work to legally operate a drone in public spaces, but I think it’s mostly a positive thing.

Thanks for putting the article together. I fly drones, mostly for fun. I never fly unless in the absolute best conditions. Wind will blow your drone like a leaf! I think about all the worst case scenarios and evaluate before taking off. I am nervous about flying and get the drone on the ground in as short a time as possible.

The media have given drone users a really bad rap though. Helicopters are far more dangerous yet receive no criticism. Where as a plane will have a consistent direction, helicopters go in any direction and fly as low as they like. Multiple military helicopters fly 250ft directly above my house several times a day and I don't even live close to an air base. I have seen helicopters fly several hundred feet infront of and behind planes without much care. In Vegas, they even fly 600ft above and across the landing strip whilst planes are coming in to land. What happens if a commercial plane needs to cancel it's approach? This is exceptionally risky behavior that is never criticized.

Nobody really knows the consequences of a drone collision but I feel they are far less severe than is portrayed. I am not suggesting that any risks should ever be taken. Just have a lot of common sense with what you are doing and make rational decisions about safety!

I dont think you can get drone insurance in the US. I would be interested to given options.

My point here is that drone users are immediately vilified where as helicopter pilots (carrying people) have in my experience far more to answer for.

PS. There have been several occasions where I thought there was a huge incident and it was actually just "Casuality" filming on location. As it happens, they even used a house I was living in at the time as a location. The fee paid for some garden furniture!

I agree that helicopters are more dangerous, but to have a helicopter license is not easy (or cheap). I don’t know about the US, but in the UK, if you fly a helicopter in contested areas, the helicopter has to have fail safes in place.

I reckon cars are the most dangerous and also least regulated.

I think people forget how dangerous cars are because there are so many of them. Lets imagine a helicopter tragedy killing 4 people and like wise with a car. Which would get more media attention? Traffic is so bad here that a lot of fortunate people use helicopters. Well, not as much as their cars, but there are lots of helicopters anyway. There are more here than at Westlands!

Helicopters flying around the Vegas airport are strictly controlled. ATC carefully directs the helicopter movements around the airport so as not to conflict with landing aurcraft. Don't be fooled for a moment that they fly nilly-willy as they please like a drone pilot. Helicopter pilots would lose their hard earned license if they ignored the flight rules.

I wasn't doubting the lack of regulation of helicopters in Vegas, however the routes just seems risky to me.

I fly professionally shooting real estate, and since I do have a Part 107 FAA license this qualifies me for liability coverage. I register all of my flights with AirMap and follow all of the guidelines regarding flight ceilings, weather conditions, and safety procedures.

I do know there are photographers and even some real estate agents who are doing their own drone work unlicensed and uninsured, and unfortunately, there isn't anything I can do about that. I personally do think that in order to fly a drone for any reason you should have to get a Part 107 license (in the US), and that the current system makes about as much sense as saying "if you drive a car for Uber you have to pass a licensing exam, but if you just drive a car for fun then you don't need one." It's idiotic and seeing drone pilots who are completely unaware of the rules or have no regard for them is pretty frustrating.

Hi,
I've had the safest drone that can be bought with money. GoPro Karma has spent 97% of its time on warranty repairs.
Anyway, I am now flying with Mavic 2 Pro here in Finland, and it is possible to obtain liability insurance if you use it for professional purposes. For hobby photographers, I have not yet found any type of insurance.
I use my drone at times when there are least people on the go. My new drone is registered with the traffic authority. The registration costs 20 euros per year. From the traffic authority I got an app that I can report a flight through.
The green box in the pic shows me the highest flight height allowed in the area I am in. If there are any kind of restrictions the box will turn out red. In the middle of the picture can you see a picture of an aircraft that is shown on the map immediately after a registration has taken place. This is very handy. I never need to think about whether it is allowed to fly or not.
Unfortunately, there are many who do not care at all about the safety of others and I believe that these people will cause the rules for using drones to become more stringent in the future.
Kind regards from Finland
Carl 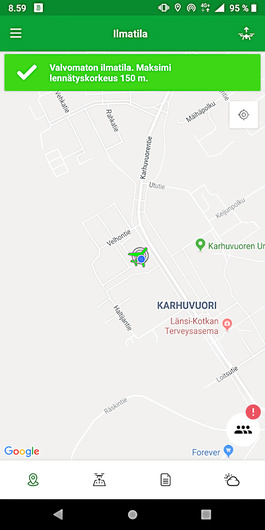 Haha, that’s a raw deal with the Karma (I sense a pun). Great advice and info regarding flying in Finland.