The National Archives was found last month to have altered an image of the 2017 Women’s March in Washington D.C. Some of the protestors' signs had been artificially blurred for use in an exhibit. Internal emails now suggest that little debate preceded the alteration.

A Desire to Avoid Offense May Have Offended

Photographer Mario Tama captured the photograph below during the Women’s March that took place in Washington D.C. the day after the 2017 inauguration. The image was recently featured in an exhibit at the National Archives celebrating the centennial of women’s suffrage. In it, demonstrators line the streets near the Capitol Building, many of them holding protest signs.

In the version of the image used in the National Archives’ display, the text of some of the signs had been digitally blurred. The words “pussy” and “vagina” had been removed, as had the president’s name. The alterations prompted a backlash in the media. The National Archives soon apologized, removed the altered version of the photograph from the exhibit, and vowed to replace it with the unmodified original.

They also recently followed up by releasing a series of emails related to the decision to modify the photograph. The email chain appears to suggest little prior discussion of the decision and a basic desire to make the image suitable for the broad range of audiences that might visit the display. At least some of the alterations were made in coordination with Getty, who owns the copyright to the photograph, as their standard editorial license agreement doesn’t allow images to be modified. The National Archives had asked for and received permission to blur potentially offensive words from some of the signs, since they often host school groups and families with children.

It doesn’t appear, however, that removal of the president’s name was specifically okayed with Getty, and this was clearly done for a second purpose. National Archives’ spokeswoman Miriam Kleiman said: “we blurred references to the president’s name on some posters, so as not to engage in current political controversy.”

The ethics of digitally manipulating photographs are complex and context dependent. The subject can certainly be a bit contentious, even when the photographer themselves views the images as simply fine art. Recall the controversy surrounding Steve McCurry a few years back. The complexities arise in no small part due to the different roles photographs are asked to play in society and our own varied and preconceived expectations of them. What’s far less up for ethical debate, however, is the modification of imagery taken for the express purpose of photojournalism or the standards expected of archivists whose role is to record historical documents without altering their content or meaning.

What’s perhaps most worrisome, then, is that it didn’t register with anyone at the National Archives that altering an image of a historic moment was a significant decision. Obviously, there’s an array of concerns that the Archives must address in the context of a public exhibit, but there were also likely multiple ways those concerns could have been addressed. If they were worried about engaging in “current political controversy,” then refraining from including images in the exhibit that specifically represented ongoing political controversies would have been easy and perhaps the best solution. After all, in this case in particular, the photograph makes no sense outside of that political context and controversy. The event was a social response to a political outcome taken the day after a presidential inauguration.

Alternatively, the unmodified image could have been used with a warning about graphic content or the image could have been blurred, but with an accompanying notice about the location and type of information removed, the reasons for doing so, and a link to the original image online. Simply blurring out critical content from a journalistic image without alerting viewers to even the existence of the alterations was possibly the least desirable approach.

The misstep also comes at a time when trust in the media is at historically low levels, at a time when different political factions have trouble agreeing on even a shared set of facts. A non-partisan government agency found to be altering representations of historic events can only further erode confidence in both the imagery itself and the standards to which photojournalistic imagery is expected to be held. Given the precedent, one could be pardoned for thinking it might be worth going back through and “adjusting” some other historical images. The image on the left below is certainly less likely to ruffle the feathers of any thin-skinned misogynists than the original. Just a bit of blurring here and there doesn’t really change the meaning or historical significance, does it?

We might also wonder, then, whether to clean up some of those nasty images of lynchings. Wouldn’t want to risk offending anyone, would we?

But isn’t that the point? Some aspects of history are offensive. We should be offended.

Finally, there’s the terrible irony here in whitewashing, literally, the words of women expressly taking part in a march to protest the lack of voice that they have continued to feel in the century since they achieved the right to vote. That this whitewashing was done in an exhibit whose purpose was to celebrate an act of women’s empowerment kind of leaves one scratching their head. 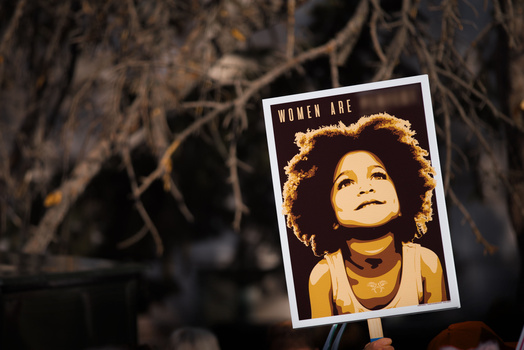 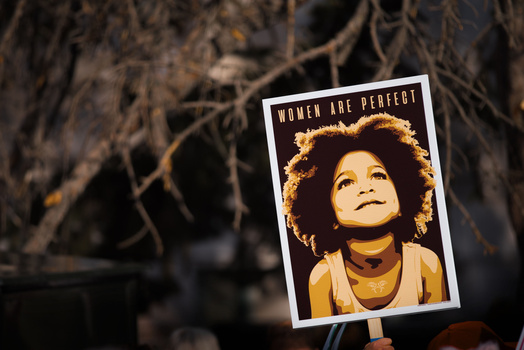 Denver Women’s March. January, 2017. No harm doing a little “touching up” here and there, right?

Blurring elements of a historical image doesn’t just change the image’s meaning or alter the context within which it should be understood, it also inadvertently reveals something about those who would do so, what they perceive to be important, and whose voices they’re willing to sacrifice if they become inconvenient.

I love to travel and explore, to share glimpses of the world and its stories through photography. My wife and I live in the foothills above Boulder, CO where we rock climb, paddle, and hike. I have a doctorate in physics and hold down a day job researching solutions to national security challenges.

Thomas Bowdler thought Shakespeare was bit saucey, so he cleaned it up and published his own. Now he looks a bit silly.

(from Wikipedia)
. In Hamlet, the death of Ophelia was referred to as an accidental drowning, omitting the suggestions that she may have intended suicide.
. "God!" as an exclamation is replaced with "Heavens!"

Who told the Archives there job is to censor history?

Does Fstoppers have a policy of distinguishing a commentary piece from factual reporting, or are they intentionally intermingled In order to deceptively portray the former as the latter?

No. Bloggers want to be journalists without having the need for journalistic integrity or consequences.

I disagree about editing the context of a photo as being wrong, but that's a subjective view.

Edited because I can't read and misread something then went on a long sarcastic tangent that served no purpose.

"'Blurring elements of a historical image doesn’t just change the image’s meaning or alter the context within which it should be understood.'"

Uhh, yes, it in fact does. That's how context works."

Yes. That's what he was saying the whole time. It says "doesn't just change," not "doesn't change."

I obviously misread that line, and thank you for correcting me. But the entire article is still trying to make a point that it's wrong to do so, but I'll concede that it's a matter of opinion. Editing my original statement because I can't read apparently.