Submit Your Best Photos Of Plants 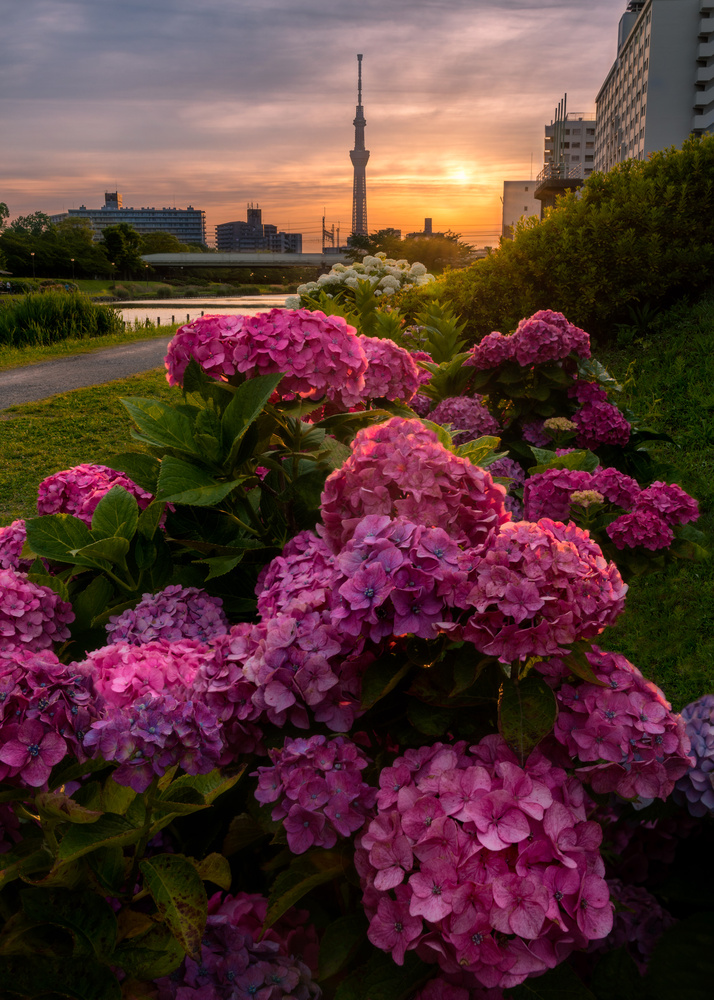 Tokyo isn't known for its nature, but if you know where to look, you can find lots of natural beauty.
This is a focused stacked image made up of 5 separate photos to ensure sharpness from front to back, and to ensure the sky was not blown out.

Hey Jordan, I asked how you would rate this image to see what your process was and your answer confirmed my thoughts. I only give this feedback because I have done this soooo many times myself! I think this is an image that you have gotten so invested in because of the work you've put into it that you are seeing the high quality of the edits and not the image anymore. I've done this many times too! The image is super well done. The lighting and rich colors are beautiful. Stacking was a great idea. And finding beautiful flowers in your location made this even harder!

The reason I think the image may be struggling in the ratings, however, due to composition issues. The road over the left top of the shrub is distracting and makes this potentially awesome image have a little bit of a snap shot feel. There is beautiful sky, lovely skyline, gorgeous flowers... And what looks like a service road to the river.

The flat faces of the buildings on the right also seem like an odd addition. I wish the perspective could have given them more inclusion or left them out. They make the right side of the image feel heavy. This might work if the left had open space but it has the road as the counter balance.

Lastly - cutting off the edge of the shrub to the left is unfortunate. I think it would have created a more layered, deep image if the entire shrub was there. But, then that darn road would be even more in the image. Ug! A pickle to be sure.

Technically - a 5 star image. Composition is what is hurting it in my opinion. I gave it a 3 star rating because of the obvious effort and technical skill.

I given this with genuine desire to help. I hope you are not offended it was not my intention.

Thanks for the thorough feedback, I think I can explain a few of the choices, some planned, some made on the fly, and address some of the other issues.

As for the buildings, I can see where you're coming from, from a purely "landscape" perspective. In most cases one would want to avoid including buildings in their nature shot, but this picture was taken in Tokyo, which means getting a picture without buildings is next to impossible (at least in Eastern Tokyo). With this in mind, my goal was more to capture the essence summer in Tokyo, not just some flowers and a sunset. The concept was kind of "man vs nature". So the buildings on the top contrasting the nature on the bottom was sort of choice I made out of necessity. That being said, I agree that the majority of old apartments in Tokyo look butt ugly, and I can see why you don't like them. I also see what you mean by throwing the balance off. Perhaps some day I'll go back and see if I can find a way to remove them.

As for the road, I can clear this up, it's not a road, it's a paved walking path along the river ( a sort of nature trail in the city). Just about every river in Tokyo has a walking/jogging path for people the enjoy the limited nature available. They're especially popular in summer, as the rivers provide a natural coolness to the air. I could take it or leave it, but it is undoubtedly part of what makes Tokyo, Tokyo, so it doesn't seem out of place to anyone who lives here. That being said, I can see where you're coming from.

When it comes to the bush, that's simply a gear limitation. I haven't gotten around to getting a super wide angle lens for my new camera, yet. I made the decision to shoot from a perspective inside the bushes as it's not a view the average person will have ever seen before, giving it a unique composition in a popular photo spot. To be honest, I'm not sure how much better a wider angle would look. As you already mentioned, it only detracts from the flowers by adding more of the surroundings.I'm not even sure you could avoid cutting off any part of the bush, as the Ajisai bushes here tend to be quite sprawling. One of my main concerns was to ensure that the flowers filled the frame, while trying not make the tallest structure in Japan look small. I even zoomed in to 27mm, because at 24mm I was already noticing that.

I appreciate the feedback, and the time you took to write it. Your opinions are totally valid, and I wouldn't doubt a lot of people would agree, so don't worry about offending me, haha. My goal was to capture a glimpse of nature in the city of Tokyo, and show the sort of push and pull dynamic between nature and the city, with the limited nature dominating the towering structures the city is known for. Perhaps this is an image that connects better with people from Tokyo, but I hope my break down of choices sort of makes sense. Thanks again!