Canon recently announced the EOS 200D Mark II, otherwise known as the SL3 as the company’s lightest DSLR. Besides being the lightest DSLR in Canon EOS range, it limits users’ abilities to use some third-party manual flashes and triggers.

The EOS 200D Mark II is just another addition to Canon’s beginner DSLR series. It comes with a 24-megapixel CMOS sensor with a DIGIC 8 processor, 9-point AF system, 4K at 25p, and full HD at 60p movie recording capability, built in a lightweight, small body with a tilt-screen. Considering its features, it can be effectively used by everyday creators and beginners who want to dive into the world of DSLR cameras. However, with this release, Canon made a significant change and removed the universal hot shoe pin, which allows the use of third-party manual flashes and triggers. The vast majority of people prefer manual flashes such as Yongnuo and other Chinese brands as a cost-effective alternative to Canon flashes. But with this design update, using these kinds of flashes won’t be available anymore with the EOS 200D Mark II. So, if you have bunch of manual flashes and are thinking about getting this camera, you should consider this change.

Posted In:
Gear
News
via:
Michael The Maven
49 Comments

Ugh. I thought this ended with the Sony/Minolta hot shoes.

It does now. For several years Sony kept Minolta’s proprietary hot shoe on it’s Alpha DSLR’s. They finally killed it off in 2012.

at least they're going forward in a positive direction and not backwards into problems that have already been complained about. 1 company is improving, and the other is clearly not. thats the point of the post. yes Sony made a similar mistake in the past. point is, its gone now, and its NOT coming back. where as Canon should know by now that this is a STUPID decision based on backlash that one of its competitors got and is STILL going through with it. THAT is the focus of the conversation.

Maybe Canon poached some of the Sony / Minolta engineers and management?

@Rob Davis you seem to be a tad confused in your comparison.

Sony took over a proprietary hot-shoe from Minolta, and made decision to honor the current user base and was wise enough to prioritize them over new customers. Also offering a simple adapter with just about every flash/camera they sold during the transition period from proprietary to "iso" standard.

Canon has simply removed the center pin from their "iso" standard hot-shoe. See the difference?

Yeah, I don’t think the company behind the “Memory Stick,” ATRAC and BetaMax were doing it for the honor. They sold their own flashes with that hot shoe for years. That’s beyond legacy support.

For years.. Rob your obviously clueless when it comes to R&D do you think products are developed the same year they are released?

Regardless there were no issues at all using a standard flash trigger or third party flashes as there were adapters available. The first Sony flash HVL-F60 had the proprietary hotshoe simply because that's what the majority had on their cameras at the time.

Again your comparison is flawed, regardless of what you think of Sony as a company.

I owned Sony cameras at that time and there were not adapters readily available. There were eBay knock-offs of which I went through many that did not work. Sony had one adapter that cost around $200. The “catering to existing users” is nonsense. Sony loves proprietary formats. They always have. Maybe they bought Minolta rather than another brand because it fit with their proprietary philosophy.

Not a single thing I said about them is inaccurate. It’s okay that you don’t like it.

sucked in the past, kicking everyone ones ass now. It's okay if you don't like it.

I say good for them. A rising tide lifts all boats. Their fanboys on the other hand, ugh. You’d think they built the cameras rather than just buying them.

Rob, I've shot with sony in a professional capacity since the introduction of the A900, there was indeed a Sony adapter available, if you could not muster 200usd and had to resort to eBay crap that's not the same thing as not having an adapter readily available. It worked as intended and unlike eBay crap, it did not fell apart after a shoot...

I couldn't care less about your opinion on Sony or proprietary formats, the fact that you can distinguish the difference between Sony's approach and Canon's tells me that you if anyone are obsessed with Sony.

That makes sense. I always write 2 pages of rebuttals when I don’t care what someone thinks too.

I know it's hard for you, being a KB and all. But there is a difference between caring about what you think of Sony as a company opposed to "caring" about your inability to differentiate between Canon and Sony's behavior at the topic at hand.

Again you failed miserably to see that Canon has done something very different, they simply removed the center pin, thus effectively crippled their camera.

You care. You care about me. Even though you’re from one of the most emotionally repressed nations in the Western Hemisphere, you care about me. Just let it out man. Tap into it. Maybe you can let your newly found connection to your feelings guide you out of food photography and stock photos into meaningful work.

Yeah, Rob, way to go! Running out of fuel so you resort to personal attacks as well as clueless assumptions. Not that I expect anything less from a keyboard warrior such as your self. Good on you! :-)

Canon wants your money. More than anything else. They've always crippled their cameras and charged extra for it.

That is just pretty and cheap. If Cannon needs to save money on manufacturing, leave off their logo. I am sure it costs just as much to engrave and paint.

This is a crazy move by Canon and I hope it bites them hard.

I hope they don't try this craziness with the pro cameras otherwise we're not going to be able to use our studio strobes with radio links.

Sometimes I do wonder if big company marketing depts actually have a clue? Alienate the cheaper market and be sure they'll never touch your pro kit.

WTF, Canon? I'm hoping for their sake that this is the "hot shoe pin install guy" going AWOL to go watch "Avengers: Endgame" or something.

Makes me love my Olympus OMDs and Godox units even more.

There's a reason why Canon global sales are falling; this is one of them. Stupid business practices.

Canon! Canon! What am I going to do with you?

Thanks for the info. I never would have known, and I recommend Canon gear for many of my students as well. And, since they are (most of them) new to the photography game. they wouldn't know the difference. What a bad move by Canon, especially in light of the recently published crazy decrease in their sales. Having a proprietary hot shoe is the reason I stayed away from Sony. Bad move Canon! Now what will I recommend for my newbies??

I'm wondering if you're not misinterpreting what's going on here. If you mount a *Canon version* Godox trigger, will it still work? I'm going to guess it will, unless they've decided to disable every flash ever made (Canon and non). Without it in my hand, I'll assume that's the case. So what have you lost? The ability to put another companies trigger on and operate it in manual. Yes, that's a bummer. But, even before this, putting another companies trigger on lost hss and ttl immediately- something I'd give up in a pinch, but nowhere near a long term strategy. And remember, you can still buy the Canon version of every third party flash and have them work here and manual everywhere else. The only two areas I could see this being an issue at all- 1) Running two systems, without backups or the ability to use one of my speedlights as a master on camera, and my main trigger breaks. 2) People doing workshops that want to be able to loan out triggers and have run out of "Canon version" ones. Could happen.

Even if the Canon version of other flashes work (I doubt it) things like flash triggers, etc. won't. They all fire on the center pin. Pic of my Wocket Wizard attached. 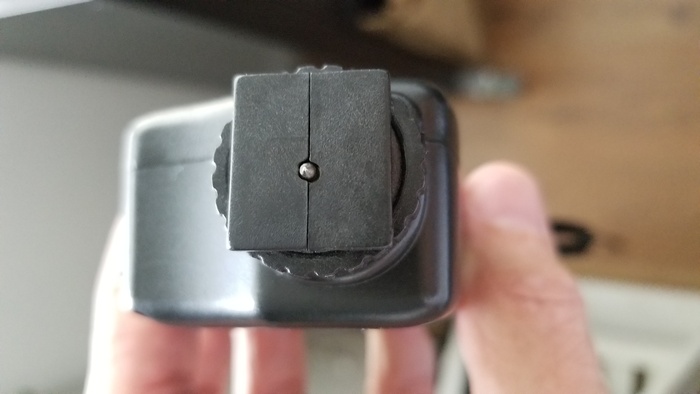 So, with that, you're already missing hss and ttl, correct?

Yes, but not my point. My students are newbies and have beginner gear. Why would Canon alleviate an entire cross section of photographers? If you are supporting their move, so be it. I just don't agree. I think it's a bad business decision, and I will advise future students to be aware. I'm guessing someone will come up with an adaptor. But still, crappy move.

Not supporting or bashing the decision. Walking through what it actually means in real life and don't see it being a big deal. I suppose reading my comments it does sound like I'm supporting it, but only in as much as I think the original video completely mischaracterizes whats actually happening. Forcing users away from Yongnuo or Godox's core line ups to Canon flashes would be a deal breaker. This isn't that. Forcing people away from the $15 knock offs? Sure. Bit of pain, but most people outgrow those in extremely short order anyway.