Do Your Lenses Need MTF Testing?

LensRentals needs to trust that their customers don’t mess up a lens. How can they know for sure?

Having followed LensRentals’ Roger Cicala for years, I understand why he goes above and beyond to test each lens that’s in his inventory. Remember when 2017’s solar eclipse caused a bunch of lenses and sensors to get burned out? This is obviously a problem that shouldn’t be passed on to the next renter.

Would you know if your lens became a little less sharp? Perhaps it might happen via tilting or shifting, leading to less contrast in certain parts of your images. It’s not as if testing and modifying your lens is new. Sigma’s dock can change the autofocus settings and even certain image stabilization parameters. Testing charts are available in a multitude of configurations and sizes to push your lens and camera to the limits.

The Limits of a Chart

Cicala has argued that today’s cameras have outpaced yesterday’s charts. He explains that “a good lens on a 50-megapixel camera will let you see the individual print dots that make up the lines on commonly used test charts.” If you can see each dot in the printing, then the chart is next to useless.

Unfortunately, with higher resolutions, for both photographers and videographers, we need our lenses to be sharper than they’ve ever been. In the eyes of Cicala, a cheap lens won’t stand a chance on a high-end 8K sensor. There’s simply too much detail. “Two percent of lenses that looked fine on chart or projector testing are not really fine.”

That’s where MTF testing comes into play. “Modulation Transfer Function” which is basically a shorthand way of describing the difference between an image and how a lens sees an image. You’ll see a machine in the TRIOPTICS video above that shows how a computer is doing all the calculating for you. Generally, a lens manufacturer will release their own MTF results. However, these can often just be computer models, according to Cicala. When a real test is done, the dirty details come into focus. 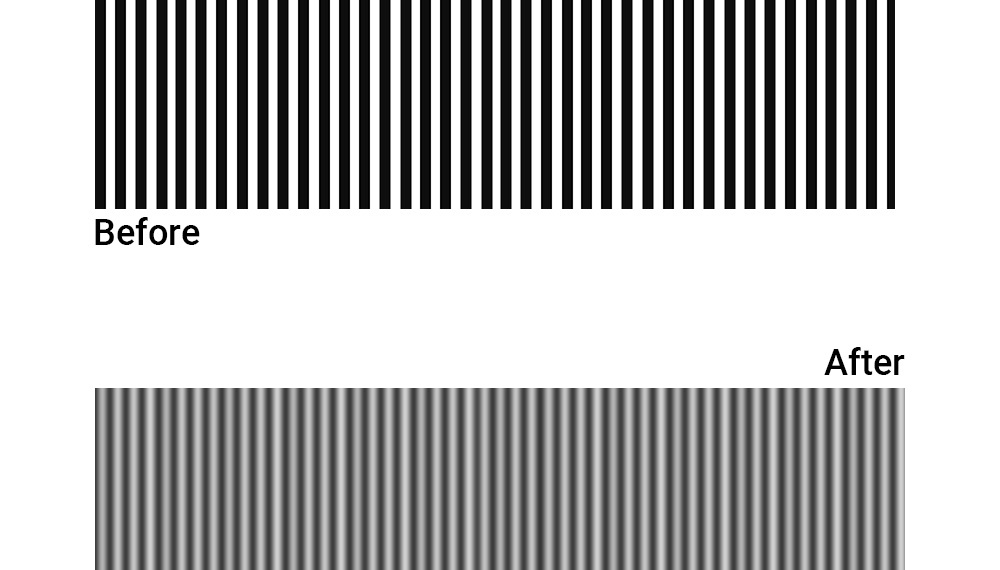 The lack of contrast between the lines is the giveaway of soft focus.

See How Your Lens Stacks Up

LensRentals already has a bunch of MTF test results available, so you might not need to drop the cash on the testing equipment. For example, here’s the Sony FE 12-24mm f/4 G. It’s arguably more detail than you’ll want. For architectural photographers wondering about distortion and cinematographers concerned about their 8K RED cameras, it’s important stuff to keep an eye on.

Cicala has just released an extremely detailed article describing how LensRentals actually does this testing. I’d encourage you to check it out. If you’re concerned about your own lens, then some brief research might let you find the known weaknesses of that model or the glaring difference between your lens and what it should be. Be warned, this is a very complex rabbit hole.

Posted In:
Gear
via:
LensRentals
4 Comments

I rented a Nikon 80-400 for a trip to Seattle, including a whale watching tour, and every single shot was soft or just OOF. Unfortunately, I didn't have time to test it or swap it out before leaving. :-( I can't imagine they purposely rent out bad lenses but don't know how another renter could have screwed it up.

Hi Sam! I have found that because of the manufacturing tolerances and sometimes age of the gear, most Canon & Nikon cameras benefit micro-adjusting (AF Fine Tune) prior to using them. I know this isn't what one wants to hear, especially with either new or high end gear, but it's something that really does make a positive difference. On Nikons, you can only do a global adjustment for the entire zoom range, which means if it front focuses at the wide end and back focuses at the tele end, you have to either set it in the middle or bias it to the end of the range you use most. I have seen brand new lenses and bodies need as much as a +/- 20 adjustment to get sharp imagery. Cheers!

I test, and adjust if necessary, all my lenses. My comment was referring to the first paragraph, lamenting the fact the lens I rented wasn't tested and that I didn't have time to test it myself and then somehow deal with the problem.

Ohh the age of mirrorless! How many times have my newly acquired used lenses gone past the +20 or -20 and I had to guesss at it. Mostly Sigma ones. I do enjoy telling people about the dot tune method though it has helped me with countless lenses.