We know the EOS R1, Canon's mirrorless flagship camera, is on its way at some point, but it turns out that that will likely not be the only powerful RF mount camera we see this year, as another "exciting" mirrorless body is likely on the way.

Canon Rumors is reporting that an "exciting" new RF mount mirrorless camera is likely in the works for this year. There is not much more info at the moment, though we can infer what the company might have in store. Given that we already have the EOS R5 and R6, the mirrorless equivalents of the 5D and 6D DSLRs, and Canon's deep investment in ultra-high-quality glass, my money would be on a high-resolution body, possibly meant to leapfrog the a7R IV by reaching 70-80 megapixels. The other option would be an R7, the mirrorless equivalent of the ever-popular 7D series, Canon's flagship line of APS-C cameras. The 7D series was highly popular, as its crop sensor offered extra reach for wildlife and sports photographers combined with advanced autofocus and burst rates, all wrapped up in a rugged and affordable (compared to full frame options) body. An R7 would likely prove highly popular. Regardless of which body we see, it will be an exciting year! 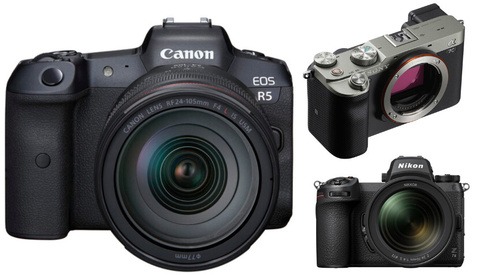 Adobe's recent announcement of Super-Resolution reminds us that AI may make it unnecessary to carry around a 60-80 MP sensor and deal with the huge files. I own the a7R IV and the first thing you learn is that you don't need 61 MP for everything. The problem of course is you don't know that ahead of pressing the shutter.

Add to the fact that most visual mediums are not growing in dimensions at the clip of camera resolutions. Print photography is still declining. Quality photo enlargement by Adobe and Topaz (GigaPixel), among others, are making the diminishing returns on higher resolution cameras an interesting decision point. Not going to say camera manufacturers will give up the megapixel race but from a purely photographical standpoint, the commercial need for higher res cameras is going to hit a wall barring some new market opening up.

What ever it is, If they want it to succeed they better start putting out some RF lenses. This is starting to become an issue.

From what I've read, the adapted Canon lenses work seamlessly. Or did I read the reviews incorrectly?

They do for the most part, however, some people may want to sell their old lenses with their old body, or like myself, I want to upgrade from my EF 24-70 to the RF 24-105, but it's pretty difficult to find one.

Okay...it's the supply chain. That makes sense. Heck, I had to search high and low just to find some entity that had LLK ink for my P800. :-) Epson has had it on backorder for several months, but I finally found a camera store in Calgary that had it. I live in Canada. B&H has it in stock but some sort of rule doesn't allow B&H to ship Epson ink to Canada.

Anyway, maybe with the vaccines getting out there, this supply logjam might finally subside.

They are ok but not great, they are not so sharp with this adapter and focus has a lower rate success compared with the similar RF lenses.

Where did you hear that? The EF lenses are better on R bodies than they are on EF bodies. EF lenses are no less sharp than on DSLR bodies, and focus is more accurate, so you get excellent results. RF glass might be better, but hey, they're new!

I hereby trademark, copyright and all make all other claims on "exciting". I'll brand our products as such and thereby all reviews will be about our "exciting" products. Are you not e̶n̶t̶e̶r̶t̶a̶i̶n̶e̶d̶ excited? You betcha.

My God you chose the perfect username.