The ideal travel tripod should be sturdy and super lightweight with high loading capacity. In addition, it should be compact when folded and long enough when extended. There are lots of compact tripods in the market, but how many of them truly provide these features? Well, I've spent enough time to figure it out and decided to buy a brand that I've never used before.

I've been using Manfrotto tripods for more than seven years, actually a specific model that is discontinued today. It's a known fact that Manfrotto tripods are really sturdy and made to last. My Manfrotto 055XProB (discontinued) legs and Manfrotto 808RC4 head were a perfect combo for studio and outdoor commercial shootings. But, after I started traveling more, it became a necessity to leave my Manfrotto at home and look for a compact tripod with a budget of $250.

So, after a long online search, I narrowed my options down to three popular models: Mefoto, Manfrotto Befree, and Vanguard Veo tripods. Later on, I read some posts state that Mefoto is the side brand of Benro. Even though I haven't seen any proof about this at Mefoto's company website, the similarities between basic models of Mefoto and Benro helped me to beiieve that. So, I didn't add Benro Travelangel tripods to my list. All these brands produce affordable and compact tripods with aluminum and carbon leg options. But as they're already small sized and lightweight tripods, choosing a carbon leg was going to provide little advantage in terms of weight (approximately 200-400 g). Besides, choosing a carbon leg always costs more.

All the models above were considered ideal tripods for mirrorless or small sized DSLR bodies, but what about using with large DSLR bodies? Well, that led me to eliminate Mefoto Roadtrip, because Mefoto Globetrotter was recommended for using with large DSLR bodies. But, the 4.6 lb (2.08 kg) aluminum Mefoto Globetrotter wasn't "lightweight," and the 3.7 lb (1.6 kg), but $399 carbon version wasn't "affordable" for me, so I removed Mefoto from my list. Also, after inspecting the super lightweight Manfrotto Befree (1.1 kg) at a local camera store, I decided to remove that from my list as well, due to its insecure feeling. So, the winner was Vanguard Veo 265AB on paper, but was it as good as it looked?

It was obvious that this model was underrated, because I couldn't find enough information or user reviews about it, unlike Manfrotto Befree or Mefoto tripods. Also, I have to admit that I was quite hesitant about the Vanguard brand. However, their recent VEO lineup attracted my attention, and the overall built quality with five years of extended warranty changed my mind. The Veo 265 is the most advanced of the compact VEO lineup, and the aluminum version weighs only 3.7 lb (1.68 kg), while the carbon version 265CB is only 3.3 lb (1.5 kg). I decided to go on with the $170 aluminum version, because I didn't want to spend extra $100 for 0.4 lb. 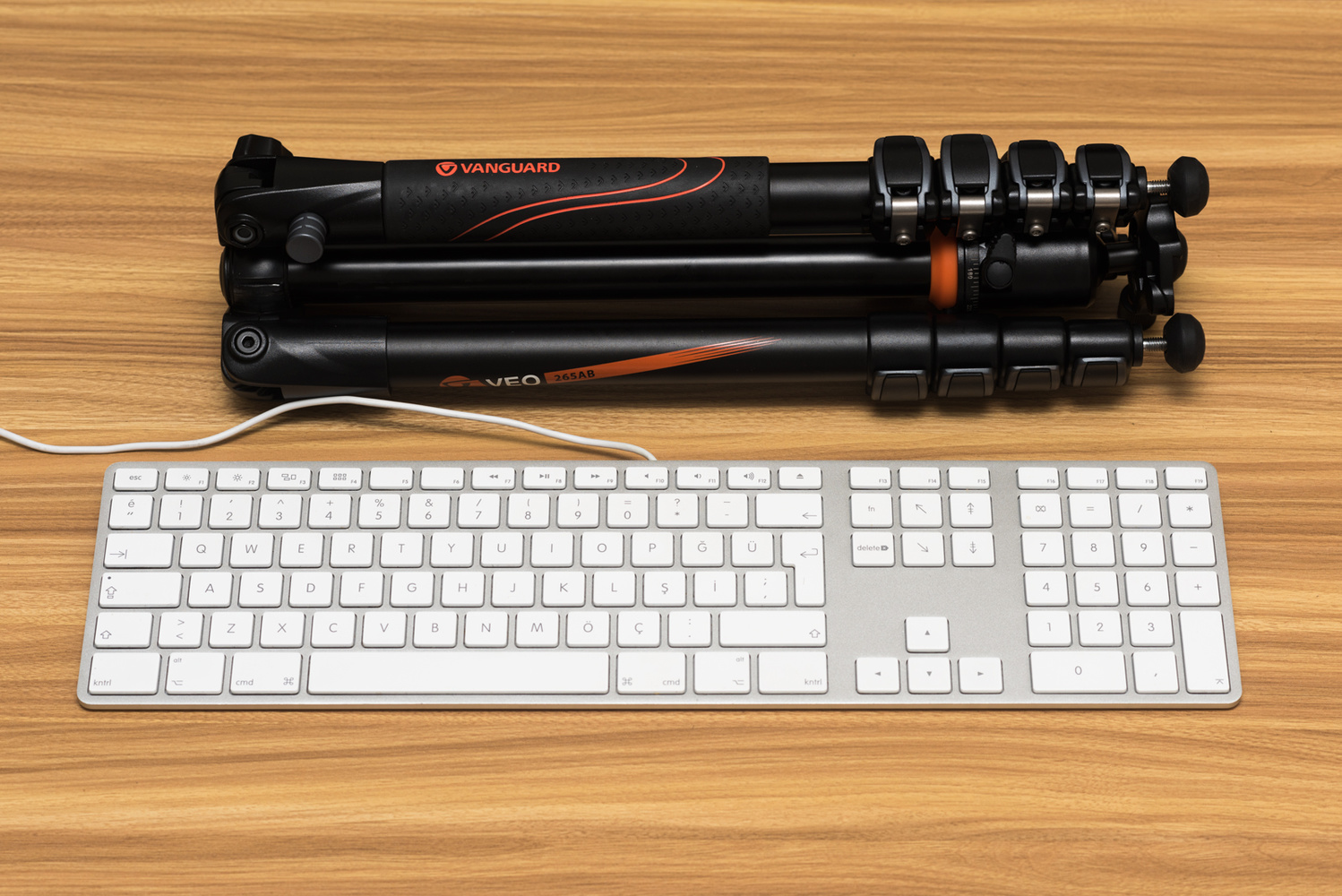 The Vanguard VEO 265AB is shorter than a standard Apple Mac Keyboard.

At first glance, Vanguard Veo 265AB is really compact when folded; it's only 15.4 in (39 cm). You can even fit it into your camera bag or attach it on most camera bags which have tripod connections. It comes with the TBH-50 Ball Head by default, and quite simply, it is a small and basic ball head. Despite it's small size, the ball head is pretty sturdy and precise when it's locked. The only major downside of the head is the lack of friction in the control knob. So, you have to hold your camera carefully when doing micro adjusting for your angle. But there is a good feature for those who want to capture low angle shots or shoot macro photography. You can disassemble the head and switch the standard center column with the short center column, which is also included in the box. When the short column is attached and the legs are wide open, you can shoot at ground level. 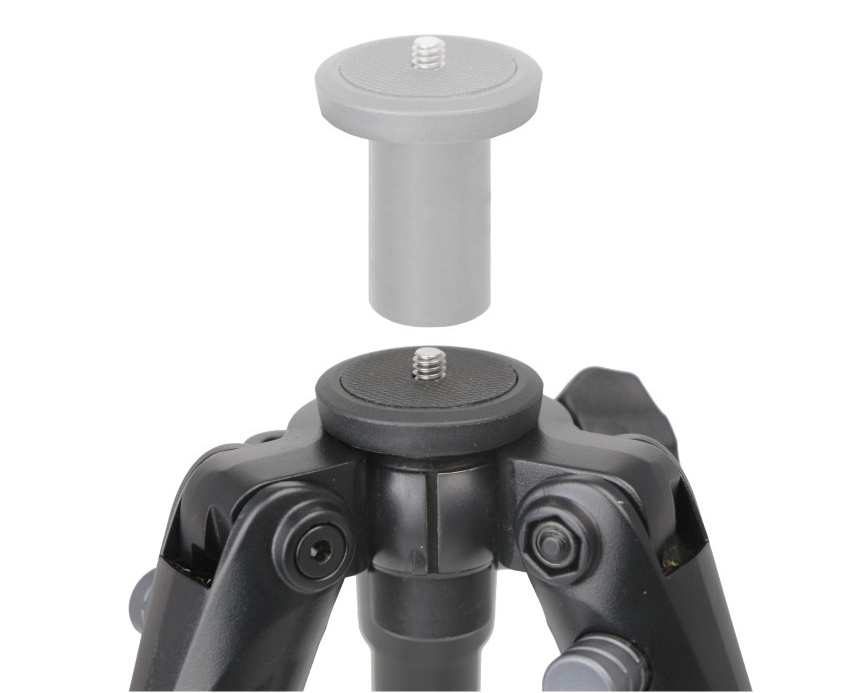 The included short column is made of plastic, but it works well and is easy to carry in your pocket or bag.

It has five-section flip-lock legs (four adjusting knobs), and with an attached camera, total length increases to 67 in (170 cm). Well, for most situations, this length is already enough, but tall photographers should consider another option if they don't want to bend towards their cameras all the time. But hey, how many of us need so much height when shooting anyway? Besides, among the other compact models, this is the best option in terms of total length. As it is a compact tripod, it is always better to add extra weight to increase stability when using it outdoors, but there isn't a hook on the center column. So, as a solution, I decided to use the strap hole for hanging my camera bag, augmented by a carabiner for extra robustness. 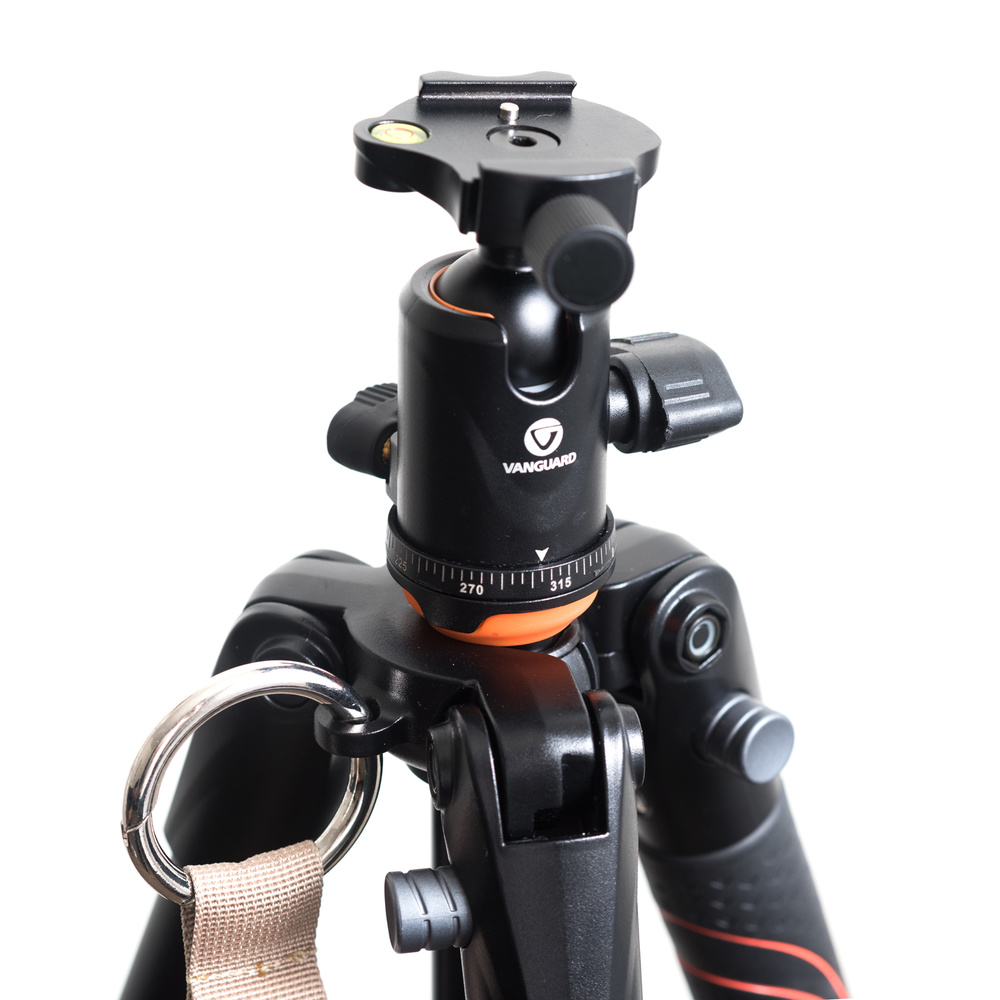 You can attach a carabiner to the strap hole on the tripod's body for hanging your bag or extra weight. 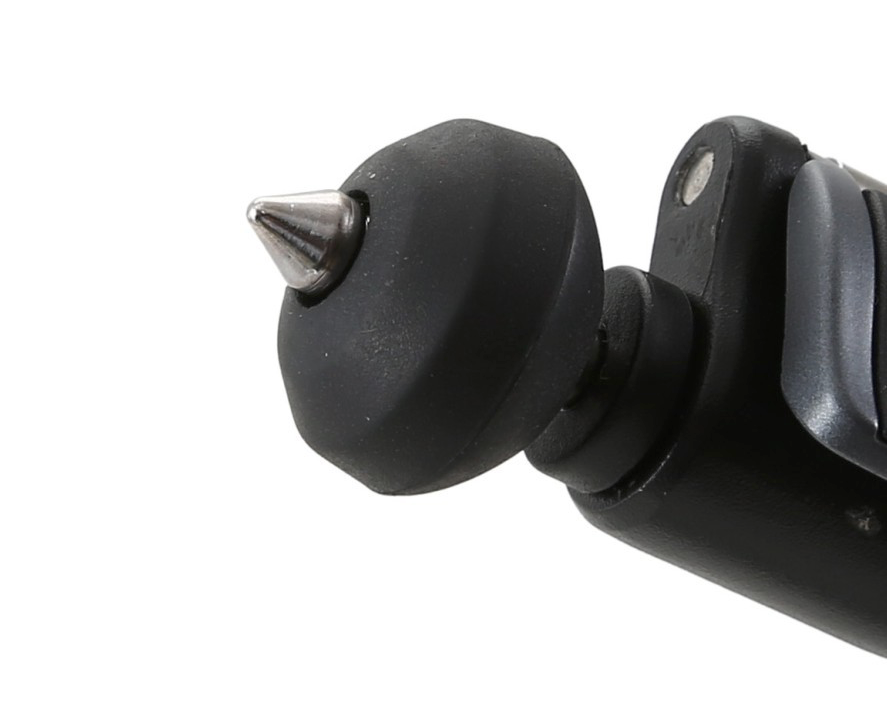 Rubber feet can be converted to spiky feet by rotation.

I decided to shoot a long-exposure nightscape at Docklands, Melbourne with a heavy DSLR and lens duo to test the limits of this compact tripod. I used a Nikon D810 and Tamron 24-70 f/2.8 DI VC USD, and considering the total weight and completely extended legs, it really worked well, and the details were pin sharp. The weight of the camera and the lens were adequate for extra stabilization, but it'd be better to hang a bag or extra weight when shooting on a breezy night. 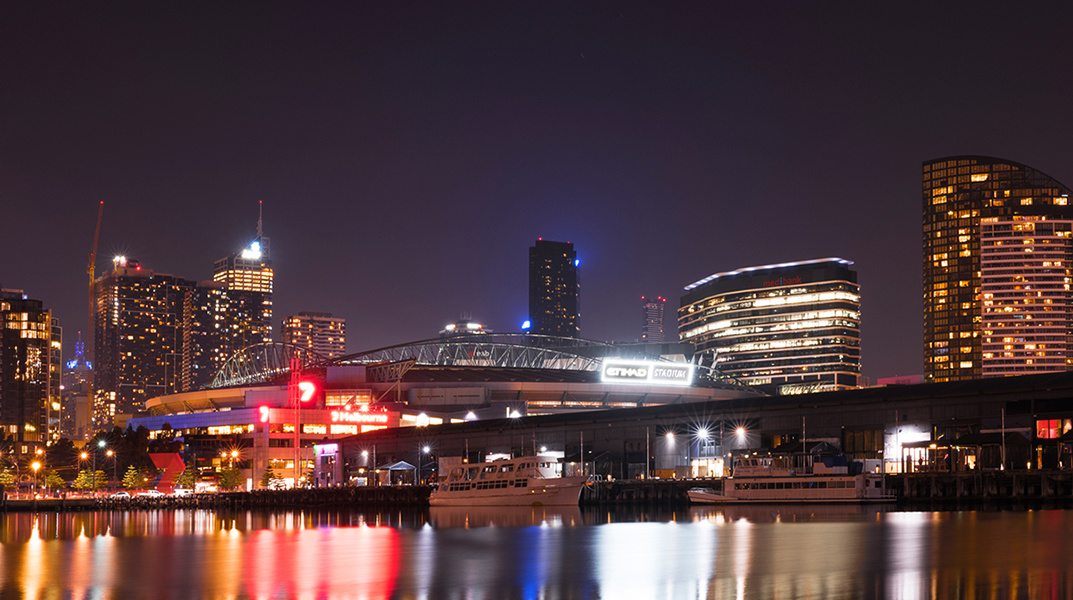 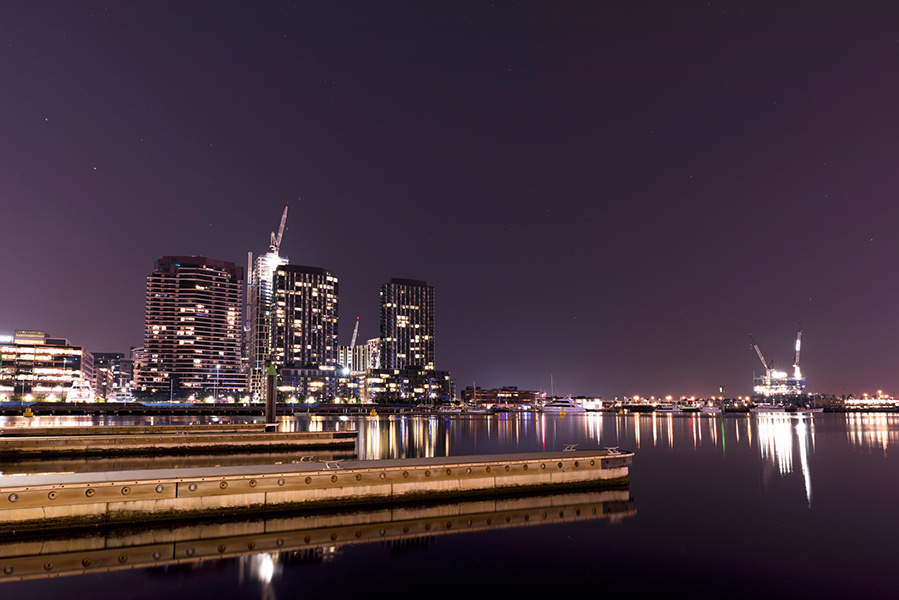 All models mentioned above are not the perfect tripods for professional nature photographers. There are better options in the market for using in challenging situations, but these are compact tripods for photographers who need a lightweight and functional carry-around tripod. In my opinion, the Vanguard Veo 265AB is the best choice in terms of build quality and price. Besides, it can even be used for professional shoots without hesitation.

I used to live in the buildings right behind where these photos were taken. Thats kinda neat

Is there any reason that Sirui was left off the list? They make outstanding tripods at decent prices. I've been using them for a few years now after trying out some of these other brands Sirui is definitely my favorite. I know there are a few other highly underrated and lesser known brands and I am always bummed to see them left out.

The Vanguard does look very nice, however. I haven't read much into that model but will have to consider it down the road. Thanks for the write up!

Well, I heard a lot about Sirui honestly, but as it were quiet similar to Mefoto, Benro etc, I didn't add, but I'll search about it too,

Although the center colum design sacrifice a bit in stibility, I really like the innovative design. What I don't like about it is it is also the heaviest of all three you listed. And the leg clip locks are poorly made, the built quality of the leg lock clip does not match the rest of the tripod. My Manfrotto 055 is one of the earliest model, back then they were silver instead of black, I used it for over 20 years and it is still good. Tripod is one thing I would invest $$ into. I work in camera store and seen many people break their camera with bad tripod. May it be user error or actually equipment failure. Don't waste $250 on a cheap traveller tripod if you have any camera system worth over $2000. For about $300ish, go big for a aluminum manfrotto 190 or 055 if you don't wana blow big bucks on tripod. Or just get a gorilla pod if you want to pack light. If you own a Gitzo or LFM traveller tripod, you'll know all those under $300 traveller tripod are crap.

I'm not sure if you've read the post but I stated that I already had a Manfrotto 055ProbX model :) Well, if I were a full time pro nature photographer, then I'd definitely go on with another brand such as Gitzo or Really Good Stuff or FLM etc. I'll disagree with the "crap" thing, do not judge products depending on the money. I used lots of expensive craps, believe me. Sometimes you only pay for the marketing expenses of the product, rather than the real value of the product. That's why I called this tripod "underrated"
One last thing; again as I wrote already on my post, this is not the heaviest tripod :)

Thanks for the review. I'm using my Gitzo series 1 1542t right now to shoot the Mercury transit with a 70-200 and a 2x tc. It has been excellent and even works well with a heavy setup like this one. I got mine fir $450 with a head on a christmas discount and rebate. I really enjoy the light weight 1 kg as i take it backpacking frequently. The cost is higher but the quality is second to none so i'll never look back.

@Burak Erzincanli may be crap is a strong word. As I also point out. I won't trust cheap tripod if I have expensive system like your D810 and lens which cost over $4k. But if I use an entry level camera and kit lens, sure, they'll work fine. But Chris Zeller point out excellent what I meant. If you're patient enough you can pick up good stuff for not too much more $. Like I say, the vangard design have its own good thing, but I'm just pointing out the weakness and hope vanguard would improve it when they update it a few years from how.

I used to tripod on my trip down to Puerto Rico. I had a big ol Hasselblad 500cm with pretty hefty lenses attached and it worked well enough. Some of my exposure were upwards of 6 seconds and came out plenty sharp. 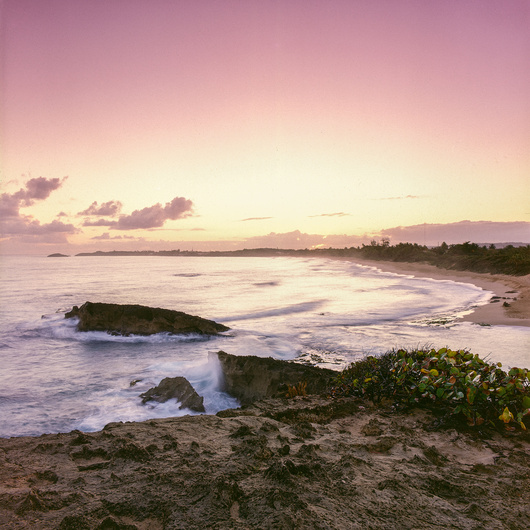 it's a nice photo Jared :) If I had a medium format, I'd definitely use with that as well without any hesitation

Why was the Mefoto Roadtrip considered as a mirrorless tripod? The Roadtrip has the same weight limit of 17.6 Lb as the Veo.

I really don't know, but all the salesmen at camera stores and online reviewers say the same...

My first tripod was a Japanese made Velbon, and soon I bought the second one at 1987, it still working fine even with the huge 200-400mm f/4 lens, it is a Gitzo #2 with Foba mini ball head, I think it will last as long as my life, I can pass it to my son and grandson without any problems, spend what you can afford.

As a matter of interest here in the UK I purchased a
XCSOURCE Q-666C Professional Photography Carbon Fiber Travel Tripod Monopod Kit & Ball Head from Amazon... weighs in at 1.32KG and cost £85GBP (or $139USD I checked on Amazon.com this morning)... I noticed that a photographer I know had left a review over a year ago and so I called him up... he advised he was using his D810 with 70-210 the day before and a year on he was still pleased. I am more than happy with my purchase... it comes well packed and with a hex key to loosen or tighten joints as required... My first long exposure with the tripod using a Fuji X-Pro1 with 18mm, Tiffen Apex XLE 10 stop. PS the upload seems to have been reduced in clarity as I've just checked my original file which is tack sharp... 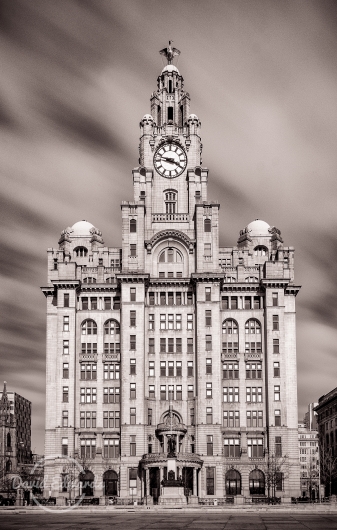