A Hands-on Look at the SIRUI 75mm f/1.8 Anamorphic Lens

There is a cult following of anamorphic lenses, but there is also a lot of people who enjoy the aesthetic without knowing exactly what causes those wild flares and oval bokeh. Here's a look at the newest addition from SIRUI.

SIRUI has become somewhat famous over the last few years. Despite their large collection of tripods, it is their small selection of affordable anamorphic lenses that has captured the interest of many photographers and videographers. Anamorphic lenses are typically seen in cinema setups, with their easily identifiable, extra-wide aspect ratio and unique characteristics. As is often the case with items you only see in cinema, they have traditionally been expensive — very expensive. SIRUI appears to have identified that niche and aimed to capture its hungry occupants.

SIRUI has three already released anamorphic lenses, their 24mm f/2.8 1.33x, 35mm f/1.8 1.33x (MFT only), and their 50mm f/1.8 1.33x. They have been very well received and despite calls for something even wider than 24mm, SIRUI is launching a 75mm f/1.8 1.33x as their fourth anamorphic lens. This focal length, in combination with its excellent widest aperture, grants a rather special look. I was also pleased to see that even though these lenses are aimed at crop and MFT sensors, the 75mm appears perfectly usable on full frame by simply cropping in a little, or even correcting the vignette.

Anamorphic on a Budget is a great YouTube channel for anyone interested in anamorphic but doesn't have movie studio budgets; I suggest you give them a follow! 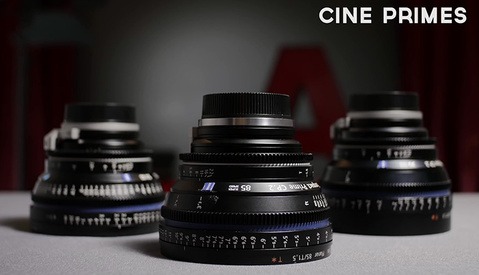 BTS / May 25, 2015
All About Cinema Prime Lenses for Filmmaking in the Latest "Gear Dictionary" Video