Nikon has unveiled its latest Z-mount camera: the Z fc, an APS-C camera that leans heavily into Nikon’s history, offering chunky dials and a tactile shooting experience — all for less than a grand.

With Olympus and Fujifilm having proven the appeal of mirrorless cameras featuring old-school control dials, Nikon has drawn on its heritage and produced a body that is wonderfully similar to the classic Nikon FE film camera released back in 1978.

The camera features a 20.9-megapixel APS-C (“DX-Format” in Nikon-speak) sensor, the EXPEED 6 image processor, offers up to 4K video, and is capable of shooting at up to 11 frames per second.

Notably, the camera also features a fully articulating screen and will take power via the USB-C — useful for vlogging and live streaming.

Nikon claims that the Z fc offers “cutting-edge performance” paired with “timeless design” and this is certainly a beautiful camera that appears to combine an intelligent mixture of classic dials and modern scroll wheels. The Z fc features “satisfying analog controls and craftsmanship that’s both unique and functional,” says Nikon. 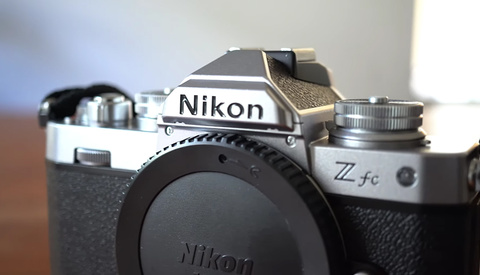 Oh wow. I really like it. Hope it does well and a full frame zf is on the way

I will not, not right now anyway; I like it though; I wouldn't mind one modified for IR. It sounds like it might do really well reading other responses around the webs.

Really a beauty. I think it can attract new customers to photography and current Nikon shooters as a second body. Great job, Nikon!

I pre-ordered one with 28mm lens.
It will replace my D800 on the occasional 3 camera shoots until I can justify a Z9.
The 28mm can be used on my Z6 and I won't miss IBIS since it will be on a tripod.
I almost went with the Z5, but the flip out screen is useful and the looks are sexy.

Not the first entry in retro inspired digital cameras for Nikon. Back in 2013, they released the Df. It was a good camera but it never was as popular as some of their other full frame options. There was some design and basic ergonomic issues with the Df that I hope they fixed with this new camera.

Yes I know of that camera and my comment was meant to say re-enter, although in this case they are just entering it either way.

Wooow cool. I think i'll eventually pick one up. That price is right.

A bad remix of a classic. FOR GOODNESS SAKE WHATS NEXT? Pentax with a mirrorless k1000.

Looks more like a big plastic-alu body (not really defineable) than a dense and compact full alu/steel/magnesium. That's probably why it does cost less than a thousand bucks. It does look vintage from far away, but plastiky with the lens on. It definitely is too big!