Our New Favorite Tripod Is Actually the Most Affordable We Tested

Normally, you get what you pay for. If you try to buy something that is less than half the price of its competitors, it's going to be bad. This is certainly what we expected when we compared four of the most popular carbon fiber tripods, but I'm shocked and excited to tell you we actually liked the most affordable model we tried the best.

Our tripod of choice for years has been the Manfrotto 055xproB. It was built like a tank, it easily fit in our checked luggage, and at around $250, it was very affordable. I could have been happy using this tripod exclusively for the rest of my career, but Manfrotto replaced this tripod with the worst tripod we have ever used. This tripod was literally falling apart just a few days into filming "Photographing The World 1."

We recently left to film Photographing The World 3 and we got B&H to send us four similar carbon fiber tripods from Really Right Stuff, Gitzo, Induro, and Benro. Throughout this season of "Photographing The World 3 Behind The Scenes," you'll be able to watch us use and compare all of them, but the bottom line is that the cheapest tripod, the Benro Mach3 TMA38CL, was our favorite. We didn't think it was the best because it was the best value. Both Patrick and I agreed that if all of the tripods were the exact same price, we each would have chosen the Benro TMA38CL as our favorite.

You're probably wondering how this could be possible, and we were also shocked. We both expected the $1,000 RRS tripod to be our favorite, and don't get me wrong, it was a great tripod. But it was the little things that you would only notice after using the tripods back to back day after day that really help you choose a favorite. We love the Benro tripod for a few reasons, but the first thing that you will notice when you pick it up is the overall build quality. Every aspect of it is solid, smooth, and secure. Nothing rattles or squeaks, and when you first open the legs they move, in a smooth and controlled way. The screw locks on the legs feel amazing, and when they are loose, the legs are capable of sliding freely on their own (although not as freely as a heavy metal leg). None of the other carbon fiber tripods that we tested worked as smoothly. With some of our old tripods, it seemed like we were losing feet on a weekly basis; the threads on these feet are coated with a clear oil that holds them securely in place but still allows them to be swapped out for the included spiked feet when you need them.

At just 4.3 pounds, this is much lighter than our previous tripod, and when it's collapsed, it's actually smaller. And when it's fully extended, it's almost the exact same height at 69 inches.

As for negatives, It would have been nice if the center column could become a lateral arm like our old Manfrotto. We do occasionally like to shoot straight down. The screw locks on the legs were our favorite to use. They were smooth, and with a short turn, they could fully lock and unlock the legs. That being said, if you are used to a old school flip lever lock, the screw locks may take some getting used to. While we were filming "Photographing The World 3," we met up with a few photographers who didn't have the best things to say about older Benro tripods, but after seeing ours, they were impressed. This is the first Benro product I have ever used, and this leads me to believe that Benro has really stepped things up with the new Mach 3 series. So, you may want to see this new line of gear in person before you completely write it off. We've only had ours for a few months now, so we can't comment on the ruggedness of these tripods over years of abuse, but after months of use, we haven't had a single problem or even a loose screw. If we ever do start to have issues with them, we will certainly update all of you.

For years, we resisted moving to carbon fiber simply because they were too expensive and I knew we would destroy them anyway. Even though this was our favorite tripod that we have ever used, if it cost $1,000, we wouldn't have bought it. That's just too much when we consider that we need at least five and when you consider how we treat them. But for just $410, it was an easy decision to swap out our old Manfrotto tripod with five new Benro TMA38CL Mach3 tripods. We will still be holding on to our old Manfrotto tripods, but from now on, we will only use them when we have a shoot at the beach.

You can purchase the Benro TMA38CL Mach3 here.

I'm curious why you're afraid to put your pods in the ocean? It's a pretty common thing for me. Just hose it off, and occasionally take the legs apart and rinse out the sand. That's the beauty of the twist lock legs. They simple unscrew to come apart for cleaning. So much easier than lever lock legs. 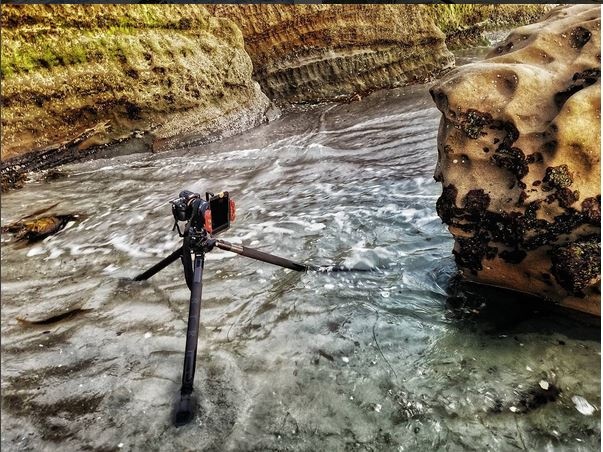 I look forward to trying to clean the these new tripods when they finally get sandy. Hopefully, because they are carbon, they won't corrode like our old Manfrottos.

Salt water corrodes anything. It will find a way. I have one of these for surfing, its cheap and sprays water, folds down to nothing when not full. Perfect for the ocean.

l looked at that one, but on a camping trip with a buddy that had one it was only 2 gallons, never shrunk down to small size after use, and needed pressure to fill it up.

I hate to sound like a spokes person, but at 6 gallons and the ability to fill it up at a drinking fountain or any water source and pump even the last drop to high pressure, hang on your roof to warm in the sun for temperature adjustment and stow away smaller than a hat when empty the Nemo is the jam.

I have showered my dog and myself maybe 6-10 times total after beach days on 1 fill up.

Yea, I'm looking to see how it stands up to your Manfrotto abuse.

I use the Benro A2573F tripod. It is a little heavy for me, but very stable. The S6 head is great for video, but I did not realize that you could not turn portrait (my error for not noticing). Any work around for taking portrait oriented photos with such a tripod?

Can't you just put a L bracket on? Granted you would have to have 2 plates and then keep attaching and detaching instead of just turning the head like you would on a different head, but it could still be done I think

I started out with a Benro and still use it from time to time. They are great. Needed something bigger so I bought a Feisol, damn thing is great! Half the cost of a similar RRS.

Yes, I just have the one head at this time.

"Manfrotto replaced this tripod with the worst tripod we have ever used." I have to agree. The cotter washer to secure the center column they use is horrible. I do not know how many times the center section would break free sending parts all over the place.

We must not have kept ours long enough to have dealt with THAT specific problem.

Lee, did B&H not give you any of the 3 Legged Thing tripods to test? I've yet to try one, but have heard nothing but good things. Their Leo carbon fibre sticks are only $225, weigh 3lb and can support over 60lb.

For what it's worth, I don't think 3LT can really stand up to the abuse of travel and location photography. I owned one that started to fall apart on me after say 7-8 flights and just as many days of hiking/shooting. I am curious about the Benro though. After my Manfrotto fell apart, and then my 3LT fell apart, I just bit the bullet and bought a RRS which has been rock solid for a couple years now. No complaints at all, other than the fact that it's absolutely massive!

That's interesting Mike, thanks for that. The cost and specs of these seem really really compelling, but I suppose there's always a price to pay.

I have not yet tried one

The owner of 3LT emailed us right before we went out on the road for Photographing the World and we were supposed to test them as well. I'm not sure what happened but we never received anything from them.

Oh ya... I remember you telling me about this. I wonder what happened.

I wonder how well the Benro will last compared to other "name brand" tripods...
Although I guess if it lasts half as long it is still a decent investment...

I have used this tripod for a couple of years with a Benro carbon fiber gimble. It's a great combo.

I don't know much about Benro but didn't this tripod recently come out?

I checked my Benro. It is a Mach 3 TMA38C. It looks just like the TMA38CL. I'm not sure what the difference is.It has been a realy good tripod for me.

For those who are shooting video, there is a new type of tripod on the market the Flowtech 75 from Sachtler-Vinten. It features an ultra-quick-release (i.e. one latch only for each leg) and seems quite promising to use if it's able to stand the test of travel and time.
Maybe worth checking out.
http://www.4kshooters.net/2017/09/06/new-sachtlervinten-flowtech-75-the-...

I also put one of those freebie aluminum tripods in salt water and it stopped working within hours. This is how I ended up with carbon fiber tripods.

That would be awesome. I can't stand sand in my metal tripods... and all but one of them have sand throughout.

Lee, you mentioned in the video that the Benro came with a tool kit. I own an older Gitzo GT3541LS Carbon Fiber tripod that I love but some of the screws have started to wear out/rust a bit since I have been negligent in my cleanings. Gitzo did not put a kit in with this tripod and I was wondering if you (or other FStoppers) knew of any such kits or replacement parts I could look into for replacing the screws on each column?

If you’re in the US you might want to give the official Manfrotto importer (www.manfrotto.us) a try as Gitzo is now a Manfrotto brand; fortunately with little side effects on the tripods‘ build and quality so far.

In Europe I‘d recommend www.gitzospares.com. They are in the UK and have plenty of stock also for older models. Bought from them several times for my Gitzos, service and shipping times are top notch.

I'm in the US Thomas, I will take a look at the manfrotto.us thanks!

They should be pretty standard screws, only difference I see is a few of them have gitzo engraved on them. May take them to home depot or something if the manfrotto site doesn't pan out.