Just announced by Sigma is the newest in their covenant Art series of lenses with the 24mm f/1.4 DG HSM Art. In the past couple years now, the Sigma Art lenses have been considered by many the best in their class in terms of sharpness, so the news of a 24mm Art has gotten photographers everywhere excited. Along with this announcement is the dp0, an update to their mirrorless camera systems.

The Sigma Art lens has impressed us in the past, to say the least. Infact, nearly every review of the Art series of lenses (particularly the fixed lenses) has placed them on top of their competitors in terms of sharpness and color reproduction. With the newest 24mm Art, Sigma hopes to create a new standard for the 24mm lenses on the market.

Announced today at midnight is the Sigma 24mm f/1.4 Art series lens. With 15 glass elements in 11 groups, Sigma promises a lens with little to no chromatic aberration with the use of Low Dispersion glass. As expected from the other lenses in the Art series, Sigma also plans to take the crown for the sharpest 24mm lens available for both Canon, Nikon, and Sigma shooters. No info yet in terms of the price or availibility, but Sigma should have more info on this lens soon.

The dp0, latest in the mirrorless line, incorporates a 14mm f/4 fixed lens used to maximize the performance of the specialized Foveon “Quattro” Direct Image sensor. This unique camera is small, lightweight and certainly interesting to those who are looking for something other than your traditional DSLR systems. Like the 24mm f/1.4 Art, no news yet on availibility or price. 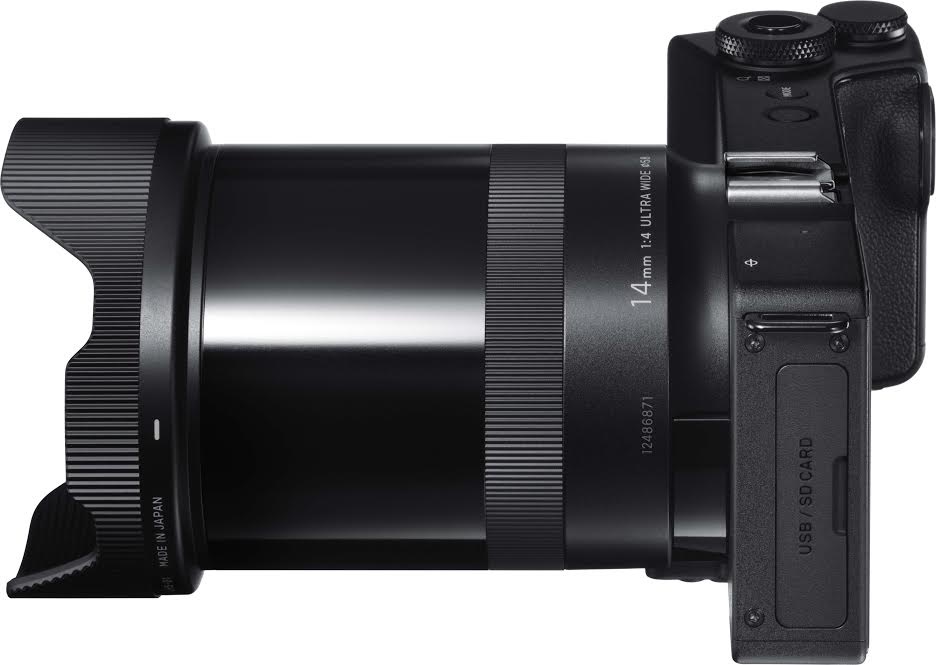 YOKOHAMA, Japan — February 10, 2015 – Sigma Corporation of America, a leading researcher, developer, manufacturer and service provider of some of the world's most impressive lines of lenses, cameras and flashes, today announced the new Sigma 24mm F1.4 DG HSM Art lens, the ninth Global Vision lens to join the company’s iconic Art line-up. The announcement comes at the start of the CP+ Camera and Photo Imaging Show 2015, which begins on Feb. 12 in Yokohama, Japan.

The much anticipated 24mm F1.4 Art wide angle lens is designed for full-frame DSLRs, and when used on digital cameras with an APS-C size image sensor, it effectively becomes a 38mm. The lens is ideal for capturing a variety of photography subjects, including cityscapes, mountain ranges, astrophotography and weddings and is great for videography work as well. The 24mm also excels at indoor photography in low illumination thanks to the combination of exceptional focal plane sharpness, and gorgeous bokeh rendered by nine rounded aperture blades. The lens achieves a maximum magnification of 1:5.3 with a minimum focusing distance of 9.8 inches. The 24mm incorporates both "F" Low Dispersion (FLD) glass and Special Low Dispersion (SLD) glass in a design of 15 elements in 11 groups to minimize chromatic aberration of magnification especially in the edge of the image field. Moreover, the optimized power layout includes aspherical elements that are positioned in the rear of the lens for improved wide open performance. This helps to ensure minimal distortion through the correction of axial chromatic aberration and sagittal coma flare. The new lens element design also delivers excellent peripheral brightness.

“The Sigma Art lenses are recognized by photographers for world-class performance, and the new 24mm F1.4 DG HSM will be a significant contribution to our selection of fast aperture prime lenses which is quickly becoming a strong force in the industry” said Mark Amir-Hamzeh, president of Sigma Corporation of America. “Sigma is redefining the expectations of fast-aperture full-frame prime lens performance, especially wide-open, and the results the 24mm F1.4 will deliver will be up to the exacting standards set by the 35mm F1.4 DG HSM and 50mm F1.4 DG HSM .”

Other updates to this lens include a new full-time manual focusing mechanism that switches to manual focusing, simply by rotating the focus ring, even when AF is being used, first introduced on the 50mm Art. This allows the photographer to make focus adjustments quickly and easily. As with all new lenses under the Global Vision categories, every 24mm will be tested using Sigma’s own MTF measuring system, “A1,” in the company’s factory in Japan.

The 24mm F1.4 is compatible with Sigma’s USB dock, allowing photographers to update the lens’ firmware and change focus parameters as well as manual focus over-ride using Sigma's Optimization Pro software. It is also compatible with Sigma’s Mount Conversion Service. The lens will be available in Canon, Nikon and Sigma mounts, and timing, pricing and availability will be announced at a later date.

YOKOHAMA, Japan — February 10, 2015 – Sigma Corporation of America, a leading researcher, developer, manufacturer and service provider of some of the world's most impressive lines of lenses, cameras and flashes, today announced the new Sigma dp0 Quattro, the fourth compact camera in the series that was announced last year. The news comes at the start of the CP+ Camera and Photo Imaging Show 2015, which begins on Feb. 12 in Yokohama, Japan.

The dp0 Quattro incorporates a fixed, high performance 14mm F4 lens, which is equivalent to a 21mm lens on a 35mm DSLR and is optimized to maximize the performance of the series’ Foveon “Quattro” Direct Image sensor. The Quattro line is great for photographers seeking a unique product, and the 14mm F4 lens is meant to take full advantage of the Foveon sensor.

“The Quattro series is such an unique line of cameras and we couldn’t be more thrilled to add the dp0 Quattro camera to the line-up,” said Mark Amir-Hamzeh, president of Sigma Corporation of America. “It’s this wide angle lens combined with the high resolution sensor, that makes this perfect for architectural and landscape photographers, and something the dp fans can be excited for.”

In order to achieve the highest optical performance, the dp0 lens features four “F” Low Dispersion (FLD) glass elements, which have performance equal to fluorite, two Special Low Dispersion (SLD) glass elements, and two aspheric lenses, including a wide double-sided aspheric lens. This reduces chromatic aberration and distortion, which are characteristics typically present in super wide angle photography. The camera offers sharp rendering performance from the maximum aperture, and the superior telecentric optical design improves image quality throughout the frame and maximizes the sensor’s ability by passing on information about subjects to the sensor. In addition, the wide angle of view of 91 degrees and depth of field are ideal for architectural structures, interior photography and landscapes. With this powerful lens and sensor, numerous glass elements to reduce distortion, and a 91 degree angle of view, this lens is ideal for landscape and architecture photography.

As with all the cameras in the Quattro series, the dp0 Quattro features the distinctive styling of the line. The Quattro sensor is the equivalent of a 39 MP conventional Bayer sensor in resolution testing. The next generation sensor builds on the distinctive properties of the X3 technology, which uniquely records red, green and blue wavelengths at each pixel location within three layers.

The Quattro sensor is a three-layered, panchromatic silicon chip whose green-sensitive middle and red-sensitive bottom layers each have 4.9 MP and record only color/chrominance information. The top blue layer captures chrominance and resolution/luminance information with 19.6 MP, resulting in greater detail capture and resolution capabilities that are higher than the Merrill DP camera line. The Quattro sensor’s architecture also contributes to true color rendition, more detail capture, and faster image processing, all of which delivers even more realistic images.

·         The TRUE III Image processor, providing ultrafast processing of an immense volume of image data without any deterioration of the final image

·         Better high ISO performance with one to two stops of improvement 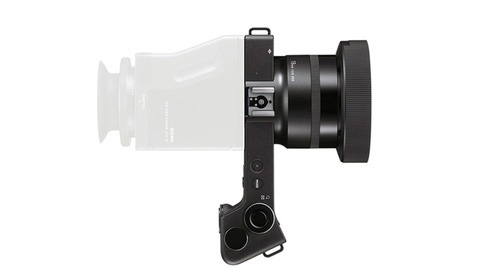 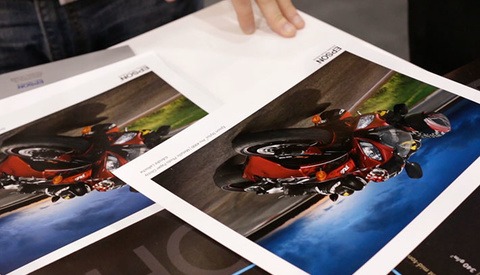 The Hero Shot How To Light And Composite Product Photography
With Brian Rodgers Jr.
$299.99
Log in or register to post comments
21 Comments

Let's hope this lives up to the ART line, and so far we haven't a reason why not. Hopefully the ART line will also stick around the $1000 mark as well.

However I don't get how a company that produces such great lenses can make such miserable cameras...

clearly they focus on lenses more than their own cameras, more money in my opinion in glass

Seems true as they haven't refreshed there DSLR line up in a while but camera wise they have developed a new sensor for the DPQ's and I tend to use my DP's more than my DSLR due to the crazy IQ and leaf shutter to control ambient light more when using strobes (no need for HSS).

The dp0 sounds pretty exciting and it seems they went all out for IQ on the glass inside it instead of compactness (considering it is a small camera body), pentax's 15mm f4 is pretty small looking compared to the lens on the dp0.

come on! Sigma ART 85mm instead!

The 85mm Art is more important and demanded than the 24mm Art. They need to get on it or they shall lose sales.

they will not lose sales, ART is selling because its sharper than 1st party lenses like Nikon and Canon AND cost about less or equal to the 1st party lenses. They are going with the apple route it looks like... creating buzz and intense market need for their products so keeping the very, very popular lenses to dead last if necessary to create that hype.

Someone missed the point of my post. Let me put it this way, if an 85 Art is not released or at least announced within the next two months Sigma WILL be losing at least one sale, because I will take my money elsewhere and NOT buy the Sigma later when they finally release it YEARS late because I already will have an 85 lens.

Ohhh no... i can feel the money on my pockets screaming for this lens...i was looking for a wide angle prime, fast one..and this baby is just the thing...

I want the 135mm Art. Hoping that's next. While I like the sound of this lens I'm 24mm poor with so many already in the arsenal.

Oooooh yes, I was waiting for this lens since the first rumors came out.
And..no. Sigma did not have a fast and good 24mm in their line-up, but they already have a pretty good 85mm, so if we are talking about priorities..

Now, I just hope for the price to be similar to the 35mm one..

is Sigma keeping the more difficult and popular lenses last? like 85 1.4 ART?! or trying to intentionally create intense need from the market like apple does with iphones?

Here's the official comment from Sigma regarding the 85 1.4 ART...

Thanks for asking Sigma Chris. I was nearly certain that they were about to release the 85mm art...it's in HUGE demand by many. This is a shocker for me.

Just curious, can you post the email question you sent them?

I'm having a hard time finding it but it was basically asking them when is the 85 1.4 ART coming.