I Was Wrong. I Need To Apologize To Anyone I've Offended.

For a while I've wanted to pour out everything in my heart, but it's been bottled up. Out of fear, humiliation, and hurt. What I've encountered in the past few days is one of the hardest moments of my professional life, but I need to address this face-forward.

There are truth and lies swarming the internet and I need to take a moment to clear the air. But before I do that, I need to apologize to anyone I've offended. Knowing I've let people down is one of the hardest things to accept. Beyond all else, I've let myself down and the shame I feel is overwhelming.

Firstly, I need to address the most pressing matter at hand. For the past seven years I've blogged 1,500+ posts. I was passionate about creating a blog to share content I learned along the way. I placed an inordinate amount of pressure on myself to write and produce content every day. This {self-imposed} pressure led me to compromise my ethics and publish four blog posts using content I sourced from other blogs. I absolutely should have cited the sources, but didn't. I was wrong. I totally admit this is my fault and I'm humiliated by my actions.

The posts (three posts written in 2012 and one in 2013) were removed, I contacted the publishers of each blog, and I apologized. I offered to make amends any way I could and, thankfully, they responded gracefully.

Since then, a petition has started to remove my name from a list of speakers at WPPI. The petition is unnecessary because I've removed myself from the speaker list. This was a difficult decision to make, but I love this industry too much to see a group of people use my flaws to polarize photographers. 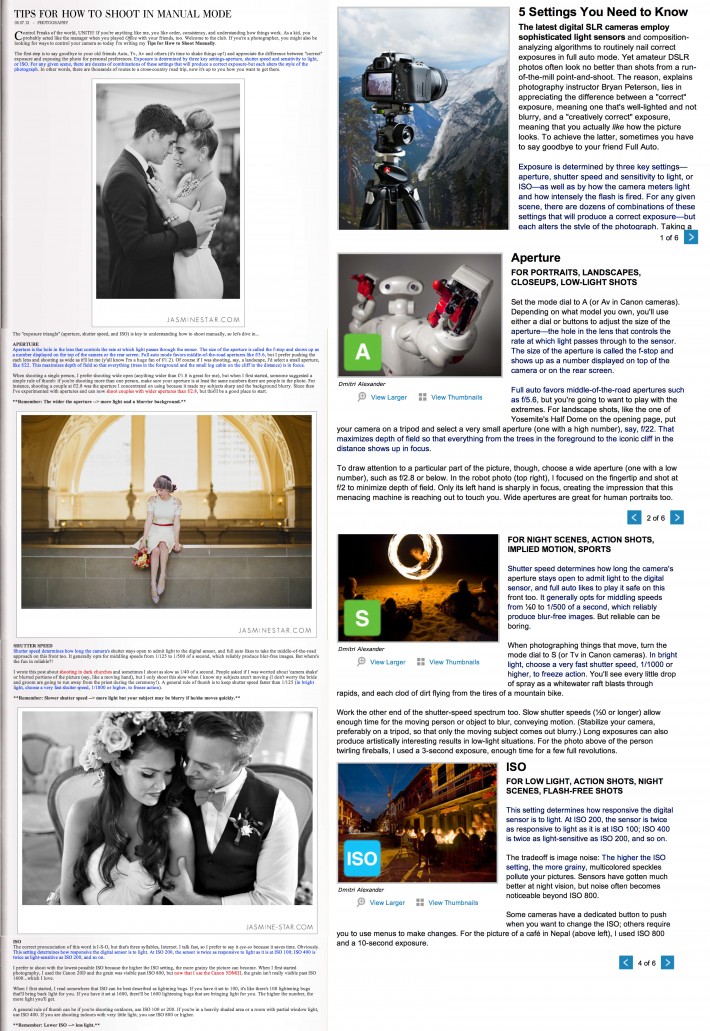 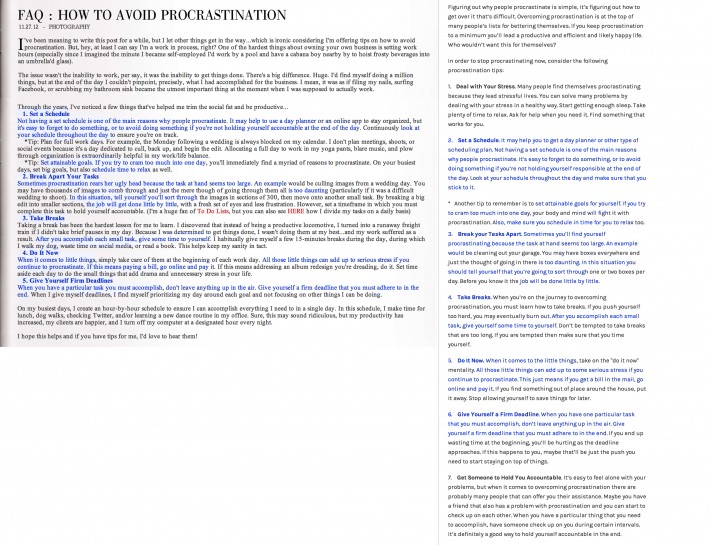 Secondly, those accusing me of stealing a photo to promote a workshop are wrong. I've never used someone else's photo as my own. In 2010, I was invited to speak at a workshop (hosted by a magazine and I was an invited guest) and they created marketing material on their own. The magazine used an image to promote the event. I spoke for free, gave of my time, and didn't have a say as to how the event would be promoted.

Thirdly, on August 16, 2013, I addressed and apologized for misleading my Twitter followers. You can read the entirety here: 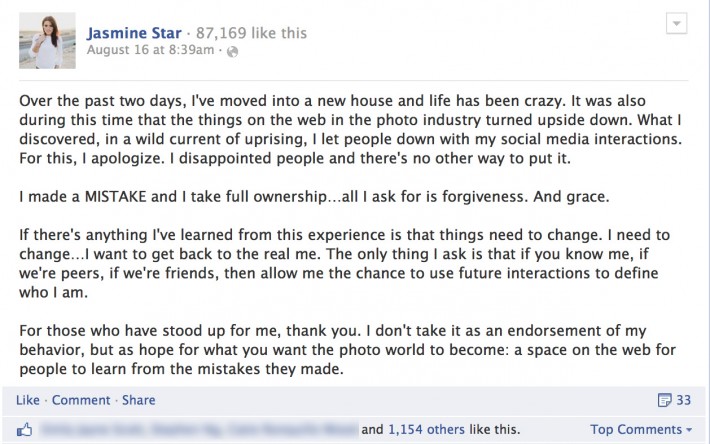 Lastly, for anyone who has accused me of using a fake name is wrong. I was born Jasmine Star Juarez, and later changed it to Jasmine Star DeLaTorre (my married name). I've never hidden this fact, and have chosen to use my first and middle name for business purposes.

I appreciate those who've stood by my side during this time. It's been a humiliating lesson, but those who have encouraged me to move forward are priceless and I appreciate it more than I can express. My actions are entirely my own and I accept full culpability. These explanations aren't suppose to justify my actions, but merely commit to making better decisions and bring full disclosure to the situation. Again, my sincerest apologies.

and what about throwing people out of her online community forum for speaking about it? I think she's only apologising because she feels forced to, nothing sincere about it nor her period

YOU ARE A SAD LITTLE HATER : (

So she was insincere about her period?

Good enough for me....time to move on and stop the witch hunt.

I am in agreement with him

This resumes it all
http://www.youtube.com/watch?v=dPtH2KPuQbs

Would you if she stole from you?

Did she steal from you?

She has stolen from all of us ... would you trust a photographer if you thought they were all willing to steal from each other?

I have a hard time understanding this too

which came first, the petition or the withdrawl from WPPI? and does it really matter? but she tries to spin it like she made the decision before the petition, which I don't think is the case. without that petition, would she still be on the list? Sounds like Jason Groupp gave her graceful "we'll let you 'decide,'" and that was very nice of him. I get it. She wants to save some face after being outed as a copycat/thief. Who wouldn't? But the defiance &amp; spin about WPPI left a sour taste.

The petition came first, then the discussion within WPPI, where thy decided to give both J* and Doug Gordon a chance to withdraw rather than be dismissed from the list of speakers. Both took the 'out'. Can you blame them? Imagine the Q&amp;A they would have to be subjected to at WPPI, lol

I was not directly responsible for the petition, however the person who did start it reached out to me because they knew about my strong feelings on this. Both he and I had reached out (separately) to WPPI because we felt that it was not appropriate for Star and Gordon to be speaking in Las Vegas due to their misdeeds. The response that he received was something along the lines that because Star and Gordon were so popular with so many people, upper management was not willing to pull the plug on their talk.

The only way to convince WPPI otherwise would be if enough photographers banded together to voice their disapproval. If the outcry grew big enough, then WPPI would have to reconsider. My suggestion was that an online petition be started. To that point, there was no sign that Star would not be speaking.

I think that once the petition began to gain traction, then Jason from WPPI reached out to Star to let her know that her ship was taking on heavy water. With the writing on the wall, she abandoned the WPPI ship. This is just my reading of the situation; I have no firsthand knowledge however.

At any rate, I think she made the correct decision to not speak at WPPI. I'm grateful that she apologized. Though the breach of trust and the shaming will take awhile for her/us to recover from, I'm of the mind that what's done is done and we can now move on.

Doug Gordon on the other hand, is unrepentant. His case is still open. Until he comes clean, I don't think he should be welcomed back to public speaking.

I was already behind her after the first apology. She made a mistake, acknowledged it, let's move on. Who here hasn't made a mistake?

She only made the mistake once this year. I think you're confused. Besides, let it go.

She only apologized because she got cause. End of!

My only question is: How much her lawyers will beat to death if someone did the same thing with her "fabulous" posts, images, etc, etc. Ow yeah ... they probably will put out this person from the market/industry taking all his/her actual and future assets.
But all blinds followers will get the "I'm sooooooooooooooooory ... o/".
I'm shocked she didn't bring up AGAIN the mother's cancer story ...

There is no need to criticize a person based on hypothetical situations.

“How would your life be different if…You walked away from gossip and verbal defamation? Let today be the day…You speak only the good you know of other people and encourage others to do the same.”
― Steve Maraboli

My dad always told me that it's what counts after you make a mistake that will define the kind of person you are. Way to own it. Lets move one people.

Stealing other people's blog content once was a mistake. Doing it multiple times is beyond that.

Her thinking it was OK, or justifying it in her own mind, was the mistake and for that she's apologized, lost money, and lost reputation. You're acting like she made her living off stealing other people's work when it was 5 times out of 1500 and she's resolved it with the actual owners of the work. It was THEIR work and they're over it. What exactly do you want her to do to make this right?