Did Google Just Take The Lead in The Tablet Race?

Since the launch of the first iPad in 2010 Apple has dominated the tablet market. Quite a few companies have tried to contend with them but no one has been able to do it. This November, Google is launching it's new tablet, The Nexus 10, and Apple might finally face a contender that could land it some nasty blows.

The new Nexus 10 tablet, manufactured by Samsung, will have the world's highest resolution tablet display with a resolution of 2560x1600 and a pixel density of 300dpi (higher than Apple's latest 4th generation iPad.) The 10" super PLS screen claims to offer higher brightness and better viewing angles compared to other screens. In addition to the impressive screen, the Nexus also comes in thinner and lighter than the iPad. 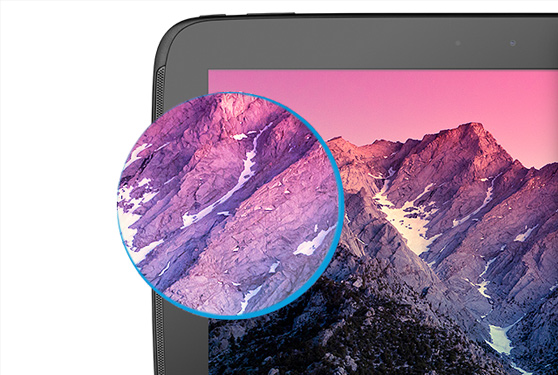 According to PC World Magazine, the tablet is powered by a 1.7GHz dual-core Exynos 5250 processor, has 2GB of RAM and will come in 16GB or 32GB variants. There's a quad-core Mali T604 GPU, too, so the device has been designed with games and other graphically intense apps in mind. If that is not enough Google also says the devices battery will last up to nice hours of video playback or 500 hours of standby time before needing a recharge. This beauty also includes a Micro USB and Micro HDMI ports which could open up lots of opportunities without using a proprietary connection.

For those who enjoy Google Hangouts, the tablet comes with a 1.9-megapixel front facing camera and a 5-megapixel camera for photos and video capture. The tablet will run an all new flavor of Jelly Bean, Android 4.2 and will include a new way using Google Accounts to sync all your data; photos, emails, contacts, bookmarks and more simply by signing into your account. Lastly, the tablet makes it easy to add multiple users and switch between them instantly at the lock screen. As Google explains, "that way everyone can have their own home screens, their own music, even their own high scores."

The Nexus 10 goes on sale Tuesday, November 13th in two different favors. The 16GB will go for $399 and the 32GB for $499. This device sounds pretty impressive and I look forward to getting my hands on one to give you a hands on review. If it lives up to how impressive it sounds I might just be replacing the iPads and Kindle in my house.

I think in a year they will be crushing iPad and Surface products!

Just look at what the Galaxy S3 and Note 2 are doing to iPhone's market share.

Apple overplayed their hands on this.

There are many android apps that allow you to read raw files. I've shot tethered to my oldschool Asus Transformer tablet and it had no problem reading raws from my 5DII

I predict this will be as useless as the iPad, but with only marginally less rabid adherents lying to themselves and others about how 'indispensable' it is to their lives.

Wow. You really can't allow yourself to believe that people are using new tools like this in revolutionary ways. Do you have any idea how many people have replaced laptops and projectors for business presentations and sales pitches with iPads? They travel lighter and end up with a more ideal arrangement for a personal discussion than they previously did in a conference room.

That's just one example of how indispensable these new tools have become to some people. Just because you don't understand it doesn't mean people are lying to themselves.

Yeah, it's because I don't "understand" it. The iPad is just so deep, so intellectually consuming that I simply cannot fathom it's brilliance.

It's beyond me in a way I'll never understand. I mean, fuck, they replaced laptops! This is some deep Socratic shit.

I'm just sitting here looking at this iPad, and totally not "getting" it. It's like a laptop without a keyboard that you touch. WHAT.THE.FUCK. It's plain sorcery.

Is there some kind of spiritual guru, shaman, or mystical Apple god I can do to to help me fathom this mysterious item?

But yeah, I kind of understand what you mean.. The iPad has replaced a bunch of tools that were already perfectly suited to the job, and in most cases, did the job better.

I mean, if I needed to project something on the wall, and my choice was an iPad, or, say, a projector, well, it's hard to know WHICH one I'd choose!

Such anger. Such insecurity. You might want to seriously consider talking through your issues with a professional. Good luck.

Maybe I should read some Epictetus, or one of the other great Stoic philosophers. Seneca perhaps? Then I could unravel the deep mysteries of the iPad at the same time as curing this deep insecurity that manifests itself as a criticism of a consumer product!

You've convinced me: you know and understand all. It's not you who doesn't "get it"; it's the Millions of satisfied tablet owners. Clearly anyone who can reference a relatively obscure philosopher understands all human philosophy and behavior. My mistake.

Please, teach us more, o Great One. We are ALL unworthy of Your presence; nevertheless we sit and patiently await another dispensation of Your wisdom, for we are hopelessly lost without it.

Thanks, it sucks preaching to a crowd of non-believers. Throw away your tablet and follow me; you can be saved.

Self-deception is not satisfaction; dust off your laptop and stop pretending you weren't doing everything far quicker and more efficiently when it was all you had.

My number's on my website-call me if you need a friend.

I own not a tablet; indeed my trusty notebook is my computer of choice. Your assumptions are entertaining, if not persuasive.

Yeah the hard ware sounds nice but lets not forget the software . Google's android software is terrible. I have an android phone and it freezes just by turning it on. The actions like doing the swipe motion on the touch screen is very sluggish at times ,apps sometimes don't close when I quit them. so remember people it's not just the hardware but the software.

I have a Android and have non of these problems. You need to trouble shoot your device. Perhaps a backup and restore to default settings. Better yet format and install. Nice and clean.

I have had these types of issues in the past, but I must say my Nexus 7 with Jelly Bean just isn't the same problematic beast that past versions of Android have been. It's very smooth and nice to use. In many ways I prefer it to my iPad, although the iPad is still the leader in overall experience for its end-to-end polish. This gap is largely closed now though.

The litmus test for me is a simple question: would I give one to my Mom. Until Jelly Bean, the answer was a simple 'no' but now I'm not so sure.

I accidentally "liked" this instead of hitting "reply" (butterfingerz).  I've used iProducts exclusively for the last 3-4 years, but used to have an Android device (HTC Incredible).  I loved that thing, and never experienced any lag issues.  Perhaps yours is defective? I think Patryk Molczan might have a good idea with troubleshooting it.

I just switched to Android via the HTC One X from the iPhone. iOS may be boring now, but compared to my experience, it's rock solid. It built into me a zero tolerance for odd behaviors that aren't solved in an obvious, immediate way, and that's what I've been dealing with. I'm happy with the phone for the most part, but if Google wants to start converting iPad users, they are going to have to tighten things up pretty neat.

As usual the Hardware is nice, but it's the software where Google leaves questions marks. Not to mention the lack of tablet optimized apps. Maybe this new Nexus 10 will help move them forward in this area...

I want a tablet with thunderbolt and reading raw... mmm... raw...

ive been thinking about getting an ipad for the longest. but now that this is coming out i settled for the itouch and will get the nexus for my photos. i wonder if it will have wifi photo viewing.

"battery will last up to nice hours of video playback"  I think you meant "nine" hours of video playback.  It's an awesome tablet.  I love android and the potential the future will bring.  At least Google tries new things and irons out bugs as it finds them.  Project Butter smoothed out Android a lot.  iOS is just as bad in regards to crashing and sluggishness.  I have both types of devices so I'm not being bias.  It all comes down to preference.  Try before you buy.

"At least Google tries new things and irons out bugs as it finds them." Not when it comes to Chrome!!!!!

On another note.....Why doesn't my monitor have this resolution yet?  We should have 4k computer monitors by now!!!!!!  Arrghh!  lol

Viewing distances are different.. a 30" eizo monitor would not need retina res to look great,and at this moment it would cost an obscene amount of cash...

In my opinion, the ASUS Slate not only contended but dominated the iPad, just not in the market. Full operating system, IPS screen and wacom pressure sensitivity. Everything you need to photoshop on the road. But this does look very very nice. I am an android fan on my phone but I think I'd feel a bit empty with a mobile OS for a tablet still.

And Chuck.. my monitor has this resolution. Cost as much as the rest of my computer though..

seriously. And I think that the potential CNOOC deal is bad too. Pretty sure that neither Samsung hires a lot of american / canadian photographers. Except for feel good shots of farmers hugging windmills in Ontario.

You made an ass of yourself all on your own. You should be proud!

het your story straight. Ipad products are made by Foxxcon in China.