Instagram has rolled out the option to publish the same content to different profiles simultaneously, allowing more flexibility to those running multiple accounts, and making it even easier for freebooters to share other people’s videos and images.

The feature gives you the option to choose multiple accounts when publishing from a mobile device. This will certainly make posting easier for users who publish similar content to different Instagram profiles, something that businesses and influencers will find useful. Freebooters will also relish the opportunity to post the exact same stolen photo or video across all of their copyright-plundering Instagram profiles. 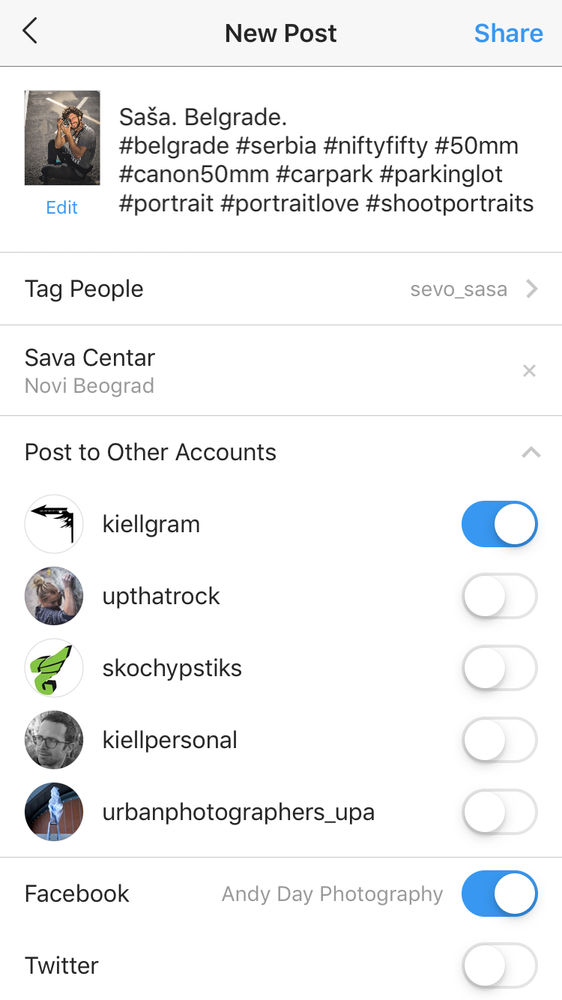 Instagram treads a careful path between happily allowing the theft of intellectual property and promoting original content. It doesn’t offer its own native "regram" function, but certainly doesn’t stand in the way of users who wish to take other people’s photographs and videos and share them illegally. Freebooters often run multiple, near-identical accounts, and these accounts are about to become even more similar. Having seen one of my photographs posted to six accounts all selling the same, awful rock climbing merchandise, you can be sure that the problem is only going to get worse.

As TechCrunch notes, this new feature also has the potential to dilute Instagram’s quality. In the past, the social media giant’s algorithm has always rewarded original content, whereas this new feature could make feeds more homogeneous.

It’s strange to see Instagram prioritizing this new feature when other parts of the app are still dysfunctional: users still have no means of counting the number of hashtags; likes and comments are all bundled into one relatively useless stream of notifications; and the app’s system for allowing carriage returns (i.e., a new line of text) within captions seems to change by the month. If you have other gripes about Instagram (other than chronological feed — that ship has sailed), please post them in the comments below.

Opinion / November 28, 2019
Why Is Instagram’s Explore Tab so Terrible?

I don't generally like them, but would watermarking photos cut down on this? Kind of takes the spontaneity out of it, I suppose.

I watermark all my images but there are still people using them; cropped or not.

Well, true. But I feel they rarely take time to search for the original.

I've found white borders (yes, I know a lot of people are doing them) helpful. If someone wants to recycle my image they will have to deal with the fact that my image will have a white border that won't look good next to images without one. Even if others also have a border, it's likely that they aren't using the same size as me and thus makes it more work to resize the image to fit. If they wan't to remove the border by cropping it out it will dramatically reduce the image quality.

It's not a perfect system but I've seen less unauthorized used of images and it makes my feed look a little more interesting IMO.

Interesting. I put white frame on my two accounts because the vertical image ratio of Instagram is irritating. I never thought it might deter "reposters". What I saw them do sometimes was check my website and get photos from there... If only they took that much effort in contacting me.

Maybe I'm just not very good at finding instances of my images being used on IG.

I really wish Instagram would release an iPad version. I tend to use my iPad Pro for a lot of my social media stuff (including sharing my photos), and using the iPhone version blown up on such a large screen (I've got the 12.9" version) is just so... inelegant.

They promised to delete spam and bots months ago, and I did not see any difference. How hard can it be to delete accounts that are bots? I can't believe it's more than just a couple of lines of code... Anyway, my new year resolution has been to stop being frustrated by Instagram, and focus on sharing high quality content (text+images) on my website.

I think IG has done a decent job of keeping spam and bots under better control than in the past. They will never be able to completely eliminate them but I definitely see less bot activity in my comments section, tags, and messages. They can't stop people from making bot and spam accounts but they can increase efforts to continually monitor profile activity and keep deleting them as they pop up. It's like a game of Whack-A-Mole.

Haha so maybe they sent them from your account to mine :-)) It was terrible, it got better for a few weeks, and now it's back like before. It's not hard to block accounts with 0 post, 0 follower, 0 following and no profile photo, is it? That would already filter a massive volume of fake accounts.

I think in the case of deleting accounts with low activity get's them too close to requiring users to have a certain level of activity which would open another can of worms. Personally I just ignore follows and engagement from bot/spam accounts because I always find that they go away eventually. I certainly feel the effect of IG's account purge strategies because I'll see my follower number drop by around 50-200 followers in a matter of minutes without having posted for a couple of days. Organic unfollows tend to come right after posting because people who would unfollow, forget that they're following you until you show up in their feed.

IG shouldn't be taken seriously unless it provides a significant level of income. I would assume at that point the profile is more of a public figure account than a photographer/creative portfolio account and would be kind of irrelevant to Fstoppers.

50-200 drop per day is massive... but it depends of course on your total (couldn't find you there to check). I do not notice any significant drop since they announced the "purge", just the same ups and downs compared to before.

In hindsight, I regret deleting all those fake followers and bots that IG was not deleting for me. Hadn't I done so, I would be now way above 10k followers and don't get me wrong, I'm not after just a number, it would just have unlocked the possibility to use the "swipe up to URL" function in the stories...

Btw, in December, I had a "cleaner" app help me delete about 30% of my followers: half of these did not have a profile photo and had zero activity, and the other half had never reacted/liked on my past 200 posts. So to sum up, in my opinion Instagram has become totally useless, and the only reason I'm still on there is for the real connections/friends/collaborations that I made there but that date from years ago.

Why see a new feature that makes it easier running multiple accounts and immediately start to worry about free booters?

I'm wondering the same thing. I don't see how this makes any issues worse. It's not like it's difficult to post to multiple accounts already. It just makes the process faster. Stealing won't get any easier.

Care to expand on why? It's probably the most stable social media platform right now.