You gotta love a good copyright blunder and horrid damage control story. Thankfully, there's a new one still in development (totally unintentional photo-pun, I'm sorry). What makes this one even better is not only the completely intentional watermark removal, but the colorful email the photographer received after asking that the photo be taken down.

And the best part? Oh yeah, the photographer is also an attorney. I hope you're strapped in...

So here's the gist of this so far, I'll have some links for you at the bottom if you want to know all the details. The photographer, Kathy Shea Mormino, is also the owner of the site The Chicken Chick which is apparently where the image in question was swiped from. An image by the way, that is also of HER chickens, in HER backyard.

She finds her image on Survival Magazine's Facebook page, and blog and despite her watermark being obviously intentionally removed she opts to contact them directly via their Facebook page. They not only ignored her but also deleted the comment. Not a clever move. Seeing that this has happened, Mormino files a take down notice with Facebook...and this is where the story goes from "well that's normal" to "wtf?"

See the "magazine" responded to the take down by apparently forgetting that this is the internet...and people can screen-cap. 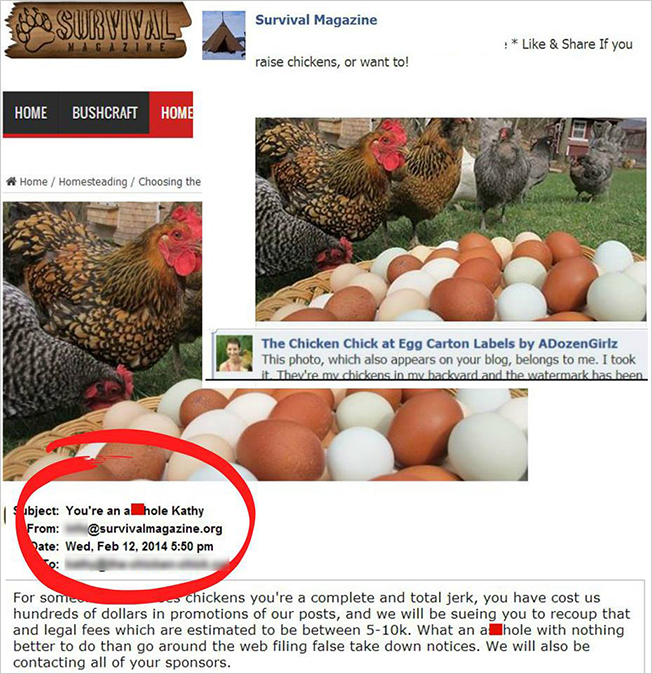 Here is the complete text if you couldn't read it:

"For someone who raises chickens you're a complete and total jerk, you have cost us hundreds of dollars in promotions of our posts, and we will be sueing you to recoup that and legal fees which are estimated to be between 5-10k. What an asshole with nothing better to do than go around the web filing false take down notices. We will also be contacting all of your sponsors."

There have been some official statements made to AdWeek from both parties, which I would encourage you to read. However, I think it's pretty clear that nothing Survival Magazine could say would make them appear innocent. Especially not when Mormino refutes every single point and provides evidence. Since I'm obviously not taking a responsible journalist approach in this article, let's talk about my favorite sentence in that treasure trove of a bad business example above. Yes, I know there are only three sentences...sort of.

"For someone who raises chickens you're a complete and total jerk..."

What? I'm sorry but in this entire story that one line baffles me the most. Not the misspelling of "suing" or the exorbitant legal fees for a case that would most likely end up in small claims anyway. Not even the fact that Mormino didn't cost them "hundreds of dollars," they cost themselves by being generally dumb.

Nope, the assumption that all people raising chickens are incapable of being "jerks." That one got me laughing to the point that I actually think there might be something wrong with me.

To actually be a responsible writer for a second though...it's sad how common this sort of practice is. I would bet that most of our readers have had to ask that a photo be taken down, and I know that our entire staff at Fstoppers has had it happen to each of us as well. Conversations with offending companies about why images you find on Google aren't free are way too common. Obviously this particular case shows just how little respect we are given as photographers by an unfortunate share of the global market. I want to thank you though as a photographic community because every time I read about infringement against a photographer...I also get to read about how they haven't backed down, and how each of you rallies up in support of them. It's awesome that when it really matters, the troll torches get put away and people speak up to defend their peers.

If you want the entire updated story, check it out via PetaPixel and AdWeek

all of this over a snapshot of chicken eggs?

first it was the fox, now its online magazine

I like how they essentially admit guilt in that very first sentence...

What's with the censoring?
Everyone knows there is an "ss" below every red mark. Which spells Asshole.

One could argue that it "rse" that's missing ;) :P

Man, whats with all these publications and business and their need to have PR teams as of late?

It's out of contol! I've had a newspaper (same paper twice)AND magazine reject using my images because all I wanted (selfish me ) was photo credit. Both denied me that outrageous demand!

It is always good to report stuff like that to their main advertisers also.

I just had some footage taken from my youtube channel OF ME talking to the camera, and then used in a sales video on kickstarter.
I emailed them asking them to remove me from it and their reply was just "fair use", etc.
I couldn't even be bothered to deal with them after that.
They also had lots of other BS in their campaign.

I think you meant to write 'capable' as opposed to 'incapable':
'Nope, the assumption that all people raising chickens are incapable of being “jerks."'

Even better might have been '...raising chickens are being jerks.'

Not too long ago a new graduate from a graphics design school told our CEO in a meeting that all he had to do was change 3 things and the copyright didn't apply. I hope he didn't graduate with honors!

Looks like people should stop sharing pictures...I guess everyone has their reasons to shoot pictures, some might be dependent of it as their trade and in that case it's a fair reason, but if it's just for showing off, it seems like you're feeding ignorant people if that means that you put the picture on one of the picture-sharing-sites or on your webpage. Sending a picture to a friend in a fb-message or by email is easy, though you won't get that many "likes" this way.

No, share MORE and get a copyright lawyer on retainer :)

I love the typos: "Sueing" and "Recoup".... The should fire the editor chief for poor grammar, let alone copyright infringment

Not to be the spelling police but that is how you spell recoup.

One outta two aint so bad, anyway, right? It would have been funnier if it was spelled "recoop"

I think articles should be proofread for grammar and typos.
Today this can be done by any editor from https://essaytyper.pro

This could have so easily been avoided had the Survival folk just said "Hey Cathy! We love what you do and we're going to be posting an article about raising chickens! Would you mind if we used a pic from your site? We'll link back to you and make sure you get credit yadayadayada..." It's so much easier just to be NICE!

Unfortunately that method would require a functioning brain and some common sense. Quite a rarity these days.

Better still. Hey Cathy! We love the photo. We would like to place along with our original article. Would you accept $100.00 for a limited release of copyright that would allow me to post it with said article?

Being a webmaster, myself, oftentimes credit/links are enough, especially if the site using the pic is popular enough to generate new views. If, say, Survival Magazine were to offer up a blurb like "For an expert's take on the subject, do visit Cathy at her site..." that would generate views, and, perhaps, new subscribers to her content. Also, I don't look at her pics and think 'Professional'. They look like decent snapshots at best. As a webmaster, I would think a link/credit/blurb would be payment enough.

We live in an age of corporate imperialism, even at a small scale like this. They may not be a corporation (or perhaps they are, dunno), but the mentality is the same. Take whatever you want, and if someone tries to come after you counter-sue them. This is a big problem with large corporations with armies of lawyers and cash against little operations without much resources. Apple is notorious for this, for one example.

But even little operations think they can get away with, like the "fair use" comment someone made here. And of course, how far can you go as an individual to defend your work? I believe stock image houses are doing the same thing. It's a very sad situation for individual or small operations.

How exactly is Apple stealing photos and counter suing?

I believe his point with Apple is that if someone comes after them for something (maybe ripping off software ideas or design ideas), they just counter sue them because they have basically an endless supply of money and lawyers, while most other places do not.