Is Your Favorite Movie Linked to a Sex Scandal?

You probably have heard of Rotten Tomatoes, a website that critically reviews movies and TV shows, but have you heard about Rotten Apples?

In a similar way that many of us choose to forego certain foods or items due to ethical considerations, now you can do the same with TV shows and movies. Although the site has yet a long way to go in keeping up with all the new allegations coming out, it's quickly gaining visitors every month.

Acting as an "online database that pinpoints which films and TV shows are associated with people who have been accused of sexual misconduct," Rotten Apples is a creation of four advertising professionals based in Los Angeles, namely Tal Wagman, Annie Johnston, Justice Erolin, and Bekah Nutt.

Vanity Fair reports that the idea arose during October 2017, when Harvey Weinstein's wrongdoings were only slowly coming out in the open. During a discussion about the recent scandals, Wagman, Johnston, Erolin, and Nutt thought it'd be useful to have an IMDB-like resource for movie fans to gather information on whether their favorite actor or movie are involved in a sex scandal. Not just to give transparency and information to consumers, "it could serve as a resource that also keeps alleged abusers in check."

The practical side of Rotten Apples meant creating an online database of all popular movies and TV shows, "including the names of at least 19,000 actors, actresses, producers, directors, and more," according to Vanity Fair. "They spent about 15 hours doing research on a medley of accusations in order to supplement the data with credible resources, then merged the two datasets together."

The site is clean and minimalistic, and all you have to do is type in the name of a TV show or a movie and it'll give you a rating of either "fresh apples" or "rotten apples." The latter will also pinpoint a credible source that depicts allegations against the "rotten apple" in your movie or TV show. Currently, they don't intend to put any advertising on the website, and are funding the cost of running the website themselves.

Although, it may feel that today everywhere we look new allegations are coming out, there is light at the end of the tunnel: "If there is one silver lining to this ongoing catastrophe, it’s that not all movies and TV shows are tainted."

Have you tried searching for your favorite movie?

There are lots of sex creeps in the Hollywood film industry? Noooo!!! Surely they lie?? 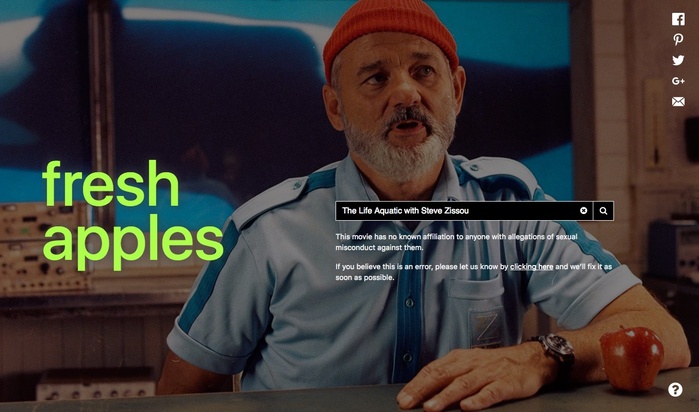 Shut it down, folks. This is all the information we needed.

Personally don't find the need for me to reference it, but it's great for those that are interested in that. That being said, I think they ought to either only add someone if they're proven guilty, or they ought to distinguish between those accused and those proven guilty. The way it seems to me is that they're (probably accidentally) presenting these people as already guilty, and I don't think that's a good idea.

Well said. When is the Weinstein trial? And the Spacey trial?

Will there be a database telling us if our country's super market chains employ persons who have been accused of sexual misconduct? I mean we can't buy food from those companies then huh?

I do not think that is quite the same. Celebrities are brands of themselves essentially and with that comes a responsibility. Using your personality to make fans buy into you and the movies you produce or act in, is slightly different to retail staff and their personal life.

What about the countless employees and additional crew, actors and staff who went into making those movies and tv shows. They rely on the success of those products to make a living. should they be punished because one actor or producer on a film did something horrible? Boycotting the products doesnt hurt the person who did the crime it hurts all the innocent people in the industry who worked on those products. Preventing an actor from getting more work because of what they did is one thing but dismissing the value of something that took hundreds of people to create just because a specific person is involved isnt fair in my opinion.

But they're allegations. Don't forget what that words means.

I think we should boycott any media who worked with accused in any possible crime or ethical violation - both printed and electronical.

Come on... When we have a lot of people who believe that their feelings about something are undeniable facts and the rest do their best not to hurt these feelings - who would care about justice?

In the U.S. convicted sex offenders are listed in a public registry: https://www.fbi.gov/scams-and-safety/sex-offender-registry So it does apply to all jobs, super market chains, neighborhoods, etc. This is not limited to just Hollywood and it's been in existence for a long time.

There's a huge difference between a convicted sex offender and someone who has merely had an allegation made against them. Society becomes a scary place when mere allegations become the equivalent of a conviction that was arrived at through due legal process.

I think most people know that. Please understand I was being sarcastic.

I thought the same thing. On Fstoppers to support fellow photographers and then they use Unsplash. Perfect.

I would be happy to provide lower cost images to Fstoppers instead of their using Unsplash photos.

This is disgusting. This is nothing more than slander and gossip. These people aren't even able to defend themselves as they would if it was a court of law. Can we please stop with this junk! This is just mob mentality. Also what the heck does this have to do with Fstoppers?

As I mentioned in a reply comment, there is already a sex offenders registry and it lists convicted sex offenders. https://www.fbi.gov/scams-and-safety/sex-offender-registry While the intentions of this site may be good, it's only linking to news articles and doesn't have anything to do with actual convictions. This could become a database for baseless accusations. While there is most definitely an issue that needs to be addressed, it should be handled in a court of law and by law enforcement officials, not some random internet folks.

I know this is off topic, but using an Unsplash photo?? Come on Fstoppers you're better than that.

I am no fan of Hollywood. That being said, whatever happened to innocent until proven guilty?

If there was crime, in USA is police to solve it. If it was not crime who cares and why? After so long time there is no reason to talk about it... you do not tolk about what your nation done to natives, so why tolk about a few stars, which career is based on their look.