The Best Thing I've Ever Done to Improve My Instagram Experience

Until recently, my experience with Instagram was becoming increasingly lackluster, and I finally decided to take a step to fix that. I actually enjoy using the app again now.

A couple weeks ago, I idly opened Instagram and felt instantly dissatisfied. I was scrolling through endless memes, mediocre food photos, general miscellany, and of course, ads, all with a few real photographs interspersed between the fodder. I realized that the original reason I used Instagram — to be inspired by the photography of others — was being obscured by all these other things. And so, I did something I had been avoiding doing for quite some time, mostly out of feeling guilt for some perceived slight against those to whom I was doing it: I unfollowed people — a lot of people.

I was pretty ruthless. That acquaintance that started the keto diet a week ago and is now giving nutritional advice six times a day? Gone. That meme account that was flooding my feed with the same tired reposts from other accounts 20 times a day? Definitely gone. I can go to Reddit to see those. Someone posting variations on the same selfie with pseudo-profound captions twice a day? Sorry, bye. And then came the harder part: friends and photographers. I kept most of my close friends, but for acquaintances with whom I don't share many common interests and with whom I don't regularly communicate? That's what Facebook and texting are for. And what about photographers? Well, if their work wasn't inspiring me and I had just followed them out of politeness, it was time to bite the bullet and unfollow. After all, there was nothing rude in doing so. This wasn't the follow/unfollow tactic that so many employ to increase their numbers, and I wasn't obligated to follow anyone. My feed is my feed; I can do what I want with it, just as anyone else can post whatever they want. I simply chose not to engage with a lot of it anymore.

By the time I was done, I had unfollowed hundreds of accounts. It got easier as I did it more and more. In fact, the only backlash I got was from the very first account I unfollowed. The guy commented a middle finger emoji on my most recent photo, then blocked me. Not sure he's going far in photography with that professionalism. 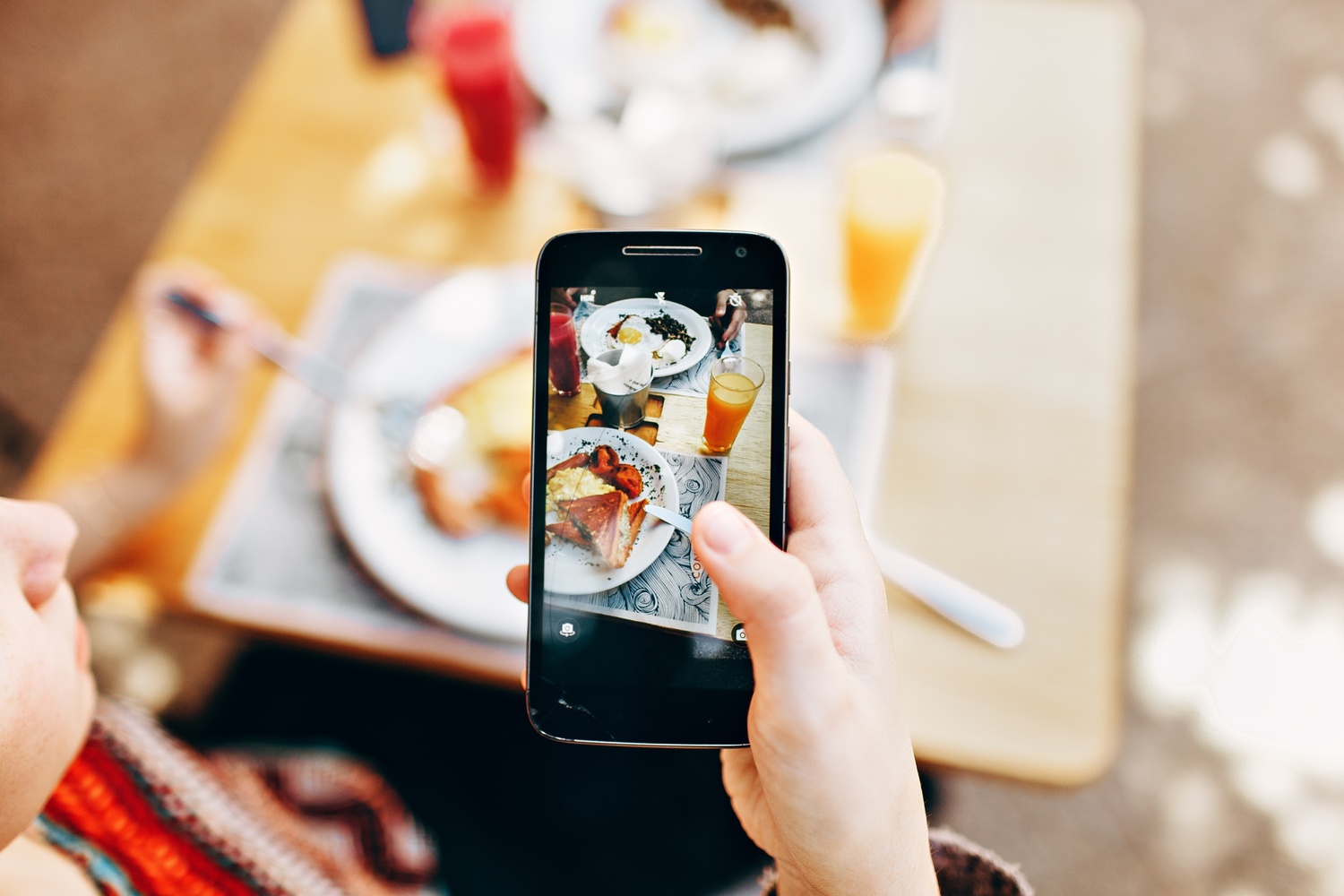 I don't care about your breakfast! Also, that toast is definitely not keto-friendly. (Photo by Helena Lopes, used under Creative Commons.)

Now, my followers list is nothing but close friends and family, photographers whose work truly inspires me, a few business connections, and people with whom I share common interests or admire. And in creating that, I've strongly reinvigorated my interest in using Instagram. Instead of mindlessly scrolling through my feed like it's a daily chore, I now thoroughly enjoy looking at every post (besides the ads). And because of this, I've genuinely improved my interactions. Because I'm truly taking in everything I look at, I'm more likely to comment and start a real interaction, and I leave the app feeling inspired by the work I've seen and having actually learned from those I follow. It's also much more manageable using the app now. Instead of being stuck in a seemingly endless feed, I can easily keep up with everything without missing a post by spending five minutes on Instagram twice a day, even with the post order all messed up by the stupid algorithm.

Of course, this might not work for everyone. I don't use Instagram to find work (though the occasional request comes in through it), and I don't make it a point to post regularly at all. For some people who need to maintain commercial connections (or at least the semblance of them), keeping a ruthlessly pruned following list might not be the best idea. But if you're like me, it might do you a lot of good to ask yourself why you're on Instagram and if you're curating your feed in a way that's tailored to that purpose.

Sorry if I unfollowed you. It was nothing personal.

Business / February 19, 2019
The Instagram 'Tricks' You Should and Shouldn't Be Doing

Legitimately the best advice I have read in a while about 'how to enjoy Instagram more'. I also suggest this route as when I do - people's work I enjoy and learn from; will be seen more! Thanks Alex for being so bold and doing this and writing it out for us!!

Really appreciate the kind words, Adam! Thanks so much!

Awesome, Alex. I've JUST done the same thing on Twitter. I used to be a big networker and supporter of others (without being too aggressive), but found too many play the follow / unfollow game, and many others just aren't attentive enough to be great networkers for their businesses. I still network on my business accounts, but went though a big purge on my personal, so that it's JUST what I want to see. And it's been very nice.

As for the middle finger guy - yeah, that's very poor character. BUT, with the massive follow / unfollow scam being so popular (basically, the middle finger of social networking and a con game), I can understand negative responses IF someone mistakens your unfollow as a mindless bot playing them. That's just a possibility, but most likely, he was just being a total jerk, and the middle finger - in public as well - is just poor taste.

Thanks, Josh! And yeah, the middle finger guy was ridiculous, and we had been following each other for a few months, so I have no idea how he could think I was playing the f/uf game. It made me laugh either way!

I mean, it's pretty sad that someone keeps such close tabs on who unfollows them to begin with. You really need to make a conscious effort to do so, using 3rd party apps and whatnot. That time is better spent doing something more productive, like, I don't know, creating better content.

Psh you know I love your work!

So did I, Hans! Great article, Alex. I did this a while back and 100% agree it helps the overall experience. I did it via a script though, talk about ruthless.

Doesn't the "Mute Posts and Story" accomplish the same thing without having to unfollow them and risk a middle finger emoji?

This is what I thought.

Good advice. Frankly I think we all know we have people we don’t need to follow, and I just purged 25% of them. I’m guessing I can purge another 25% and not miss much.

So you mean if you follow boring accounts you get a boring feed?!

Sounds like a healthy thing to do. I do the same every now-and-then, but not on the same scale. I still follow some people because they like/interact with my content and it feels polite, even if their work isn't really inspirational for me. Well done! A question pertaining to the follow/unfollow crowd: you say you unfollowed a couple hundred accounts. How many followers did you lose in the ensuing days? What percentage, roughly, noticed that you unfollowed them and reacted by unfollowing you back?

Almost none. I unfollowed around 500 accounts and I've gained about 30 followers since.

So funny, I was feeling the exact same way and did the exact same thing last week. It was difficult at first because of course you don't want to hurt feelings and I strongly hate the follow/unfollow thing but like you, this wasn't my intention. I had starting following alot of photographers just to be nice, and it isn't that their work isn't good, it is. It just isn't my style and doesn't inspire or do anything for me. Now when I open my IG I see things I want to see, stories I actually want to watch instead of just skipping over them every day. Best thing I did! Great article, glad you got satisfaction from it as well.

I had a problem where I wasn't comfortable posting professional pictures of clients on instagram because it was my "personal" account and I didn't want my friends and family feeling how you feel about the friend with the keto diet.

I decided to start from scratch and create new instagram with organic followers that were actually interested in my pro photography work.

I did even better two weeks ago, I deleted my whole Instagram account. I carried this thing around for years just because... you're supposed too, it was a chore. What a relief, not only am I not missing anything in my life, but it's so liberating. Worked so well for me that I kept going and deleted all my social account save for one; now I need to concentrate on a single social account and I get to spend time on things I actually enjoy.

Yup, the quality of your feed is directly proportional to the quality of the creators you follow.
If they ain't creating content I'm interested in, I ain't following.

I did this many months ago. It's been great; less content that doesn't apply to me, more that does. Though the ads have ramped up, but hey, I can appreciate what someone else is trying to do.

My gripe is that I don't see posts in order... and some of the people I follow, I don't see them at all unless I go to their account. Major fail. IG has gone FB on us, and that's a major issue due to them being owned by FB.

This has been my approach from the very beginning. Instagram is still consistently disappointing.

Muting comes in handy and isn't nearly as offensive if the person whose stuff you don't want to see knows you or follows you.

I did this as well a while back but took it one step further and created a personal private account for friends and family. Its nice to share a personal picture without having to worry about what hashtags are best.

I've been doing that since the first time i use instagram, only follow the one with portfolio that amazed me

Yup, I'm doing this once in a while - worth noting is that you can "silence" accounts instead of unfollowing - it works best for those with ok posts, but terrible stories :P I just wish there would be a way to opt out of IGTV...

I have to do the same. To much noise in my feed. I wish we could have lists like on Twitter. You put accounts into lists without the need of following them or organize your followings into "familiy", "friends", "Inspirational" or "Comment once a week to stay in touch"

I've made multiple accounts, so that I can keep personal life stuff separate from my "professional" stuff, ...and of course, my dog has an IG account too! Because, why not? (https://www.instagram.com/oldtoby_1eyedpom/)

Same here. I have multiple interests so I have a personal account for friends and family a automotive account for Jeep and Overlanding stuff and my Landscape photography account. Each account follows related accounts and that way I can pick the feed I’m in the mood for.

Here's the one I made to troll my sis: https://www.instagram.com/horsewholoveswaffles/

I created two accounts. One for work/inspiration and another for personal/non-photo friends.

This way I can keep an archive of family stuff and interesting street/travel pix on my personal without sullying my work stream with things clients don't care about.

Having the personal account also keeps my Mom from being forced to look at the occasional lingerie or nudes I shoot for work :-0