Five Ways to Use the Sunrise for Photography of People

Sunrise and sunset are often beautiful times for photography and we go out of our way to make shoots happen at those times. Once we get there, however, how is it that we best make use of that light?

Light is the basic material we have to work with as photographers, so it stands to reason that we should definitely be aware of its qualities. For the purposes of this article, we will look at three basic qualities that sunrise light has and explore how we can best use them. Those qualities are direction, contrast, and color. My good friend, Etienne Bossot, from Pics of Asia, and I discuss these three and what we look for in the video below.

It is important to note that light before the sun crests the horizon is much softer and can give an almost ethereal quality to your images. Once the sun moves into full view and directly illuminates your subjects you have many more ways to make use of it. However, it can be extremely contrasty and you will need to make decisions about what to expose for as the scene may not fit completely into your sensor's dynamic range. So, let’s take a look at a few ways we can go about that.

By placing your subject perpendicular to the rising sun, you are able to make use of side light. Sidelight is, as the name suggests, light coming from the side. As it does this, the opposing side of your subject gets cast into shadow. Having light on one side and shadow on the other is a great way to create a three-dimensional look to your photographs.

Utilizing backlight is another approach to making use of the sunrise. Backlight simply means light coming from behind your subject with relation to the camera. This can be used in multiple ways. In this first example, we’ll be exposing for the subject.

Here, I chose an exposure that would render the boat repairman’s skin naturally, but because of the strong backlight, I get the haloing around him that you see below. My sensor and lens here are unable to hold the contrast that my eyes are, and as such, I can make the decision to expose for only one part of the range of light. This technique doesn’t always work, but for this scene, I feel that it offers a softer look that works for the subject. 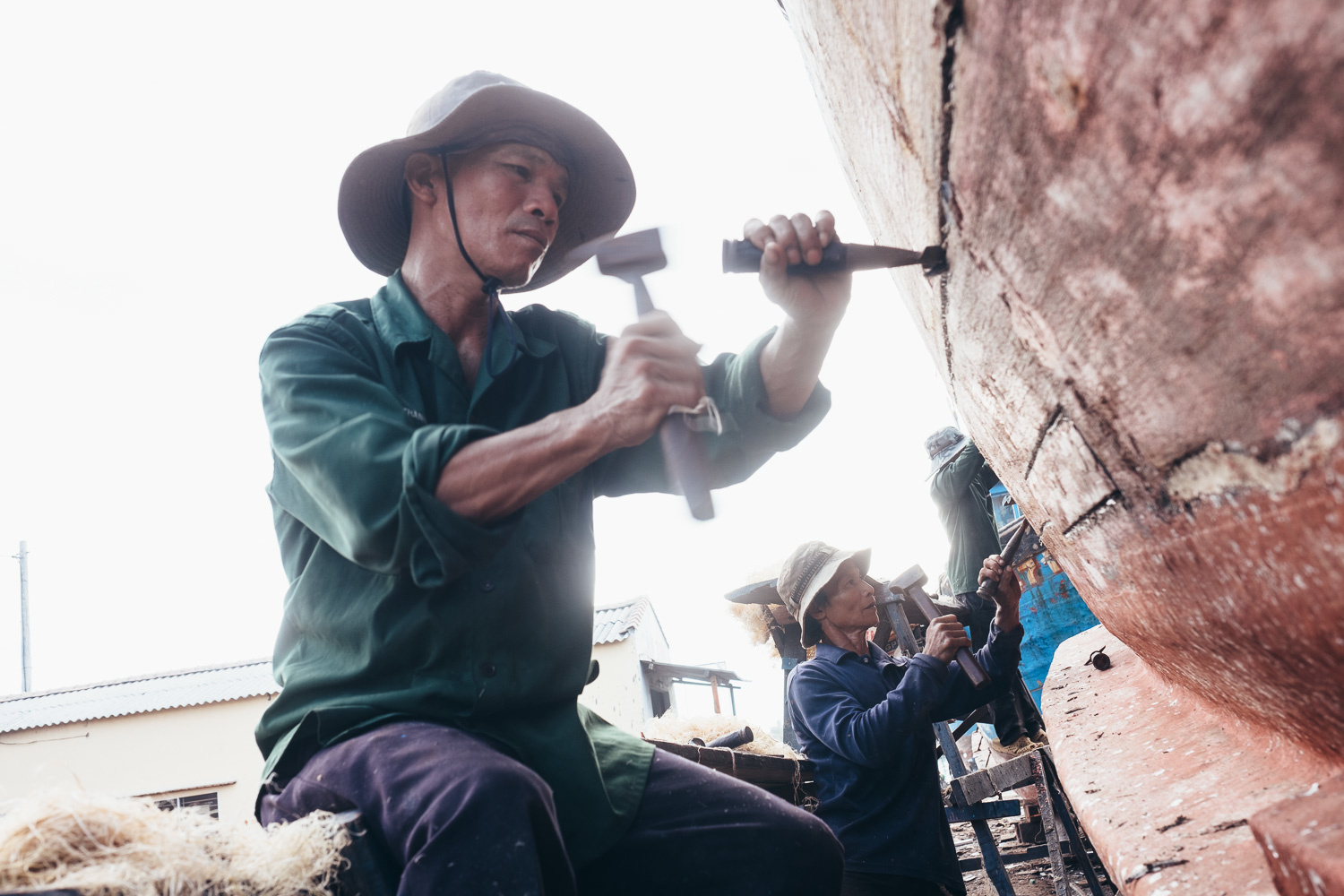 One other possible way to make good use of backlight is to create silhouettes. This is simply done by exposing for the bright sunrise sky behind your subject rather than the subject itself. By exposing “correctly” for the brighter sky behind, you will plunge your subjects into the darkest tones your camera sensor can record and render them with little-to-no detail.

The key to a good silhouette is defining the shape of your subjects. Because you have no details or tones to recognize the shape of your subject, only the edges will read as a shape to your viewer. For this reason, it is important to pay attention to the gestures of people in your photographs and separate them from one another. A person with their hands at their sides will render very differently to a person with outstretched arms, for example. As two people hugging will render very differently from two people holding hands and separated from one another.

In the example below, you can see that I waited for all the different characters in this scene to be separate from each other. I also made use of a puddle of brine to catch the reflections of the subjects and make the image especially graphic. Silhouettes are a great way to interpret dynamic scenes at sunrise. 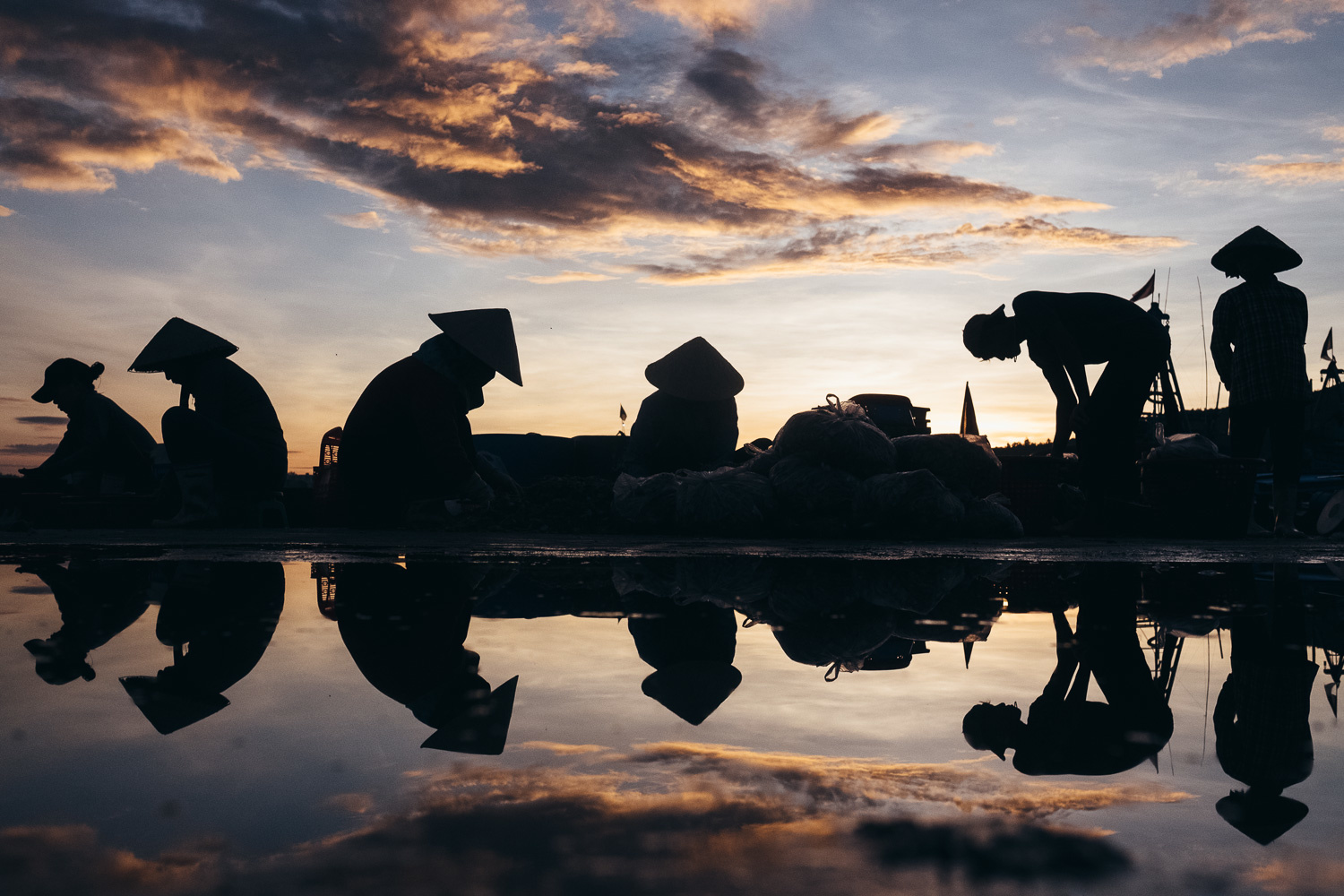 When you have a great silhouette but feel like it lacks a little something, one potential option is to include a sun star. These are simple to create but can be tough to utilize well. They make a great addition to already dynamic and layered scenes.

The basic way to create a sun star takes only two simple steps. First, stop your lens down significantly to an aperture such as f/11 or even f/16 or f/22 if needed. Next, compose your image such that the sun peeks out from behind an object in your photograph. Once you get to this stage, especially with moving people, it is a simple case of working your composition so that the sun continues to be partially obscured and create the star and making sure the rest of your composition still remains strong.

In the example below, you can see the effect of stopping my Fujifilm 23mm f/1.4 down to f/5.6. Although the sun is visible as a flare around the side of the lady, the star shape is not particularly defined. Stopping down the lens would give the star definite edges, but I feel that the glow works best for this scene. 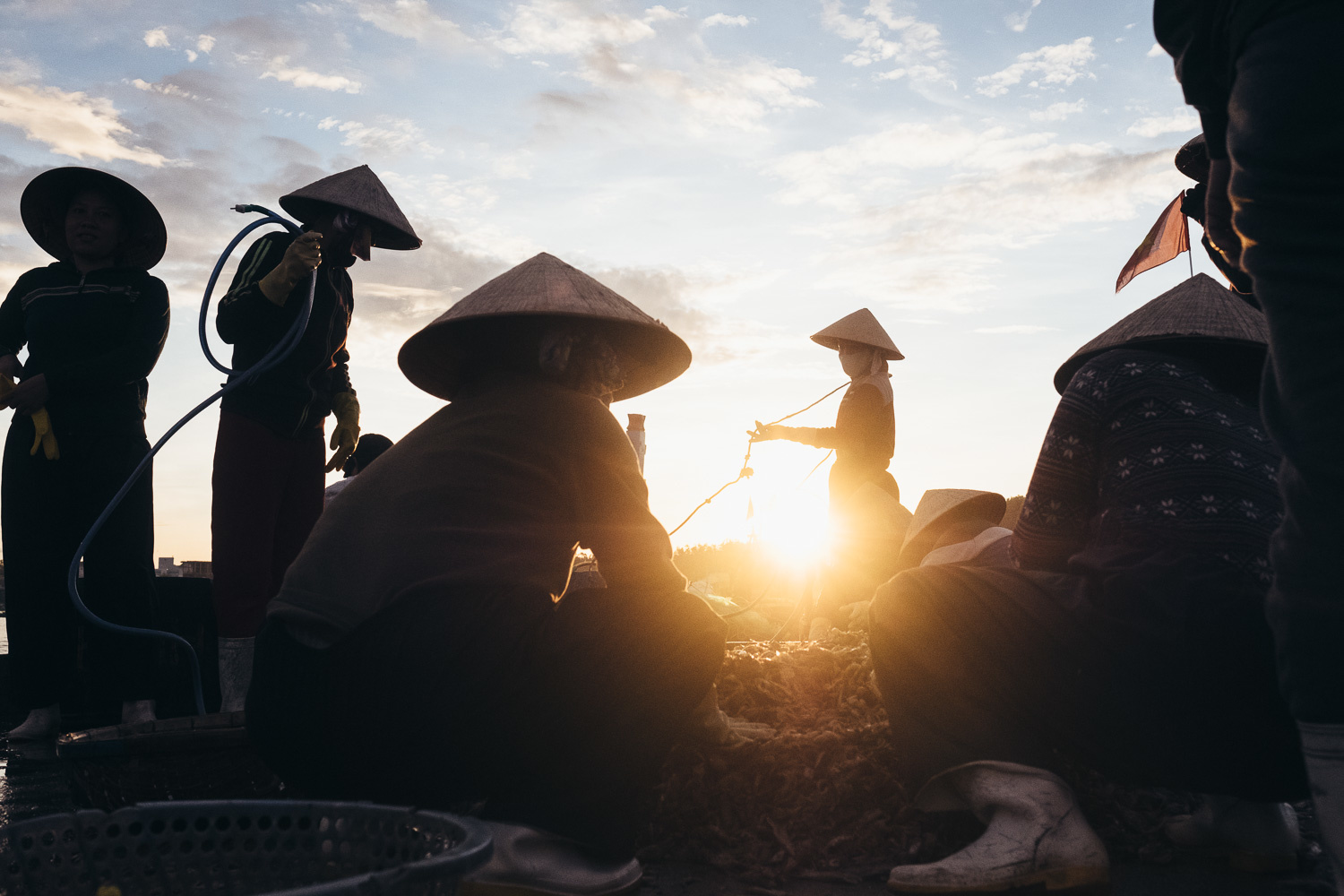 Typically, the sunrise will produce a warm light. One way to play with this color is to juxtapose it against the complimentary color of the cool sky in the opposite direction. You can do this by placing yourself in between the sun and your subject and being careful not to cast your own shadow into the resulting photograph.

The warmth of this light on your foreground combined with the cooler light that touches the sky behind results in a very dramatic feel. In the image below, I wanted to have this woman and her jovial nature really stand out in among the chaos of the marketplace. I waited for the clouds to part and the beautiful morning rays to shine through, then moved over to make this photograph. As you can see, the sunlight hitting her produces a frame that easily fits within the dynamic range of my sensor and produces a pleasing result. 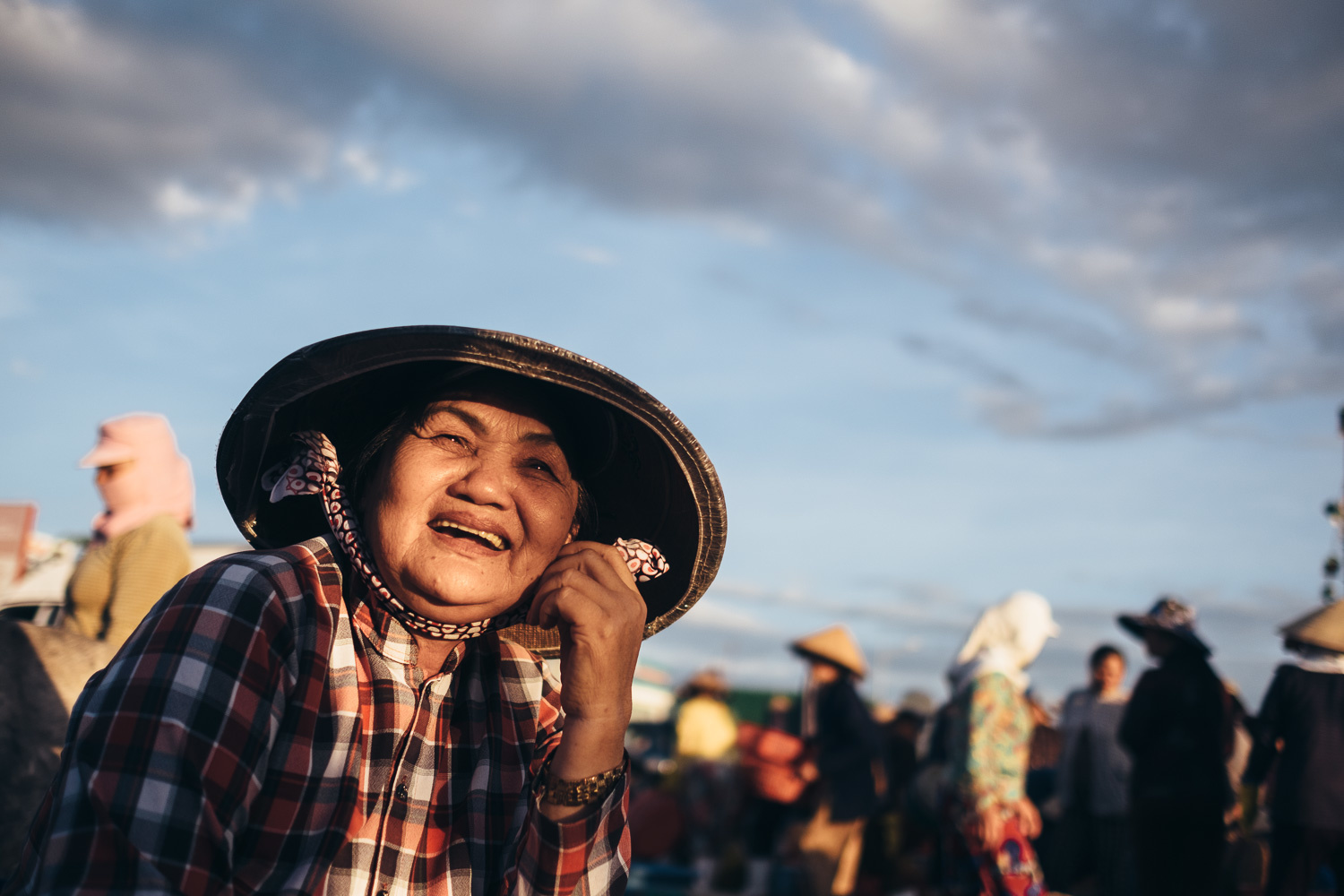 These are five simple ways you can begin to use sunrise or early morning light for people photography. We’ve covered the three basic types of light here: side, back, and front. However, there are so many ways you can expose for and compose around this light. Experiment with it and have fun! I’d love to hear how you use sunrise light and how it applies to your photography. Please jump into the comments below! 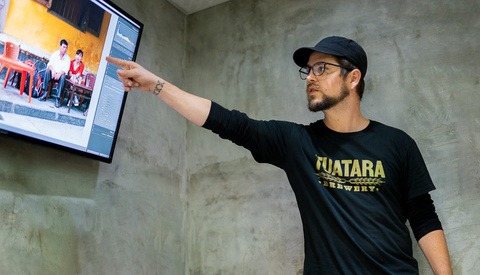 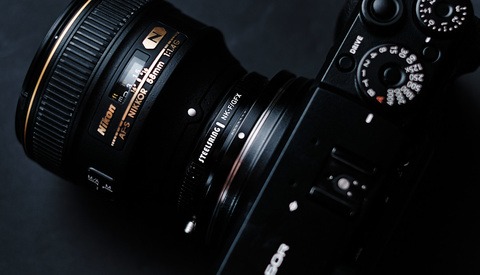 Excellent tips. And they don't call it the magic hour for nothing. :)