A Full Team on the Sierras: Images From 1866

Is a photo everything it seems and what does it say about why and how it was taken? This image from publishers Lawrence and Houseworth shows a full team on the Sierras, but what is it telling us?

Lawrence and Houseworth were established in San Francisco in 1859, using their optical shop as a base for selling stereographs. The Victorians were besotted with stereo imagery and there was a veritable trade in creating 3D views, something for which the camera was a perfect match in producing. Not surprisingly then, it didn't take long for dedicated cameras to be manufactured so that photographers simply had to expose a single image. This coincided with westward expansion across North America and, particularly, the gold rush and establishment of California in 1849 and 1850. This drove a huge thirst for imagery of the west, something which new businesses were able to cater for. Lawrence and Houseworth were also contemporaries of William Jackson who won commissions from both the Union Pacific Railway and the U.S. Geological Survey.

Of course, Lawrence and Houseworth weren't two photographers who traveled around California in their equine equivalent of a VW Camper van, serenely photographing all that lay before them before then spending afternoons surfing or hiking. This was a capitalist endeavor where they hired local photographers to acquire a diverse range of imagery across the state, including major settlements, mining operations, transportation routes, and scenic locations including Yosemite Valley. This was a volume operation that mass-produced imagery for large scale consumption and consequently was relatively low cost.

Photographers included Eadweard Muybridge, famed for his studies of horses in motion, alongside the large scale plates he produced of Yosemite for Houseworth's commission. Although unattributed, it's possible that the image below was produced by Alfred Hart who was the official photographer of the Central Pacific Railroad. 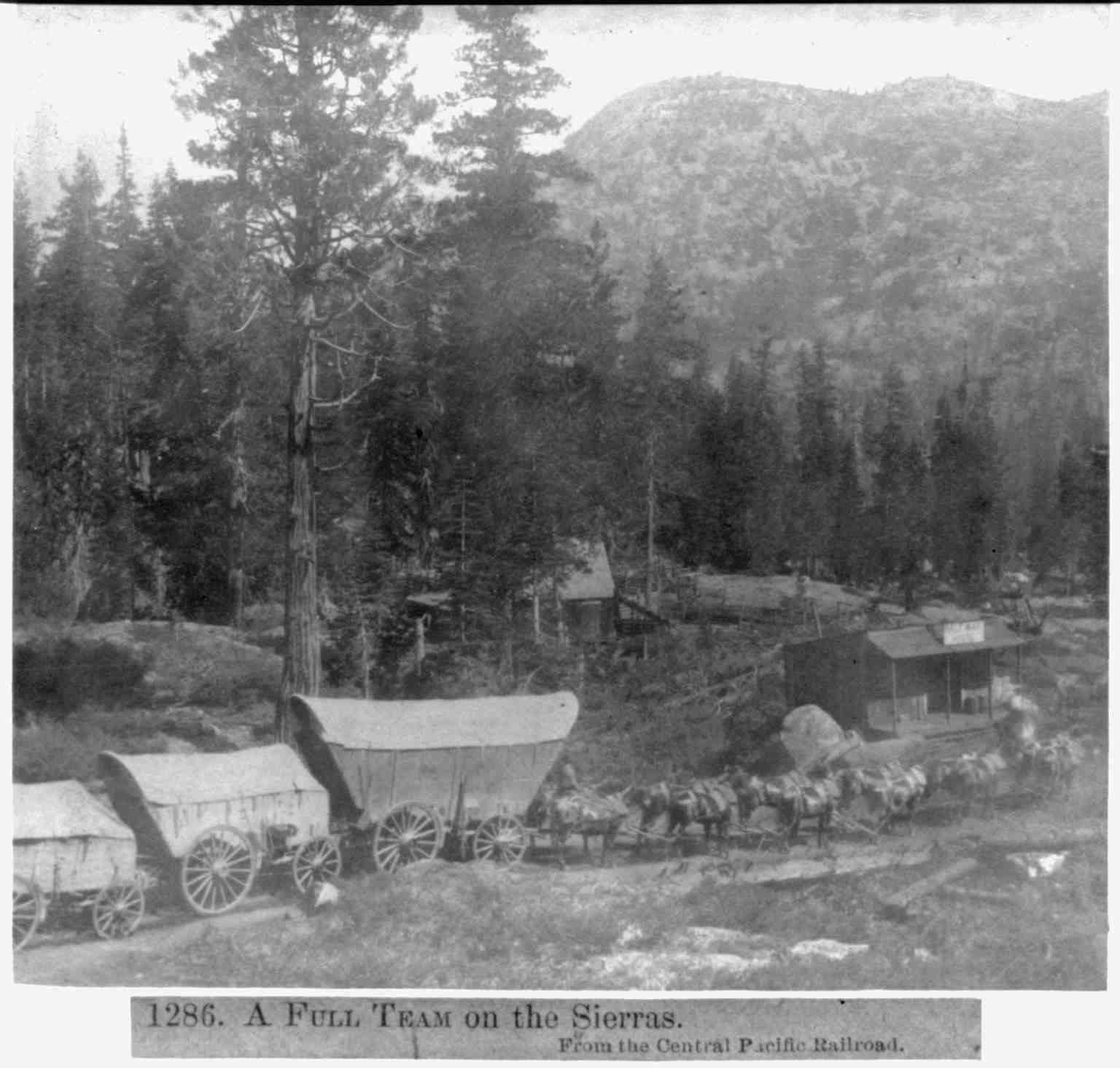 So what does this tell us? Firstly the square crop is a result of the stereo camera and this is one of the two images produced that was subsequently titled to be sold as a stereograph. Secondly, this is a print rather than an original glass plate which explains the generally poor quality and low contrast. Thirdly, given an 1866 publication date it's almost certain the photographer was using the wet plate collodion process. Fourthly, this is taken from the railroad. Was Hart (?) actually on a train and simply taking photos as he traveled? Given how delicate and slow the wet plate process is, this would likely have required the train to be stationary. Was this a scheduled stop? Where was it in the Sierras? Was this a solo team or part of a wagon train?

There is definitely one and possibly two people in the photo. One is immediately in front of the first wagon, whilst the second could be next to the very first horse. The exposure is likely a few seconds so there might be some motion blur. What this then reminds us is that this photo was intended to be generalist in nature, selling as a stereograph that represented migration westward picturing the traditional wagon train whilst implying the progress made by the railroad. Of course, it also represents the specific: specific people, in a specific place, at a specific time. It is the intersection of these elements with the camera that has produced the image we now see. Does this then raise the more intrinsic question as to what happened next? When the camera and all the elements in the photo diverged from this intersection, where did they go and what did they do? What happened to this "station"? Where did the people settle? Where are their descendants now?

The next you look at a photograph, try to understand the technical aspects of its capture, but then think about the general social commentary it makes before contemplating the specific. Try this with both old and new photos, well known and obscure, and make sure to include some of your own family. It may raise questions you hadn't anticipated.

Image courtesy of the Library of Congress and in the Public Domain.

and this very Thomas Houseworth & Co. stereoview is available on eBay right now for $350!