Is This the Most Versatile LED Light on the Market?

Recently, Spiffy Gear had released a very unique-looking light named Spekular. What caught my attention was its ability to combine, shape, and separate one single "light" in so many different ways. From my perspective, having the variety of options for on-the-go shooting held value. I ended up taking the LED light kit for a spin. There were some aspects I liked and some that could use some improvements. Let's dive in.

The concept of the Spekular LED lighting kit is designed to be the "only light you need" to save space, carry more, and have more bang for your buck. One Spekular LED light is composed of four LED strips that can shape into several different light shapes. One strip acts as the source that powers the fellow two or three strips to form the light's shape, as you'll see in the video. The light can be formed into several different shapes for whatever creative output you're looking for, as you can see below.

My first impression of the Spekular out of the box is that the case is sturdy and organized. Yes, this may seem like an obvious feature but I can't tell you how many times I've bought some products where they overlook packaging. It's very important for an on-the-go photographer/videographer and the details do matter.

Inside one case you'll find four LED sections or "strips," four adjustable connectors or "elbows" to connect strips, a mount to attach to light stands, power supply adapter, and a sling for carrying. 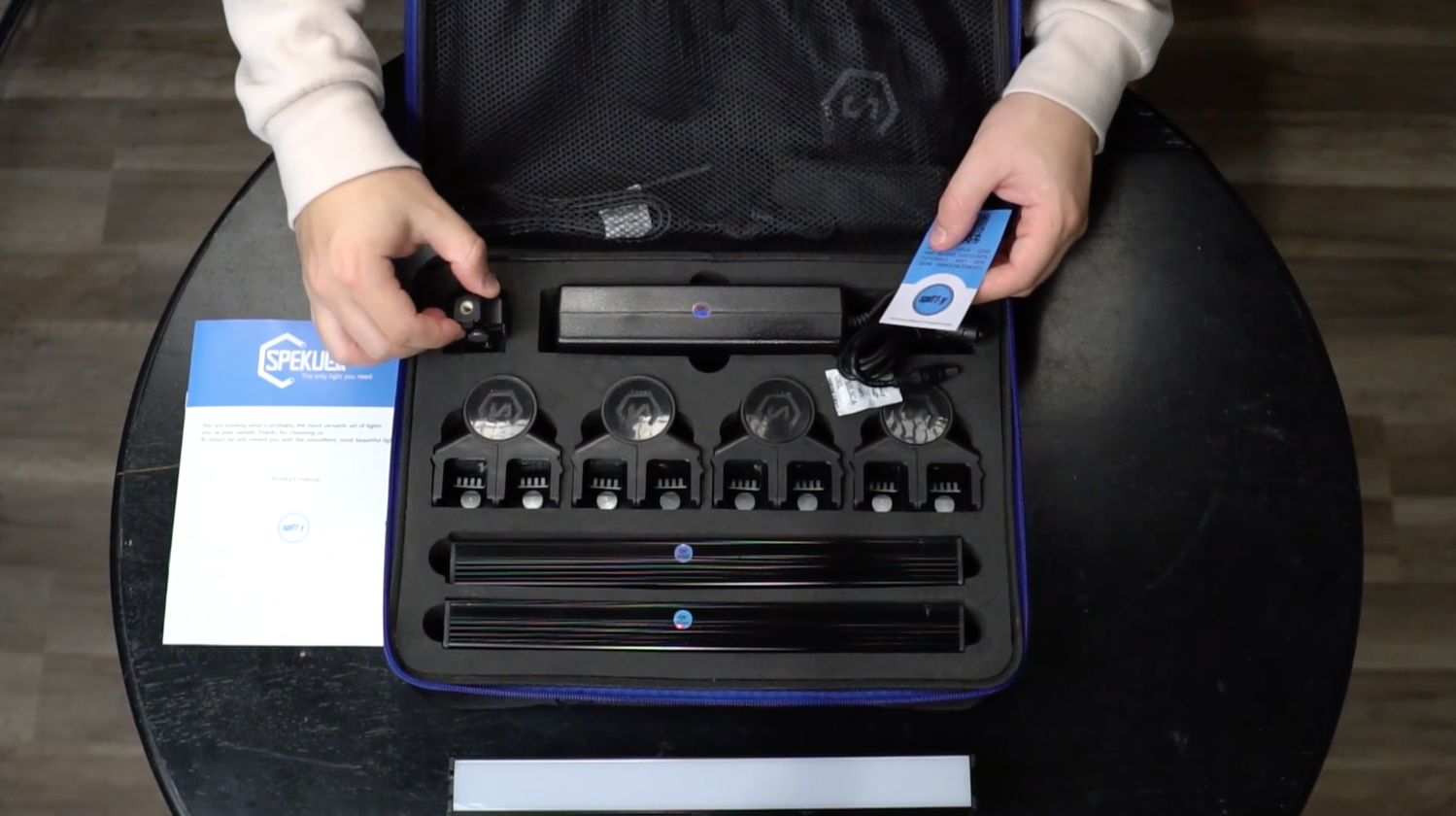 First impressions of the build quality are so-so. I'd keep in mind that Spiffy is a smaller company and I'm sure they did their best to get quality parts for this light, but I felt the materials' quality had a little left to be desired. The elbows are made out of what felt like a standard plastic and I can't be sure on how long they'd hold up with extended wear and tear. Other than that, the light strips are made of durable aluminum that should hold up fine if you're looking to invest in this kit. Each light strip is 30x4 centimeters. They're very lightweight at 2.9 pounds. I'll get into more of the build and quality when discussing the ease of assembly.

Putting together the light has its pros and cons. It is pretty simple to assemble, but I ran into some issues at times. When connecting the light strip to the elbow connector, the male and female connection sometimes felt off and you'd kind of have to wiggle or apply more pressure. I was hesitant to apply pressure because I wasn't sure how the male connection would hold up and could possibly be damaged. 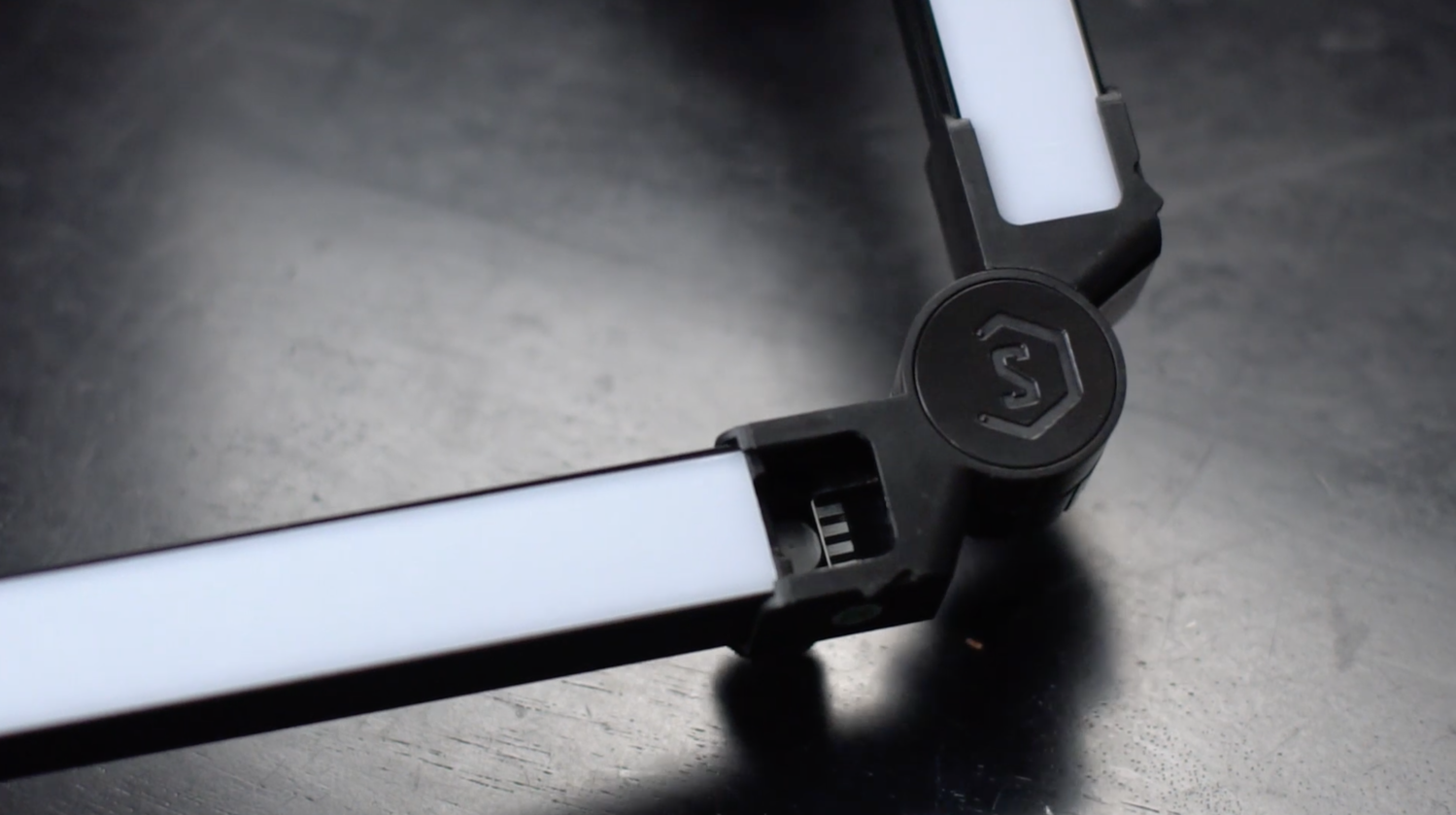 That was really my only concern assembling the light. I'd say just be cautious and connect with care. As stated earlier, there are a plethora of shapes you can design which makes this light very unique. I opted for rectangular because I'm very fond of the catch light shape it gives off.

This thing packs a punch. For its size, at 14.5 watts per light, it sure does throw a lot of light. I've used plenty of different kits at all sorts of price ranges. It produces as much light as some kits priced upwards of $1,000–$1,500. The light color temperature is locked in at 5,600k and has a beam angle of 120 degrees. One of its downsides is that it does not have the ability to change light temperature. The one adjustment available is for dimming from 10–100 percent. Each LED section is nice and compact for travel.

The Spekular extension allows you turn one light into multiple light sources.

To really get the full potential out of the Spekular, they offer an expansion kit. Because one LED strip is essentially the power source, in order to expand the light to a three-light setup, the expansion kit is required. It's basically an extension cord that connects two LED panels that comes with additional "gap-free" connectors.

Another feature is the Spekular Star Adapter. I personally didn't use them, but if assembled, they do put out a unique "star" effect that you don't see too often.

It's a great idea and concept but this kit has room for improvement to reach its full potential. I've mentioned it a multitude of times in this article, but the ability to break down a one-light setup into a three-light setup using the same LED light is very clever. It's relatively easy to put together and operate right out of the box. There are features I like, but there is room for improvement. The build quality could use a slight upgrade, especially with the heating concern I ran into when using the kit. I would love the light to have the color temperature to be adjustable. You can justify the price either way; the LED does throw a good amount of light, but there are some features lacking that you could argue doesn't justify the price.

You can find more information and purchase the kit and accessories from B&H.

These definitely look pretty cool, I wouldn't mind trying these out

I wouldn't mind either if they were somewhere around $150-$200. Led lights -constant and dimmable- are very affordable. The kit looks like it's made in a rush with many weak points and flimsy material.

Companies know that some will fall for the WOW factor without looking at the value. It happens way too many times in our industry and it creates a lack of will to invest more time to produce something truly good.

I recently bought LED lights for my basement (we just finished it) and I pay $30 each. I have two left over and my contractor is going to attach a dimmer and an outlet prong so I can use them by plugin it in a wall outlet. Each light is 1600 Lumens so it's quite good.

I am looking forward to trying them.

They are kinda pricey, but without trying them it's hard to say how good they are. I really like the modular design of them. But at the end of the day, there are a lot of solutions out there for video lighting. Looking forward to seeing some reviews on these

This is really cool! But $650 brings it's "really cool" value back to reality. More than anything this makes me want to go explore an electrician supplies store to see what I can come up with...

5 Yongnuo YN360 LED sticks + batteries can fit into this budget. But with YN you are not trapped into "system" :)

I was thinking more like LED strips with a controller configured into any shape you want... and then use a greycard to color correct any weirdness. Or hell, embrace the weirdness! But these are pretty cool as well, thanks for sharing I'm not sure I realized Yongnuo made a stick light.

Oh... I don't know how many meters of high CRI (to save up om grey card) LED strips you can by within this budget. Most probably - more than enough :)

I like the ring-like look of the 8-sided "star" with a less annoying catchlight than a ring light.

After paying extra baggage charges for overweight bags on a recent trip I'm still looking for a lightweight LED with a high CRI number but in a durable package. Don't think these would take much abuse.

I think I'd rather pick up some of the tubes that Quasar Science makes at that price point.

They also have cheaper ones than those if you don't mind wiring everything up (which considering the Spekular requires it shouldn't seem odd.)

Ohhhh this is sweet, I want it

Actually Aaron Nace of Phlearn made something very much like this a few years back out of things he found at a hardware store. If I recall correctly, I think he estimated he made it for under $50.

I'd love to get my hands on one of these to check out.

I'm 99% certain I know exactly what components they're using, and what product these are actually re-brands/ re-houses of.

If I am correct, they would be fairly priced, with a more then reasonable profit margin, at $500 -hard.

Edit* I had to update this, just in case... Just so anybody looking at these knows, what you are basically getting will be a re-housed version of this https://www.ebay.com/itm/292243165840?ul_noapp=true

Not gonna lie, they're great for what they are, I've used 2 of these LED shop lights on a Paul Mitchell job (in an emergency) and was happy; but the markup is insane for these units.

I just don't see the value for money in this setup. You can get 7 Yonguno YN-600 lights for the price of one of these, and 3 of those YN-600 would hold you for just about any kind of editorial video work.