Some time earlier this year, I had this idea to try and find my own approach to portraiture solely for children. It was a multi-faceted idea which came to me pretty much at random. I was reviewing some of my recent portrait work when I realized that I had only ever worked with a couple of children as my subjects throughout my entire running career as a photographer. I figured out a long time ago that family portraits really just weren't something I was interested in, but that didn't really have anything to do with my actual choice of subjects. Just because I didn't want to shoot family portraits didn't necessarily mean that I couldn't work with kids.

Ultimately, I realized that the reason I was avoiding shoots with children was because I was afraid of how difficult they would be. What started out as a simple exercise solely to figure out whether I could or not, ended up becoming one of the most enjoyable and educational experiences of my career behind a camera. When it comes to working with infants or toddlers, children whose cognitive abilities are still just barely growing, meaning that they might hear you but they can't really talk to you, it can be pretty tricky to try and take their picture. Here are a few lessons I learned along the way.

Pay attention to what interests them most and use it. Realistically, you're going to be using basic human psychology as your ally. Most children who haven't learned the elements of speech will use movement, sound, and touch to communicate and they will usually respond quite well to impulses of movement, sound, and touch. Having other parents, siblings, pets, or even inanimate objects handy will make it much easier for you to direct their attention and reactions. Even sitting a child down in a reactive environment (e.g., tall grasses, leaves, water, etc.) will give them something to grasp onto, play with, and direct their attention.

Honestly, what works for some child may just not work for another. The trick is to simply find out what actually does work for the child that is in front of your camera at the moment. Some infants and toddlers will be more outgoing than others, some don't want to leave mom's side, still others just want to go for a run. Read the situation, don't try to control it because that hardly ever works. I've had some kids pick up sticks and try to sword fight me the entire shoot, so guess what? I picked up my own stick and let them beat it to death with their own. Hell, it made them smile. Who cares if most of the shots were of them holding a stick?

3. Get Down on Their Level

Seriously, stop standing, and get down to their level. To them, you're just some tall thing with a blob of a face and a giant glass and metal object that you keep pointing at them. It humanizes you to get down to their level, it means you can actually exist in their world, and it helps you gain their trust that much more. In addition to all that, it will ultimately allow your shots to be that much more interesting. Infants and toddlers aren't that much different than you or I when it comes to interacting with something that is new or foreign to their world. To want to interact with something new, there needs to be a reason for them to want to do so. Being friendly, engaging, and down to earth (literally) will make it that much easier for you to bridge those communication gaps with the children in front of your lens.

I know, it sounds counterintuitive, but I swear it isn't. One of the most obvious mistakes I ever made as a photographer attempting to work with kids was being hellbent on capturing a specific set of shots. I set myself up for failure all too well, and guess what? I failed. It only took once for me to realize that getting hung up on the specifics of any shot was just unrealistic when working with children. You'll get what you get; it's your job to figure out how to capture it in a way worth remembering. Instead of walking into a shoot with an expectation of the list of shots you plan to capture, enter the shoot with the mindset that you will make the absolute most of whatever you are given during the shoot. Be prepared to capture those random moments between moments. Shoot everything you see, you never really know how it will turn out. One of my most unique shots was one where I captured the child in the middle of a tantrum, but there was a split second where they put their hand to their mouth and their expression made it look like the were just pondering something very, very deep. The shot worked, the scene as a whole was pretty hysterical, but we got a winning shot because I was ready to push that shutter when it happened.

5. Be Confident in Yourself

Really though, you're the one behind the camera. Trust your instincts and your training and make the most of every situation. If you really need a pep talk then shoot me a message on Facebook. Just trust in yourself to capture something, anything, and turn it into a beautiful moment. The parents will love you for it, I promise. Even in the most random, chaotic, and even stressful moments I guarantee that there is still a moment worth capturing. Even if the child is screaming bloody murder, chances are there's a way to capture it that will make for this hilarious moment that you and the parents will laugh at and enjoy. I have found that working with kids, particularly those who are just barely learning to communicate, is one of the most challenging yet rewarding styles of photography that I have ever delved into. It's fun, it's crazy, it's always something new, and it's always rewarding. Just keep at it, make every subsequent shoot that much better than the one before.

I can't imagine shooting children by themselves. I do love photographing them but usually with others to provide the entertainment and I can just watch. 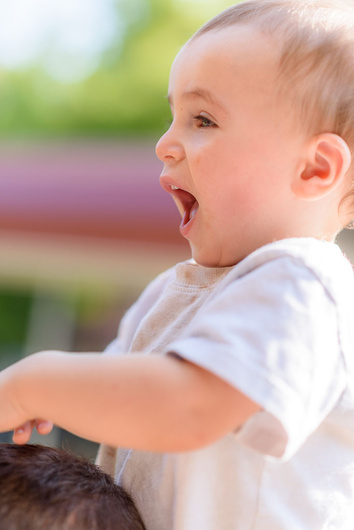 Just assume they are not going to look at the camera. My daughter loves the camera, but thats because shes had one pointed at her since she was born. Kids want to do what they want, you can suggest what you want them to do, but its up to them. Getting the parents involved helps get good natural reactions too. 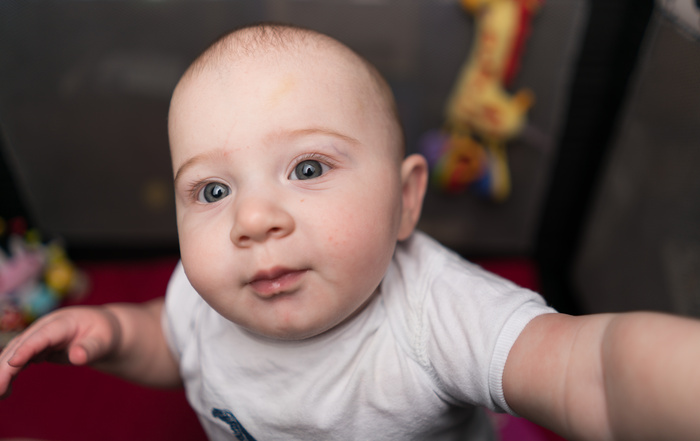 Some great tips here....children are a tough crowd!

Another great tip is a couple of double shots of Vodka - one for you and one for the kid. Makes photographing children fun.

Probably one of the better tips I've ever seen! 😂😂😂