Yes, Terry Richardson is making the headlines AGAIN. But this time, he seems to have outdone himself from the last few times we have wrote about him. According to Jezebel.com, model Emma Appleton shared a screenshot of a message from Terry Richardson which was offering her a chance to have a featured Vogue shoot in exchange for sex.

Emma Appleton sent out a tweet on Sunday with a screenshot of the message she received from who she claims to be Terry Richardson. It read "If I can fuck you I will book you in ny for a.shoot for Vogue." 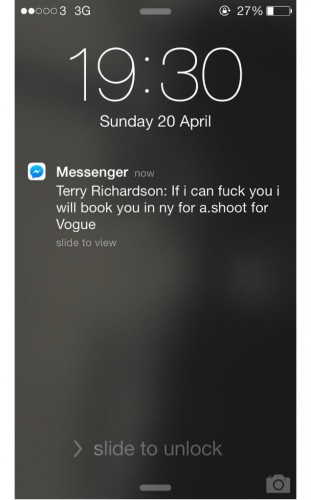 Emma went on to tweet to a few people who replied. Shortly after, she deleted her account. The people over at Gothamist.com were able to track everything she said prior to deleting the account.

Vogue did respond via a statement to Buzzfeed. Communications Director for the US, Hildy Kuryk said, "We have no plans to work with him in the future." After that, we even saw a response from a representative for Terry Richardson. According to Jezebel they said, "This is obviously a fake. Terry did not send this text," said a spokesperson for Richardson, Candice Marks.

"Appleton, who later deleted the message, and whose account now appears deleted, insisted to BuzzFeed that it is authentic. She said she deleted the image because she doesn't want "abuse or attention."

Personally, my only concern about all of this is that the model deleted her account so quickly. It is hard for me to FULLY believe what is being thrown on the table. At the same time, this is definitely a believable story that I would expect to hear about Terry Richardson. At the current moment, there are still not enough facts for me to think the text did in fact come from Terry. Hopefully some more information surfaces in the near future! If anything new comes up, I will update this article.

What are your thoughts on this whole situation going on? Do you believe it or not?

[via Jezebel, Buzzfeed, and Gothamist]

Posted In:
Other
Fashion

Fashion
Fstoppers Rides the Vomit Comet: How These Incredible Fashion Photos Were Shot in Zero Gravity

The only comment that comes to mind is that this "story" is not yet worthy of comment. Not enough data.

The only thing I can't believe is that there is someone still out there on 3g. :(

There are areas with no 4GLTE coverage.

It was a joke, also pointing out that the portion pertaining to Terry Richardson is very believable. DOA!

"Hey Emma! Will be in NY for a Vogue shoot, would like for you to be a part of it..... maybe we could meet up over drinks to discuss it further....."

I think we all know by this point that TR is not a man of subtly.

yes, but why would he send a facebook message asking her for sex, if he can just whip out his dick in the middle of the shoot like he normally does. lol Asking for sex ahead of time is so far from TR's method of operation that it's laughable at best.

Making accusations against Terry Richardson is now about as hot as an 8 year old boy in Neverland Ranch during Michael Jackson's heyday. Regardless of legitimacy though, there's never enough bad PR for TR.

I chuckled. Haha. If that model had stuck it out and provided evidence that this was Terry's message, then so many people wouldn't be abusing her online. Plus, getting some real hard evidence would go a long way to helping a lot of future potential victims.

The way she handled this is really suspicious...

Right, because it's impossible to save a friend's number as a different name and have them text you something outlandish. On it's own, this screenshot is very easily disproven.

The likeliness of a pretty well know model to fabricate this entire story is way more less likely than this actually occurring.

That is something that was brought up before... models who have accused Richardson in the past have actually had problems because of it, particularly being labeled as a "troublemaker". Richardson has called on agencies to drop a couple of those models. I don't see the up shot in the industry for a model to make such an accusation. Yeah, their name is out there a little more, but it's associated with something that most people in the industry just don't want to deal with.

Looking at it that way, I tend to think the model is telling the truth.

Yeah but.. this was sent via FB Messenger.

"The last few times we have wrote about him" Beautiful! John White........learn some english.

I believe what you mean to say is: "Learn proper grammar and sentence structure."
He wrote in English; however he and this site just do so rather poorly on a regular basis.

I write
He Wrote
We have written
I am writing
I write
I will write / he is writing
You know, ... 6th grade kinda stuff.

There are countless of unethical photographers doing this to models... It's a hard thing to stop in this industry but its something that we must...

Never mind his reputation. His photos are crap.

Im not saying he did it or he didn't, All I want to say is if this really happened. Then instead of blindly posting this photo to the world. If it did really happen then she should of contacted a professional news agency and had them verify its authenticity then go public with it. or something along those lines. Seems fishy

Your bad fstoppers for posting this, not that you don't have a "right too", but gee guys can you traffic is something more worthy of your site. Please try not to populate your site with rumors. Let those other human tragedy slum sites do that. Be a credible site. A new low for you guys.

Guys like the alleged author probably hand their mobile sometimes to their assistants for what reason ever. That said ... how can we be sure that when the message was sent it was Richardson himself how stooped so low. An awfully disgusting prank performed by a retarded assistant might be a reasonable explanation as well.

Something that most seem to be missing is that this is not a simple "cell phone to cell phone" text message... The Messenger Icon shows that this is a PM message from his FaceBook account. At least, this is the same Messenger Icon I receive when I converse with people back and forth via FaceBook's PM using my iPhone. Not saying that someone else couldn't have sent this message from his FaceBook account, but at least now, it seems as though the message has a little more authentication about it... i.e. it's just simply not some made up message sent from any cell phone with the name "Terry Richardson" on like I seem to have understood it from most people responding here. This may "seem" to have some validity since it's from his FaceBook account.....

No. It's from a Facebook account using the name 'Terry Richardson' - of which there are in excess of 1,000. There is nothing about what she posted that even slightly authenticates who it was sent from, or if it was even his account.

Yea, like Terry communicates via FB messenger. He'd have one of his towel girls send the message to her.

To me, the point is NOT wether TR posted it or not. Insufficient Data.
The point to me is that fstoppers poured oil in the fire to feed the rumor mill (I know, two metaphors in a single statement, but one didn't feel enough).
Just to gain more hits on the page.

Now this is sad.

There is so much fishy about the whole story that the only apropriate response would have been to let it die in ignorance, or at least wait untill there is enough beef to back up either claim.

I doubt Terry Richardson is sending messages from FB.

Well then, who didn't see this coming. Raise your hand.

Deleting the message or even the account is pointless, the data will still be retrievable from the servers with a court order.