[Op-Ed] The Cameras of Tomorrow: Apps For DSLRs 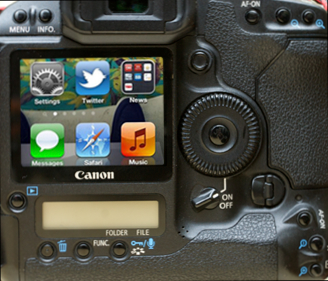 In July 2008, Apple introduced the second-generation iPhone, which gave users the ability to download and install both paid and free native applications. Since then, nearly all new mobile devices have been equipped to support small applications, more commonly known as apps, made by either a third party or the original manufacturer, to add functionality to a device. Who doesn’t enjoy the ability to check their email, use iTunes, or tweet their status to the world while on the go?

What if, much like the smartphones that we use on a daily basis, our cameras were equipped to support aftermarket applications which added functionality and never-before seen levels of customization?

Imagine plugging our camera into a computer or using a Wi-Fi connection to download third-party apps for our cameras. Take for example, an intervalometer app. Rather than having to use clunky OEM software and oftentimes pricey components that are left to dangle haphazardly off of our cameras, we can pay $5 at the fictional Canon App Store or Nikon App Store and download a third party intervalometer. Using the camera’s LCD and built-in joystick and navigation buttons, we’re able to program our camera to take a shot every 10 seconds for the next two hours to make a time-lapse video.

How about an app that triggers the camera via sounds heard through the built-in microphone? The camera could be set to wake and fire when external sounds reach a user-specified decibel level. This would be incredibly handy in remote camera environments: nature photography, surveillance, or scientific applications where noise or danger levels are simply too much for humans to comfortably work in.

While not particularly useful for the seasoned pro or savvy enthusiast, what about a Hipstamatic or retro-camera app for DSLRs? They’ve proved unbelievably successful with the younger crowd on mobile devices, and I can only see a similar app for a DSLR being downloaded in enormous numbers to appeal to the point-and-shoot DSLR crowd (not that there is anything wrong with this). 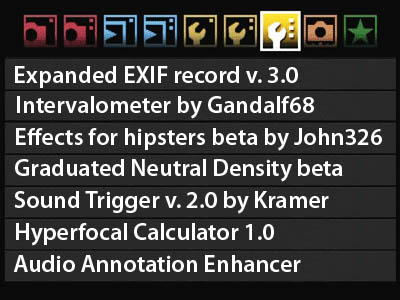 A not-so-distant future?
The ability to go to a virtual camera accessory store would not only be readily accepted by the tech-savvy camera using consumer base, but it would actually encourage the already ballooning sales in today’s digital camera market. Replacing trips to the camera store and removing the sometimes lengthy and costly shipping delays when purchasing accessories online would be such a time saver that photographers the world over would find themselves readily investing money into the growing camera market via camera app purchases. We know that a major driver for any innovation in the market is potential for profit, and the potential here is not only huge, but it is proven in examples such as the Apple App Store and the Android Marketplace.

Once third party (or even OEM) apps became a reality, it would seem that there would be no end in sight to the amount of tools that we could have at our disposal. How about an app that not only embeds the regular EXIF info with a photograph, but also includes details about off-camera lighting and flash power? Given the currently technology level seen in off-camera lighting solutions, this seems very feasible. Something like this would be infinitely useful for teaching and sharing.

Do you think that in-camera apps are a possibility? Do you have any ideas for apps that could be installed in the camera of tomorrow? We would love to hear your thoughts!

Posted In:
Other
Editorial Photography
19 Comments

I don't think it'll happen, and I personally don't want it to happen. It's fine to have custom firmwares such as Magic Lantern (which I have on my 60D), but having separate applications for a DSLR would be a total nightmare.

Geez... now I'm disappointed. 2008 called to tell you this is already happening for some time. Check this article on CHDK: http://lifehacker.com/387380/turn-your-point+and+shoot-into-a-super+camera. BTW: I've tried it myself and I can honestly say that a point-and-shoot is not a game console.

The only thing that is keeping us back is the encrypted camera firmware. But some people already have successfully reverse engineered some cameras:
- http://philipbloom.net/2010/06/11/3rd-party-firmware-transforms-wimpy-gh...
- http://nikonrumors.com/2011/12/26/nikon-d5100-unofficial-star-wars-theme...

CHDK, while a cool concept, is not supported by any manufacturer, and is in no way simple enough for the average consumer to use. This is a much shoddier approach than being able to log in to a Canon or Nikon app store and being able to download quality, refined applications that are approved by the manufacturer.

"quality, refined applications". It's been a while since I heard someone appreciate a good piece of software :). I'm probably cynical, but for that we need (at least partially) open firmware. And I don't expect to see that happen in the next 5-10 years. Just see how long it took for the car industry to settle for a steering wheel, stick, clutches, paddles etc.

The reason why I dont see it happen is called protectionism. And that is the same reason why no camera manufacturer considers supporting CHDK.

I think it's a great idea!! Makes me a little overwhelmed thinking about it though!
- freshphotoblog.com

I guess it would be a smart decision to allow others to build apps for a camera. It would only strengthen the camera brand. Perhaps Samsung would be the first to support this, they have more experience with apps for hardware than Canon or Nikon.

i remember a time when the big question to be answered was...."What good could possibly come out of the internet?"  I no longer doubt the prospects of what future technology holds.

Great! But it should go further. If a hyperfocal distance app is there, it should not only calculate, it should also SET the focus correct and give you a chart with changes if you change the aperture. And many more would be possible. :-)

It would be interesting to see how specific apps would be navigated from a camera menu. But added functionalities through a camera menu would be great

I think you gave some great examples of what kind of apps would make a pro camera great. Honestly, I've been wondering why this hasn't happened already. If the cheapest model smart phone can have built-in GPS, WiFi, etc, then why not a $6000 camera? Seriously, why do I have to pay extra for those things?

When it comes to apps, I know what everyone is afraid of: games and Twitter. But here's the thing. You don't have to participate! That's the great thing about apps. If you feel that having a Twitter app on your camera is stupid, you don't have to download it! Apps are the perfect way to add functionality that a small number of users want, but not others. Canon and Nikon can't include every single feature that every single user wants. But by allowing apps, you can add any crazy feature that you can dream up. Your imagination and the camera's hardware are the only limits.

While I'm pretty certain that we won't see this being implemented by camera manufacturers themselves, I'm pretty sure that in the near future this will be done by other developers, as we have already seen a lot of extra great features both in CHDK and Magic Lantern.

Do you not want video either?

here is a video I uploaded on Dec. 16 about having a Vintage looking camera with all the apps etc.
http://www.sundayphototalk.com/page/2/

I called it G1X but a month later Canon came out with that model :) Nothing closer to what I planned in my G1X tho :)

Oh hell no! If my camera was like my phone I'd have to worry about my camera freezing up right in the middle of a wedding :(

I think it is going to happen and I think it's inevitable. Steve Jobs saw cameras as the next industry he wanted to shake up, so if Canon and Nikon don't do it themselves, Apple might force their hand.