Certainly, we've talked about how to always protect your photos and watch for thieves. In fact, Fstoppers' very own writer, Noam Galai has had his photo stolen, and turned into one of the most iconic pieces of pop art in the last 15 years. So what happens when Samsung foolishly awards a fraudulent submission a Samsung NX300 camera?

The image, originally taken by Hengki Koentjoro was submitted to Samsung’s #LiveInTheMoment instagram contest by a user who simply flipped the image horizontally, and applied a filter. Claiming to be his own photo, Instagram user bogdhan was then publicly contacted by Samsung about winning the category #MyCommute, and awarded a Samsung NX300 digital camera, two months ago. 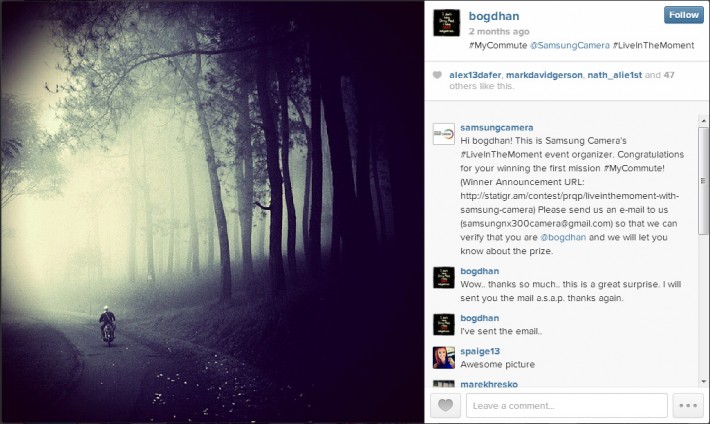 However, it wasn't until yesterday that the truth of the origin of the image emerged. The image in fact was not his own, but Koentjoros. Hengki Koentjoro was notified of the fraud in place, and that the photo thief had actually won a contest using the stolen image.

Samsung has not yet responded to the claims, but thousands of photographers and fans have come forward, publicly criticizing Samsung for allowing copyright infringement to win a contest and for their ignorance on the case. However, Samsung has removed the photo from their Facebook page.

As for the user and thief, he also has been receiving his own stream of criticism, causing him to delete his Facebook profile, and dozens of messages on his instagram photo contest winning thievery. Leaving only the following message -- 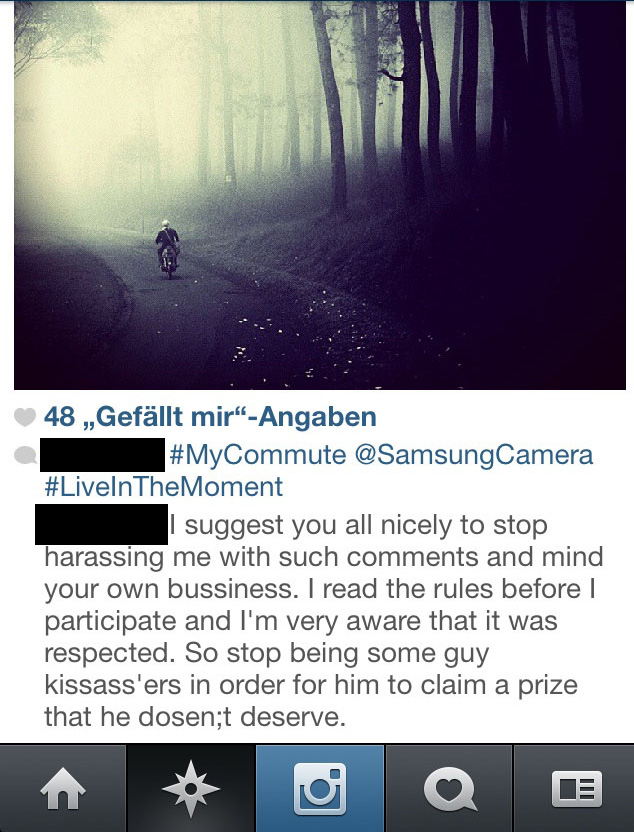 “I suggest you all nicely to stop harrassing me with such comments and mind your own bussiness. I read the rules before I participate and I’m very aware that it was respected. So stop being some guy kissass’ers in order for him to claim a prize that he dosen;t deserve.”

Hengki Koentjoro is represented by TobinOhashio Gallery Tokyo, and they're not happy. Saying that removal of the entry would not be enough, calling the acts of both Samsung and bogdhan “despicable”. Adding “Just deleting the picture, sending a kind mail to the original photographer and hoping that ‘everything is alright now’ is far not enough.”.

I've reached out to Samsung for their response on this issue, and have yet to hear back. Be sure to check out the amazing work from Hengki Koentjoro, original creator of the image.

UPDATE - Samsung's Statement on the issue --

Samsung Camera took down the photo which was identified as stolen from all social media channels, disqualified the user for copyright infringement and violation of contest terms.

"Thank you for alerting us in regard to this issue. We take copyright infringement very seriously and it is very unfortunate that present case has taken place. We have disqualified the applicant of this picture and he is no longer the winner of the contest neither will he receive the prize. Further we have taken down the winner announcement posts from all our channels."

Posted In:
Other
Business
Pictures
190 Comments

Business / November 19, 2019
What Are the Best Ways to Send Traffic to Your Photography Website?

Business / May 17, 2018
Three Huge Reasons Every Photographer Should Be Writing

Hengki should get the camera.. plain and simple.. And get his photo put up for the winner.

I agree! No question about it!

well, he wasn't participating this event, so he doesn't deserve it...in my opinion...

He was participating, he just didn't know he was. His image won so it follows he should benefit from that.

Im sorry but that doesnt even make sense.
In that case the event should be cancelled or re-made, and the guy who did that photo should not get the reward but deal with the thief. How? I dont care. But the reward should not be given to any of them because:
1) the winner did not take the photo
2) the author of that picture, didnt participate the event so how can he win if he didnt even know about the event?
Jeez.

He did participate. An unwilling participant, but a participant nonetheless. Samsung was negligent (there are several checking services online that would instantly reveal the original) and should reward him.

What are some of these checking services you mention? Sounds like a must have resource for photogs.

There's some amazing new inventions on the internet called 'search engines' - you should check them out sometime.

or maybe even Google Search By Image - http://www.google.com/insidesearch/features/images/searchbyimage.html

You and Samsung... both bloody lazy lol

The LOL here is that everybody already knows about Tineye and reverse image search. I was mistaken in thinking that you had valuable new insight.

Ask a stupid question and you'll get a stupid answer :)

It's not a stupid question if you had "new" information as in "new inventions" you mentioned. I understand now that you were being sarcastic and really have nothing valuable or meaningful to share (instead of old information that everyone already knows about). As I stated numerous times, I was already aware of Tineye &amp; reverse search.

Ask a question and get a stupid, snotty answer, that would make a 13-year old proud, by someone who thinks he is clever, which you most decidedly are not.

Any rules against entering someone else without their knowlege?

It could be argued that if the picture isn't yours, then you basically submitted a participation "in the name of the author". no?

Well, no.
Because, i assume, there was no accepting the event participation by an author of the original photo and if you want to participate in an event or anything you have to agree on the terms of use. Its like when you create an e-mail account, or sign something so your kid can go to a trip; you have to agree on that.
The picture was used against authors will; you cant force people to do things they dont want to. But sure, if someone would submit my picture so i can win a camera, id be like 'sure thing, go ahead'; but first of all i would like to know about that because i dont want to win a female bra, tampons or something like that.
You cant submit someones picture in a contest without letting them know about it and if that happend, a person who used that photo should take responsibility of that; that means the contestant was disqualified because of cheating. If the author of the picture want to, he can take some court of law action because his picture was used by someone else.
What Samsung did wrong is that they didnt bother to check if the picture is really taken by the contestant, but clearly, the apologized the author, thats a good thing.
But still, i dont know about their terms of use so all i can say is what i think about that. And also im sorry about my english.

Who would want a Samsung camera anyways?

As opposed to a man bra? Would you like to win one of those? Because I'm running a contest for one.

Sure, let me know about the rules;)

Because it's a "photo" contest and not a "photographer" contest? If the legitimate author of the photograph agrees to the terms and conditions of the contest then he should be awarded the prize. That is, of course, if he wants it. At this point, Samsung must be creative in their handling of this but that's due to their own negligence. Perhaps they should award the prize to the runner up and quietly compensate Mr. Koentjoro for their ineptness.

Yes, you are so right about that, but the thing is that the real author of the photo did not accept terms of use of the event. Did he?

No, as far as I know, he has not. However, he should be given the opportunity to accept the terms retroactively.

Like... "Were sorry that your photo was stolen but maybe you want to accept our terms and win this brand new camera"?

The accepting of terms is merely a formality and not really necessary given the mess they've already created. If I were in charge of contest PR the letter would read something like this...

"Dear Mr. Koentjoro, it has come to our attention that the winning submission to our Live In the Moment Photo Contest was entered fraudulently by someone claiming to be the legitimate author of the photograph. Our research indicates that you are the photo's author and, as a result, we would like to rectify this embarrassing oversight by offering you the grand prize of a Samsung NX300 digital camera. In addition, we feel compelled to go even further by offering an additional five (5) Samsung NX300 digital cameras (in your name) to the visual arts department of a school of your choosing. We sincerely apologize for this unfortunate lapse in contest oversight and commit to being more diligent going forward. We graciously thank you for your understanding in this matter."

Samsung is a $200B company, donating $4500 (retail) in product to salvage their credibility seems beyond insignificant.

Oh, that makes more sense, sure thing. That would be so kind of them if theyd do as you say.
But i wasnt talking about the Samsung company. I know they acted like fools, i really do; i wouldnt even call the event serious because they didnt bother to check the photo.
Once again, im talking about the prize, not about fixing Samsungs mistake or what could they do to make everyone happy. All im saying is the thief shouldnt get the reward, because he used someones photo as if it would be his own work, as well as the original author because he did not participate the event.
But, he should make any profit out of it because his photo was stolen and he was in the middle of the whole thing, yeah, i agree with you on that.

I was actually alerted by members of a forum once that a video I posted there (my own) had been seen on break.com. I head over to check it out and there was my video on the front page submitted by someone in another country who had re-uploaded it as his own.
To make it worse, it was on the front page because it had won $600 in a competition.

After a few emails to break with some proof, and the help of people on b3ta.com (where I originally posted it) they switched the video over to a new account bearing my name. They also transferred all comments, views, shares and such. It still won and I got an unexpected $600 from a website I'd never been on, from content I didn't even submit.

I'd say give the bloke the camera.

it's the right thing to do.

Maybe they are not legally obligated to... but come on.

His image did not win. His image was used to start, but then modified. I don't agree with the theft of the image, but the original was not the winning image.