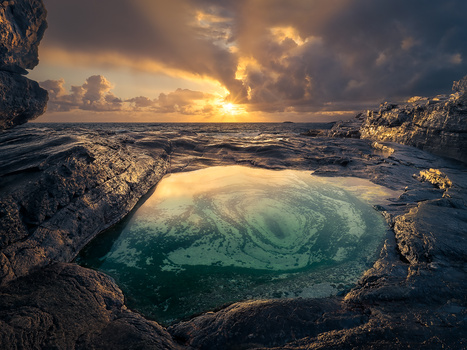 When you've been thinking of an image for almost two years, and you finally have the opportunity go shoot it, and everything just goes your way. This evening was just like that.

Heres a little more info about the shot:

This tide-pool I've been wanting to include in an image ever since i discovered it, on a windful day with rough sea, almost two years ago. Because of the rough sea it was not possible to get to it back then. But last Sunday it was low tide at sunset, not too much wind, and the weather looked promising, so i took a chance and headed out. 1 hour drive and a 45 minute hike later i was out there, where the North Sea crashes against this rugged terrain.
After setting up camp, I headed down to the tide-pool and composed the shot, and made a few exposures of the totaly still water in the tide-pool. Just moments later, the wind picked up, and broke the still surface - talk about luck. Then i started to expose for the sky and the setting sun. The golden light was gorgeous and the lightrays shifting all the time as the sun mostly moved partially behind clouds.
All of a sudden it starts to rain for a few minutes. Luckily I was dry, standing under a steep overhang with the camera. At the same time the sun broke through the clouds and the warm light hit the wet black rocks, making them glow like never before. I guess every thing went my way this evening.

Gear: Olympus OM-D E-M5ii + m.Zuiko 7-14mm f.2.8PRO and square polariser from Nisi.
Edit: Photoshop (This shot is a time-blend composed of six shots taken during a 20 minute time frame, to have the still tide pool, the best sky, the shimering wet rocks, and for dynamic range)

Keep it up.. Buddy 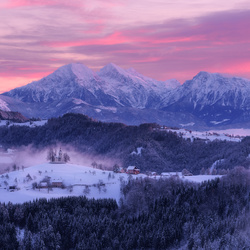 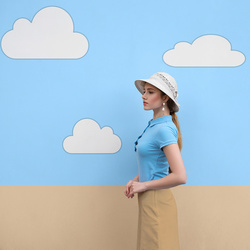 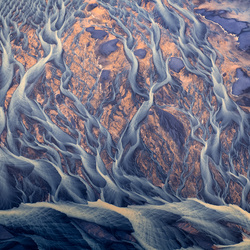