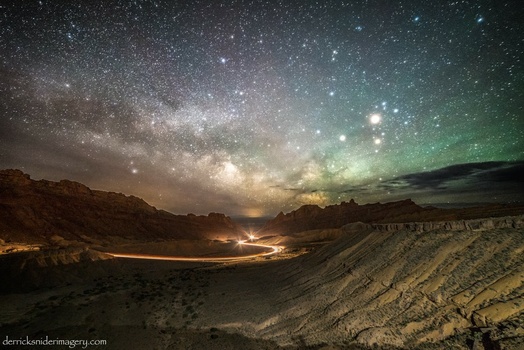 This image is a blended image. One 30 second image at 5000 ISO and an aperture Of 3.2 for the sky and Milky Way, and one image at ISO 800, f/5.6 at nearly 5minutes for the car trail. I had to make several attempts to get the timing just right for the car trails that descend down a “V” in the San Rafael Swell along I-70 near Green River Utah.

The two images were then blended together in Photoshop to capture the right exposure of the stars and car trails.

The image was shot from the Spotted Wolf Rest Area (something I have never disclosed until now), thus the title..... Lighting from the rest area illuminated the foreground making things rather difficult with a 5 minute exposure so I also blended part of the right side foreground in from a third “middle ground” exposure as well.