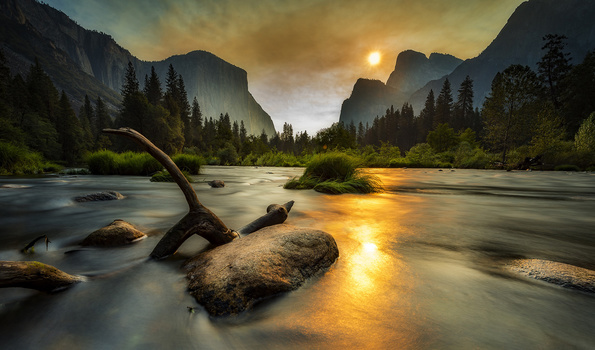 The Morning Burn Off

This past summer I took an epic road trip through the US to some of the spots I had dreamt about shooting at. This shot happened by pure luck! I had planned on being in Yosemite for a couple of days but sadly a forest fire had just started the day before and the smoke was filling the valley. I wanted t stay but the smoke was too much for my lungs and after the first night I left. On my way out of the park I stopped by the iconic valley viewpoint and thanks to the smoke there were still crazy colours in the sky. I got my gear out and precariously stood on the edge of a rock, praying I and my camera would not fall in. I'm glad I stopped, about a month later I saw a report that the entrance road had fires burning along it, I don't recall the extent of the damage but it goes to show you should always trust your gut and shoot when you got the chance.