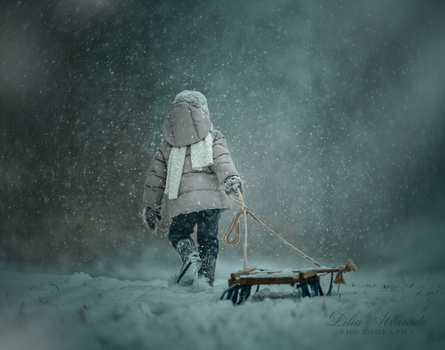 This image was taken in Northern Virginia, USA during the Jonas winter storm 2016, also known as “Snowzilla” in the D.C. area. It’s the first Category 4 winter storm to impact the D.C. region since the Presidents’ Day storm of 2003. My family was pretty excited to see a lot of snow; we were hoping to build a snowman since my kids never really have experienced a “real winter”. Well, we got more than enough. Virginia, Washington D.C. and other nearby areas declared states of emergency.

I took the photo during the afternoon, an hour into the blizzard, where the snow wasn’t too heavy and we were able to walk around. I used my Canon Mark III, paired with my 200mm lens, dutifully wrapped and taped in cellophane because the whole setup did not fit into my camera's rain cover. I used natural light.

Thank you for your input! I am not a meteorologist, the image was taken during Jonas (Wikipedia: https://en.wikipedia.org/wiki/January_2016_United_States_blizzard). I title my images as it pleases me :)

I get a sense from your photos that I am experiencing a memory- from the inside.

Awe, I am glad to hear that!