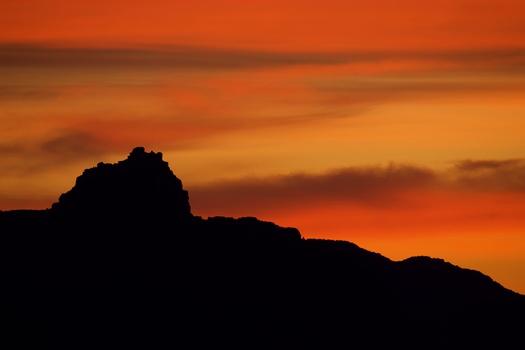 Jupiter has the lights on this morning! A geologist by the name of Charles Dutton had the honor of naming many of the landmark peaks within The Grand Canyon. Mr. Dutton felt that The Grand Canyon was such an impressive geological feature on our planet that the names should reflect all of the world’s cultures, except, of course, our own Native American culture! Despite that, I do love the names he gave this enormous collection rimrock crags and castellated knobs: Cheop’s Pyramid, The Tower of Set, Wonton’s Throne, Solomon Temple, Budda Temple, Tower of Ra and my personal favorite; because of its position at Sunrise: Jupiter Temple. Jupiter was the Roman’s chief god. His weapon was the thunderbolt. If you’ve ever been up here hiking on the rim during a monsoon storm, your fear of Jupiter would increase with every bolt; but, Jupiter rests today in the blood red glare of a rising Sun.

Some incredible shots here Hank. Beautiful! I am working on a video on adopting horses for the ASPCA and I would like to have your permission to use your YouTube video of The Last Wild Herd of Buffalo in America that you shot in Yellowstone. I would give you a credit of course.