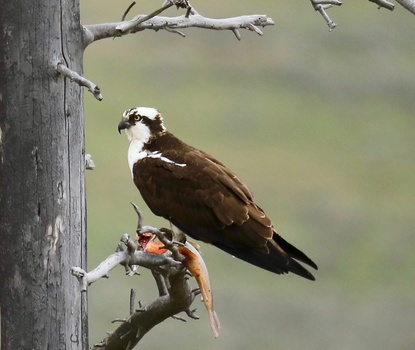 I spotted this Osprey with her catch along the western end of the Lamar River. I don’t know which of these two lovely creatures intrigues me more: the bird or the fish.
Judging from the copper hue and large spots, the fish is a Yellowstone cutthroat trout and is the most highly prized and endangered game fish in the West. It is strictly catch and release, not catch and eat, unless, of course, you’re an Osprey! It’s Latin name has a strong Kentucky connection. It was named Oncorhynchus clarkii to honor one of my favorite Kentuckians: Captain William Clark. Both the fish and the man share a similar and defining trait: the color red. The common name "cutthroat" refers to the distinctive red coloration on the underside of the lower jaw. Captain Clark was often identified by his red hair, especially by the Native Americans, many of whom had never seen a man with red hair. Captain Clark, little brother to George Rogers Clark and co-leader of the Lewis & Clark Expedition, was raised on Mulberry Hill just outside of Louisville in his older brother’s home: Locust Grove, a spot I know well. Locust Grove is the only verified remaining structure west of the Appalachian Mountains known as a stopping point for Lewis and Clark.
The bird is an Osprey. One of my favorite old Romans is Pliny the Elder. He invented the editorial model for what we know as the encyclopedia, when he published: "Natralis Historia." He reported that: “parent ospreys made their young fly up to the sun as a test, and dispatched any that failed.” Pliny died sailing too close to the eruption of Mount Vesuvius, which had already destroyed the cities of Pompeii and Herculaneum the night before, in order to study the eruption and save the family of a friend. As always though, Shakespeare has the best description of an Osprey, when he writes in Act 4 Scene 5 of Coriolanus:
"I think he'll be to Rome
As is the osprey to the fish, who takes it
By sovereignty of nature.”