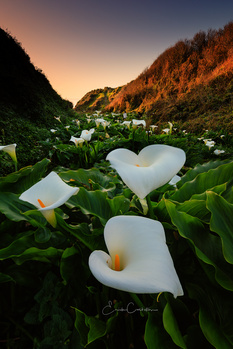 Among the Calla Lily

Along the scenic California coast, lies Garrapat State Park. This strip of beach is home to an area known by the locals as "Valley of the Lilies" where Calla lilies grow wild. As it was Superbowl Sunday the big American game day, I took the opportunity to go an explore the coast to see what the condition of the lilies were, as the peak usually comes in the month of March. Having had recent warmer weather than usual, I figured it may also impact the bloom cycle and perhaps have the flowers bloom earlier than usual. I arrived, not expecting much from the area, it was more of a scouting mission. As I got to the location, I quickly realized what I was expecting, the bloom had started much earlier than I thought. I could see most had already started to be in the later phase of the growth. I walked around for a bit, looking for some compositions that may work on what I had in mind. I set up my shot over a group of flowers that still had some life in them.