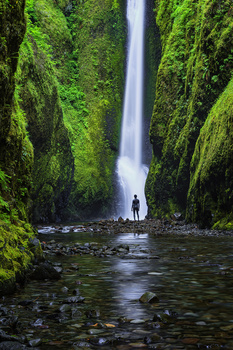 A few years, back a friend invited me last minute to join for a trip to Oregon on a fourth of July weekend. It was last minute so I wasn't sure if I could find hotel accommodations, so I declined. I had never been to Oregon and was on my bucket list. A few hours later called me and said that one of they guys from the group had to cancel so there was a spot available for me If I still wanted to join them. I jumped at the chance and said sure I'm in, not knowing where exactly we were heading. The last thing he said, oh make sure you get a wetsuit for the trip. I thought he was joking. This was my first trip to Oregon, so I didn't know what to expect, we arrived and headed into the Oneonta Gorge. It was 7am so not many people were here, we all got out and they each put on their wetsuits and started making the trek in. Now I realized why the suit, the water was very cold, knee deep but still cold. As we arrived at the end we were treated to this beautiful waterfall. I asked one of the guys with us, to stand infront of the waterfall to give it scale and he agreed. I was lucky the other guy cancelled, and lucky to be able to arrive before the crowds to capture the shot. Lucky that I got to see the area before the files of 2017, as this area is now closed to the public due to the fires.