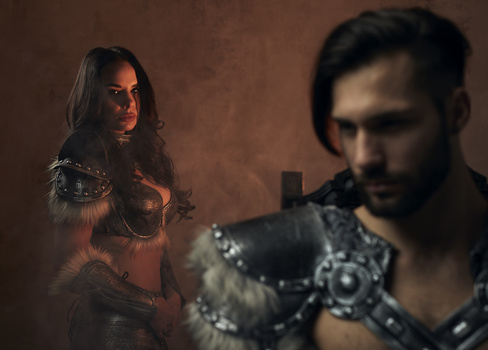 A month ago, a friend of mine reached out to ask if I would be interested in a pretty exciting opportunity to photograph these artists alongside 4 other photographers in a sort of “photographer vs photographer shoot off”. I had been following Rachel’s work for some time now and I must say, I was impressed and I jumped at the chance. The original plan was to pool our resources and put together one epic video highlighting each photographers personal style and techniques and post it all over the internet to share with the world… Epic though it was, no such video was created. It ended up instead, being a big collaboration rather than a versus battle. While assisting each other and worrying about our own shoots, there simply was no time to shoot any video or record any interviews. The concept I decided to go with, was to treat this as an advertising shoot for a feature film or television series. I developed a backstory for the characters to help achieve the expression and mood I was going for. I wanted it to feel dramatic with an underlying theme of betrayal and mystery, so I coached them along, after showing some example images and ideas I had assembled beforehand, they both got the idea and jumped right in to character. Technical details. This was a 3 light setup with a backdrop supplied by Robin, the host of the shoot. I brought in an old rustic, hand carved chair to act as the throne that Jeremy sat in, placed a bare bulb strobe right behind it, covered it with 2 layers of diffusion and a CTO warming gel to motivate a fire light and act as the main light on her face. behind her I placed a gridded beauty dish to give her a bit of separation from the background and a little pop of cold tones from the armor, to get a bit of color contrast with the orange “fire”. Jeremy was lit by a deep octa to camera left, this gave the image an edgy look to play in to the dramatic concept. Last but not least, I added a thin layer of haze to add an overall atmosphere to the image and create a sense of depth, occasionally throwing in a nice billow of smoke to sell the viewer on the idea of there being some sort of fire as the main light source. The shoot didn’t take more than 20 minutes, granted there were some technical difficulties, i.e. the hazer bonking out.