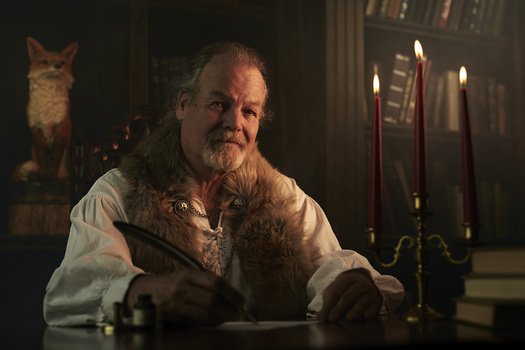 I had been working on a concept for an advertising campaign centered around a local winery. I have known the family for a few years and have a pretty keen understanding of the particular aesthetic they appreciate. A rustic, medieval, candle-lit, low key sort of style. When I approached them with my idea for the this first "Test" image, they were excited to work with me and we scheduled a shoot for the following week. The concept I came up with was to build characters for the family members to portray and photograph them accordingly. For this image of Gregg Lewis, the owner, I wanted to convey him as a wise and noble author, sequestered away in his study. His business was built around stories he created to entertain his children when they were young, about a heroic fox and his friends, and the perils that come along on the heroes journeys. I thought the character fit because Gregg was very much the author of his own story and the legacy of The Dancing Fox.