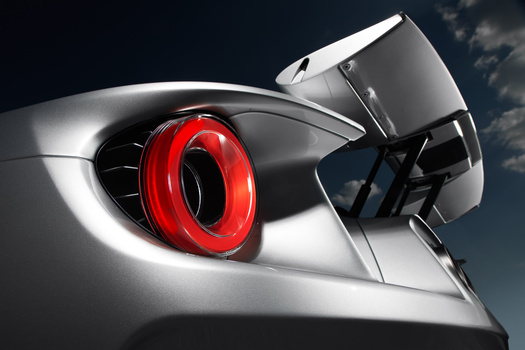 I learned a valuable lesson the day I made this image: never be afraid to ask for an opportunity, because the worst answer you can get is "no".

Having arrived a half hour early for a joint promotional event between Ford and Michelin (an event which I'd only heard about 8 hours prior), I decided to take a chance and ask one of the employees if I could get some photos of a brand new Ford GT they had on display at a location I knew of just 2 minutes down the road. The answer I got was totally unexpected. "Sure! But we've only got 20 minutes." That was the quickest automotive shoot I've ever completed. Though I love the images I got, my most important accomplishment from that day was learning to shut out any self-doubt or negativity when seeking new opportunities. Nothing is out of reach of those who have courage.

The setup for this particular image was pretty simple. I used this low angle to emphasize the car's wild curves and show off the aircraft-like fasteners on the underside of the spoiler. The final image consisted of 3 exposures: one for the taillight, one for the spoiler, and one for the rest of the body. All were lit with a handheld strobe w/ HSS and a 7" dish modifier. I used a shorter shutter speed and circular polarizer to darken the sky. The intent behind this was to mimmick the way that the sky would look if viewed from a high-altitude aircraft, which I thought would go with the spaceship-like shapes of this car.