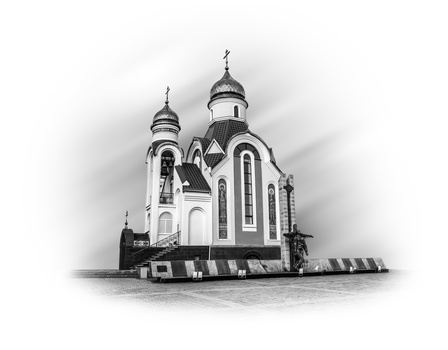 The Church of St. Prince-Martyr of Igor of Chernigov

Concept:
Artistic background blur and discoloration make it possible to separate the main object from the oversaturated background and focus the viewer's attention on the object itself.
Annotation:
The Church of St. Igor of Chernigov is in Vladivostok consists of two floors.
On the top (main) floor is an extension in honor of the Holy Prince Igor of Chernigov.
On the ground floor there is an extension in honor of the Holy Great Martyr and patron of the soldiers Dimitry of Thessalonica and the baptistery (font for full immersion at the Mystery of Epiphany) (baptismal temple).
At the bottom there is a part where the Icon of the Mother of God "The Hearing Lord" is located.
The height of the temple - 21 meters, the area of ​​each of the two floors of 78 square meters
In front of the temple is a monument to the soldiers of the rule of law of the Office of Internal Affairs in the Primorsky Territory, who died in the line of duty.
The temple and the monument form a single memorial complex.
The author of the architectural project - Valery Moore
Prince Igor is a representative of the Olgovich dynasty - a branch of Rurikovich is revered in Orthodoxy as a righteous and martyr. He is also listed in the Catholic calendar as a saint, Igor II, Prince of Moscow.
The chronicles describe him as a brave man and a great hunter.
After the loss of the princely throne, he was tonsured in "схима" and remained a monk in the monastery.
He was brutally murdered by a fierce mob, and his dead body was subjected to mockery.
Buried in the monastery of St. Simeon, on the outskirts of Kiev