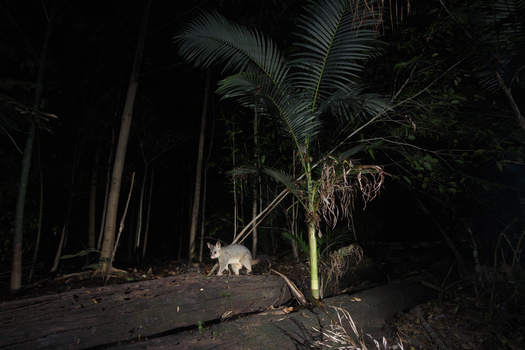 A Common Brush tailed Possum triggers my dslr camera trap in suburban Brisbane, Queensland.
Camera trapping is an approach to wildlife photography that I have only adopted over the past six months. It involves first scouting an area of habitat, deciding what animal you wish to target, and then predicting paths that they regularly take. Then placing a camera in a weather proof box along with wireless flashes and composing for the environment, the only real issue is having to be patient. In order to capture this image, I had the camera set for three weeks in one position, then moved it about three metres to the side and left it installed for two weeks, before finally moving it to the other side of the logs (having to stand in thankfully a mostly empty creek bed below the road behind the camera) and leaving it set for two weeks.
Indeed the waiting game came be tiring and frustrating when you go back to the camera to find it having captured nothing, falsely triggered by a branch falling beside it, or weather splashing water or dirt smudges onto the front lens element.
Even after all of this, the practice is becoming increasingly popular with amateur enthusiasts, wildlife researchers and professional photographers alike.