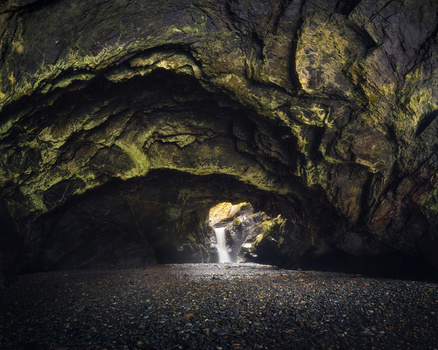 Somewhere along the West Coast of Vancouver Island lies this massive sea cave with a waterfall that drops into it. It's a bit of a tricky shot to get as the only time you can access this cave is during the lowest tide of the month. You also need to carry either a ladder or set of ropes through the forest to get down the cliff.

This is a 10 shot double row panorama at 17mm. I had to do a panorama to capture the jagged rock which circled the waterfall. The combination of the rock and the falls make for a shape that resembles an eye, hence the name "The Weeping Eye"