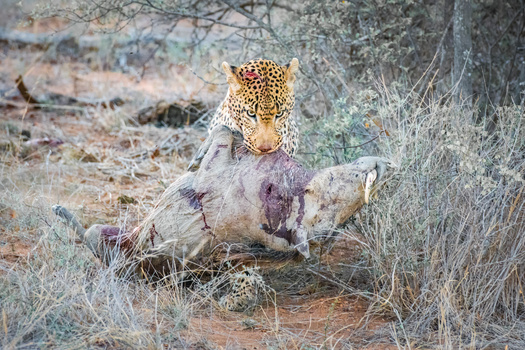 While perhaps graphic to some, the scene that played out over the course of a day in a game reserve in South Africa was mesmerising. We first came across this big male leopard shortly after he had won what must have been a fearsome battle with this big warthog. The gaping wound on his head attests to the ferocity and fight put up by the hog. The Leopard was totally spent when we found him in the morning and we then returned in the afternoon. Almost on cue, he decided to try and move the hog up a tree and out of the range of the night predators. Unfortunately he was still too tired and didn´t manage to get it up the tree. I hope he managed it later. This summed up the daily ferocity of the cycle of life in Africa.

Amazing photo. The story behind this photo is amazing.

Thanks Jerome,
It was an amazing experience. He carried this hog right by us, 2 meters away. Photos cannot convey the sounds and smells.

Great shot. I would want to crop it right in there so the leopard's face and fierce eyes fill up significantly more of the frame.