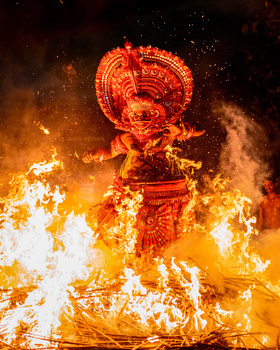 It was 4o’clock in the morning and most of the people weren’t sleeping. People were waiting for Agni Kanda Karnan to show up. It was no normal process. People were waiting for at least 7-8 hours until Kanda Karnan finally, in his flashing red robes and smearing palm-torches, decided to perform Kaliyattam. When the first beating of the Drum was heard, people woke up from their drowsy eyes. They were sleeping next to the walls. As Kanda Karnan entered the temple arena, started a commotion.There are over 200 Theyyams are performed in the Malabar region. People began to turn out in big numbers when Agni Kanda Karnan started his performance. The Theyyam wears beautiful colors. The Ultimate performance of a Theyyam is known as Kaliyattam. But, acts like Agni Kanda Karnan has a special dress rehearsal of a performance called Vellattam. Vellattam is performed without the ornaments and accessories. He climbs to a platform raised in the centre of the arena, blesses people by raising hands. As the Drums beat harder and aloud, he dances to the wild tunes of divinity. His assistants are anxious about the ordinary man inside the costume (who has turned out to be a GOD). They take extreme care to check on anything dangerous. They carry water, controls the torches without spoiling the performance. As the performance reaches the climax, it’s the fire dominates the rituals. Assistants invite Agni Kanda Karnan to a stage resembling a fire place. He carefully climbs to a raised platform. Then the assistants set him ablaze. He takes a spin to splash the fire and douse it. Later he climbs down from the platform, crosses the fire and stands in the arena.