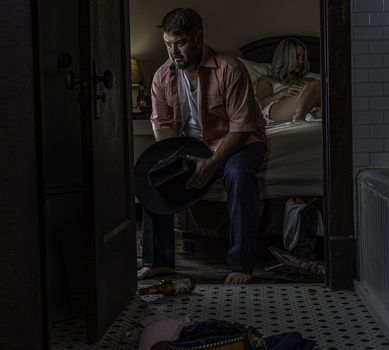 The One Night Stand

I was hired to do an album cover for a Waylon Jennings Tribute album. It was supposed to be titled "Pretend I Never Happened". (an old obscure Waylon tune) So I pitched an idea to the client and he loved it. His wife loved it. So we put it together. Once I submitted the artwork to him he told me his mother was disappointed in him because he was in bed with a slut. Which was kind of the idea. Needless to say he scrapped the whole concept and had me do something much more.. well, boring. He was happy regardless. But now I have these killer images that would have looked so cool on a vinyl record jacket. We set up in a grungy old 20's era hotel. We used two Canon speed lights, scattered some beer bottles and stuck a half dressed model in the bed. The hotel was so seedy there was no air conditioning in Texas in July.