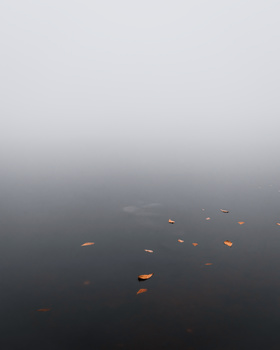 An early morning hike up in the mountains, when the clouds were still covering everything. Visibility was obviously poor, but it gave the scene a quiet and different feeling.
When I got to the lake, everything was covered in the fog/clouds, but the lake was so incredibly still. I spotted some orange leaves floating in the lake, just above some stones under the surface. It was such a beautiful and minimalistic scene, that I had to capture it.

Forgive me for the unsolicited advice; I'd get rid of that leaf on the right edge. Regardless, this is sublime.