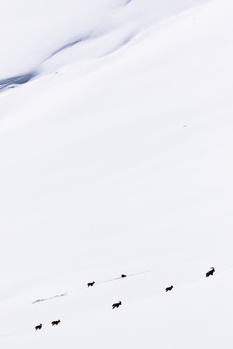 The altitude was 14,000 feet and we were standing at the edge of a cliff the whole day waiting for a snow leopard. The leopard was resting under some rocks, after feasting on an ibex it had killed.

While waiting, I noticed a group of ibexes making their way up the mountain. I zoomed out to include the habitat and waited until all the ibex had their heads up to take this image.

Location: Kibber wildlife sanctuary in the Himalayas of India